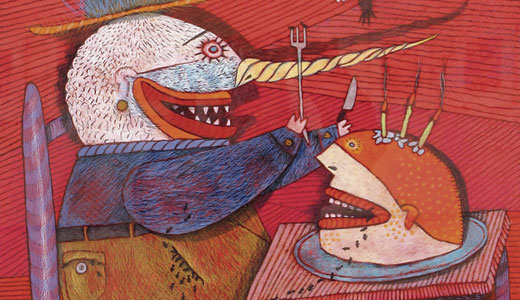 Composer Daniel Knox premiered his long-form song cycle “Black & Whites” one year ago at Manhattan’s 92Y Tribeca Gallery as a multimedia collaboration with street photographer John Atwood. The latter’s prints were projected during Knox’s residency in the First City, a place far enough away to give both Knox and Atwood some necessary perspective on their hometown of Chicago. Knox’s sounds inform Atwood’s capture of the darker side of daily life for the concrete jungle’s everyman, appropriate as the composer has also worked with fellow dark passengers like Swans and David Lynch, and his most recent album was 2011’s Evryman for Himself (yes, his misspelling was intentional and, presumably, artistic). The event is part of KMAC’s Wendell Castle “Caligari” piano series. —Peter Berkowitz

Planets Around the Sun

Planets Around the Sun visit from Maine, though you’d be forgiven for guessing they traveled from Jupiter. The ever progressive NONE Productions brings them to town, along with tour mate Janane Tripp, paired with local art-guitar visionaries Douglas Lucas (dueting here with Aaron West) and R. Keenan Lawler. Planets Around the Sun have issued recordings of free/freak/acid folk and manned-drone psych grooves through micro labels, and have spent much of the past year caravanning across the USA’s astral plane. Originally only planning to perform on solstices and equinoxes, PATS quickly realized they had more to offer and have since played in or on art galleries, tea shops, a tofu commune, boats, planetariums, and yerts. —Peter Berkowitz

‘And Then There Were None’

An anonymous invitation, a mysterious island, a sudden death that shatters the bucolic idyll — these are the first clues in Agatha Christie’s classic whodunit “And Then There Were None.” Ten strangers find themselves thrown together in a deadly game of Mafia, racing against the clock to find the murderer before they become the next victims. This thriller of a show is a first for Kids Acting Against Cancer, a local charity that uses theater to combat leukemia, lymphoma and other cancers. Founded in 1999 by sisters Jaclyn and Whitten Montgomery after their mother was diagnosed with non-Hodgkin’s lymphoma, the group has raised more than $300,000 through productions of “Annie,” “Into the Woods” and more. These days, the kids may be all grown up, but they maintain their optimism and unflagging dedication to combating cancer by doing what they love. —Jennifer Harlan

In Kentucky native Suzan-Lori Parks’ Pulitzer Prize-winning piece, two brothers are facing society’s uncomfortable relationship with race along with their own struggles of being abandoned by their parents as teens. As brothers Lincoln and Booth, local theater veterans Keith McGill and Brian Lee West were the perfect actors for the parts, according to director Kathi E.B. Ellis, who had wanted to direct the show since she saw it on Broadway. “We are extremely pleased to present this important work,” Actor’s Choice producing director Mike Seely says, “especially during the time when our community will be celebrating the birthday of famed civil rights leader Martin Luther King Jr. This play helps to demonstrate the need for vigilance and the fact that some jobs are never done.” —Jane Mattingly

A Jewish Confederate soldier returns home after the Civil War to find his home occupied by two of his former slaves in Matthew Lopez’s drama, part of the Brown-Forman series. “Matthew’s play is where history ends and life begins,” says associate artistic director Meredith McDonough. “I’m really interested in the untold story around events, and Lopez’s play is set in the background of an enormous moment in history. It is a very human story of what freedom means to this family, the responsibilities that come with that, and how difficult and complicated that can be.” Frankie J. Alvarez, Biko Eisen-Martin and Michael Genet will make their Actors Theatre debuts in this show. —Jane Mattingly

To say Harpeth Rising plays “classical roots music” is not to imply that they sound like the “Late Night” house band doing Shostakovich. These mostly Nashville-area residents add banjo, fiddle, cello and hand drums together to fuse bluegrass, folk, classical and chemical X innovating the sometimes-staid Americana genre. Having won fans in England on a recent tour, these young studs (including one Louisville native, percussionist Chris Burgess) could very well become one of those groups who play performing arts venues around the country at $40 a ticket — so now’s a great opportunity to see ’em cheap and say you were there back when. This show has no opening act, because, like Calista Flockhart, they don’t really need any support. —Peter Berkowitz

If the name Enid Yandell has you drawing a blank, get comfy for a little local history lesson. Yandell is a Louisville great (where’s her banner?), an internationally known early 20th-century sculptor who happened to be female at a time when artists were not expected to be. Some of her outstanding local pieces are in Cherokee Park — the Daniel Boone statue and Hogan’s Fountain. Fast forward to 1998, when a group of local and regional female sculptors wanted to create an organization to promote their talents. Thus ENID was born. Their latest group exhibition, which opens Friday from 6-8 p.m., includes sculptors as diverse as Suzanne Mitchell, Mary Dennis Kannapell and Jeanne Deuber. —Jo Anne Triplett

Don’t you love it when people have a good time for charity? That’s what’s up at the 20th annual Cabo Wabo Coat Party Saturday at the Mellwood Arts Center. It’s local folks whooping it up to help others — twice, actually. Cabo Wabo, which is an acronym for “Charity and Benefiting Organization, We’re All Better Off,” will donate all proceeds to Indiana Summer Camp, a local nonprofit that helps improve the lives of children who have cancer by way of recreational activities. That’s good cause No. 1. Attendees also will be asked to bring a gently used coat as part of their admission donation, and these coats will be donated to St. Vincent DePaul, which is dedicated to helping local homeless people. There’s your good cause No. 2. For your donations, you get to party with your friends and enjoy some tunes by The Crashers. —Kevin Gibson

Sculptor/professor Bob Lockhart doesn’t need an introduction to local art lovers, but here are some tidbits. The Louisville Zoo is the home of many animals; it also houses renditions of the resident population, some created by Lockhart. Take a drive to Bellarmine University, where the largest bronze sculpture in Kentucky of a horse and rider (also by Lockhart) is on display. His long dual career of teaching (he’s the founder of Bellarmine’s art program) and sculpting has kept him busy, with more than 100 solo exhibitions, 75 group shows and work in museum permanent collections. His drawings and prints are lesser known and are currently on display at Bellarmine. Lockhart will give an artist’s talk on Friday at 5:30 p.m. in Pasteur Hall with the reception from 6-8 p.m. in McGrath Gallery. —Jo Anne Triplett

Michigan band La Dispute bring their post-hardcore to Louisville Monday. Toeing the line between conventional emo and comparatively more progressive musical genres, singer Jordan Dreyer conveys angst and emotion without necessarily wearing it on his sleeve. Informed by bands like At the Drive In or Thursday, the band manages a fair dynamic both harmonically and tonally that, at times, is not only reminiscent of their influences, but of some of Louisville’s best and brightest. This show will mark the first date on the band’s impending tour with Florida act and No Sleep Records label mates Hot Water Music, who they will meet up with for the remainder of the tour after their Kentucky stop. Doors are at 7 p.m., and the show is all-ages. Make them feel welcome for the first show on their long tour. —Syd Bishop