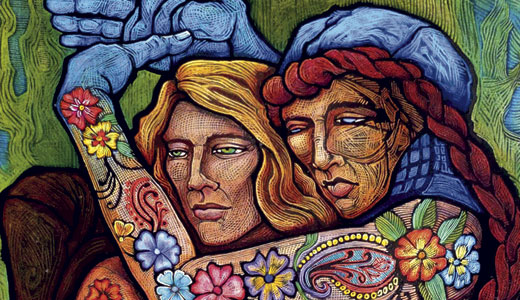 Do you like good ol’ dirty rock ’n’ roll? Y’know, the kind they used to make back in your daddy’s day? Do you want it tough and manly, yet at times enticing to your date? One last question: Do you like Kings of Leon, yet have become ashamed to admit it because they’re so popular and, talent aside, are cliché modelizers when they’re not on stage rockin’? Well, friend, have I got a deal for you: Meet The Weeks. KOL recently signed their Southern friends to their label Serpents and Snakes, and released The Weeks’ latest collection, the EP Gutter Gaunt Gangster, in September. A full-length drops April 30, so get in early before they make you feel embarrassed to like them. —Peter Berkowitz

The legwarmers. The off-the-shoulder gray sweatshirt. The hot female welder who dreams of being a dancer. The bucket of water. Need I go on? Can you believe Jennifer Beals jiggled her dirty bits 30 years ago in “Flashdance”?! Thirty years? To commemorate the anniversary, Broadway Across America brings “Flashdance — The Musical” to town this week. The stage adaptation of the film includes all the awesomely ’80s songs from the soundtrack — “What a Feeling,” “Gloria,” “Manhunt” — as well as 16 new songs written by Robbie Roth and Robert Cary. For all you youngsters, the story is about Alex Owens, a Pittsburgh steel mill welder by day, bar dancer by night. Tousle that hair, cut out the neck in that sweatshirt, and prepare to dance like you don’t have bills. —Sara Havens

Knoxville-based Arpetrio should be pronounced similarly to “arpeggio,” says Alex Mindermann of the live electronica band, which includes elements ranging from trance to dubstep. Mindermann and bandmates Wes Taylor and Trent Little perform with guitar, keyboards, bass and drums, but also with computers. They intermingle the live instruments with horn, vocal and other samples, keeping a steady BPM while improvising together. Arpetrio started as a classic-rock and jam-band cover band but were influenced by seeing bands such as Sound Tribe Sector 9 and the Disco Biscuits in concert. They have recorded three EPs and one full-length, available at Bandcamp, and they allow free downloads to grow support for their live performances. They are happy to return to Louisville and will share the stage with their friends pH Factor, whom they met at Papadosio’s Rudewire Fest. —Martin Z. Kasdan Jr.

Kentucky Museum of Arts and Crafts

Rachel Grimes tickles the ivories Friday night at the Kentucky Museum of Art and Craft, appearing in the continuing Caligari Piano Performance Series. The “Caligari” piano is a special edition model crafted by Steinway in 1990 that references the 1920 horror movie “The Cabinet of Dr. Caligari.” It’s a Steinway in sound, but not in looks — a white and black creation of sharp angles and indigo slash markings. (Sounds awful, doesn’t it? Kind of like an evening inside Dr. Caligari’s cabinet, perhaps.) Anyhow, there’s nothing scary about Rachel Grimes, a performer and composer best known locally as the star of the indie chamber group The Rachel’s. —Bill Doolittle

Straight out of Raleigh, N.C. (the unofficial alt-country headquarters), American Aquarium has seen more than a few fellow promising bands, romantic flings and booze-fueled highs come and go in the six years and five-plus albums they have been performing and touring together. Containing a genuine raw rock element with just a little bit of twang, American Aquarium is right up the alley of Cory Branan or Whiskeytown fans. As boys who clearly possess music in their hearts and a little sorrow in their souls, American Aquarium speaks to the cyclical nature of highs and lows and life on the road on latest album Burn.Flicker.Die, which was recorded in less than eight days with alt-country guitarist Jason Isbell. Show ’em a good time; it is the only way to convince them to continue playing music for a seventh year. —Kelly Kettering

The phrase “women’s work” used to convey art created by women, thus automatically making it inferior to anything done by a man. It also denoted art that was deemed acceptable for women to pursue, such as china painting and embroidery. As a result, many female artists left their work unsigned or used a male pseudonym. So while the exhibition title “Women Work” is open for interpretation, it logically refers to work done by artists who just happen to be women, such as Sarah Lyon, Elmer Lucille Allen and Debra Lott. Since the Weber Gallery is part of the Council on Developmental Disabilities, the exhibition also includes work by girls and women with disabilities. The opening reception is Friday from 5:30-9 p.m. —Jo Anne Triplett

There are a lot of regrettable trends in rock ’n’ roll that have occurred over the last few years (dubstep, anyone?), but artists with true soul never go out of style. This is why The Regrettes, based in Columbus, Ohio, root their sextet in the musical heyday that was Motown/Stax and artists like Otis Redding and Aretha Franklin. Still managing to put their own modern twist on this sound, The Regrettes released their debut album Don’t Talk Back! at the end of 2012 and have been opening for acts like The Naked and Famous and Walk The Moon. You will be able to take part in The Regrettes’ latest sweaty, rhythmic dance party at ZaZoo’s on Sunday, and I’m betting the only thing you’ll be regretting about this show is your hangover. —Kelly Kettering

It’s a painfully familiar social situation — being the third, fifth or 13th wheel in a room full of couples. In Stephen Sondheim’s Tony Award-winning musical “Company,” based on George Furth’s book, 35-year-old Robert finds himself at a party full of married friends who are pressuring him to settle down, as if it’s just that easy. But once he spends some quality time with each couple, he learns that getting hitched might not be the pretty picnic everyone says it is. “‘Company’ is quintessential Stephen Sondheim,” says CenterStage artistic director John R. Leffert. “With Broadway classics from ‘Ladies Who Lunch’ to one of the most moving songs ever written, ‘Being Alive,’ audiences will laugh so hard they will cry.” —Jane Mattingly

Shawna Khalily thinks like a philosopher who just happens to express her deep thoughts by way of printmaking. Her new series of woodcuts, “The Veils are Thinning,” have the ability to inspire us to be better people. “I am very interested in ancient and current ideas about where we are going next and would like to engage in the necessary reaction to so many centuries of fear and exclusion, and to help envision and manifest … the next step in human evolution,” Khalily says. “It all begins with us, each individually. The shifts in global positioning and events are making human evolution happen now in a quantum leap unknown since prehistory … according to the … the ancient Maya and Inca cultures as well as to current researchers of consciousness and the soul.” —Jo Anne Triplett