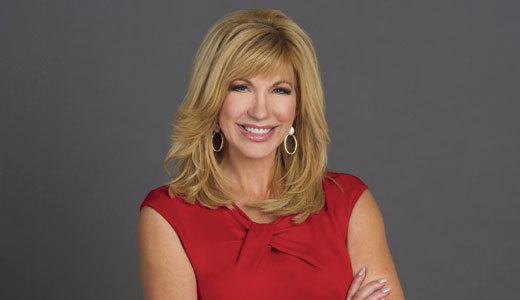 When I was a tween, I wanted to be Leeza Gibbons. As one of the hosts on “Entertainment Tonight,” I thought she had the perfect job — interviewing celebrities and sitting beside John Tesh. I suppose it’s why I always set my sights on a journalism career — I never wanted to talk to politicians or expose lies, but interviewing Julia Roberts and telling people’s stories — that was the ultimate goal. Luckily I’m now working in the field, and although John Tesh isn’t my coworker, I’ve still been able to interview the likes of Barry Manilow, Joan Rivers and Nancy Wilson. Gibbons will be in town tonight for a reading and signing of her new book, “Take Two: Your Guide to Creating Happy Endings and New Beginnings.” She now co-hosts “America Now” on NBC and “My Generation” on PBS. Let Leeza be your guide to a happy ending. —Sara Havens

‘Once on This Island’

It’s difficult now to think of Haiti without painfully remembering the earthquake, but the U of L African-American Theatre Program’s current production takes us back to pre-devastation with a Caribbean fairy tale musical. Lynn Ahrens and Stephen Flaherty’s “Once on This Island” weaves song and dance with Haitian religious beliefs and socioeconomic themes to tell the story of a romance between a peasant girl and a wealthy boy she rescues from death. “The mismatched lovers are much like the ‘Little Mermaid’ fairy tale but with a tragic twist and calypso flavor,” director Nefertiti Burton says. “The cast brings this story to life with a triple play of singing, dancing and acting.” —Jane Mattingly

The Kentucky School of Art continues to bring acclaimed artists to town through their Visiting Artist Program. Their next presenter is Shahzia Sikander, who has expanded her talents as a miniaturist into new media and multiculturalism. Included in her lecture will be screenings of her recent animated films. One of her latest works, “The Last Post,” is inspired by her interest in the British colonization of India. “Over the years, I have worked in a variety of mediums and formats, including small detailed paintings, murals, animation, installation, video and some collaboration with other artists,” Sikander says. “All the while, I have mostly been interested in cultural and political boundaries as a space for opening up new frameworks for dialogue and visual narrative.” —Jo Anne Triplett

Before he watched his career as director of the Central Intelligence Agency implode over his less-than-secret dalliance with a journalist, Gen. David Petraeus made a name for himself as the commander of operations in post-U.S. invasion Iraq and, later, Afghanistan. In his new book “The Insurgents: David Petraeus and the Plot to Change the American Way of War,” Slate “War Stories” columnist Fred Kaplan offers a penetrating glimpse into the former general and his coterie of “soldier-scholars” and how they changed the bureaucratic culture within the military, and evolved the nation’s fighting forces to meet the threats posed by urban insurgents. With more than 20 years as a war correspondent and foreign affairs reporter, Kaplan will talk about his book at a free-but-ticketed event as part of the Authors at the Library series. —Jonathan Meador

Historical novelist Alison Atlee is coming to Carmichael’s to promote “The Typewriter Girl.” This trade-paperback original is the debut for the local author, and it’s garnered significant attention (e.g., starred review in Publisher’s Weekly) even before showing up on store shelves. Betsey Dobson wants to move ahead in life just as England is moving ahead into a new century — the 20th. She understands that she can’t depend on luck and the kindnesses of employers and those who otherwise have authority in late-Victorian society. Unfortunately, Betsey’s means to act upon ambition might just have caused her professional downfall. But can she find a truer calling in less-traditional circumstances? A seaside resort — and the companionship of a man whose talents and lifestyle shade just a bit toward a realistic version of steampunk — are beckoning to Betsey. A bright career beckons for Atlee. —T.E. Lyons

Robert Plant. Alison Krauss. George Strait. Patty Loveless. Dwight Yoakam. These are just a few of the prominent Americana and country artists Jim Lauderdale and Buddy Miller have collaborated with throughout many decades in music. However, their most recent collaboration is with each other, as these two vocalists/guitarists released the simply titled Buddy and Jim in December. Now on tour together, the duo make their way to Headliners. Listening to Buddy and Jim, it seems fairly obvious that both artists are based in Nashville, as many elements of that Hank Williams-esque Tennessee twang make their presence known in dance numbers like “The Wobble” and the ballad “It Hurts Me.” And yet, some songs maintain a modern twist; I can imagine “Vampire Girl” being played on the jukebox at Merlotte’s on “True Blood,” down in the sticky Southern town of Bon Temps. —Kelly Kettering

The late Barney Bright continues to be an honored sculptor around these parts. So honored, in fact, that to celebrate his memory takes three exhibitions, all organized by the Arts Council of Southern Indiana (ACSI) in “The Barney Bright Legacy — Past, Present and Future.” Located at ACSI, “Searching for Barney Bright” discusses his important sculpture “The Search.” Additional info is featured in the “History of ‘The Search’” at the New Albany-Floyd County Public Library. The local sculptors’ group show “Bright Lights” is at the Resch/ACSI Gallery. Reception dates vary; see the ACSI website for details. Former Bright assistant Ed Hamilton will lecture on Feb. 21 at the New Albany-Floyd County Public Library. Hamilton is also part of the March 9 Public Art panel discussion, along with Bright’s son Jep Bright. —Jo Anne Triplett

The Louisville and Lexington-based label Karate Body Records brings us this double-header of intelligently crafted American music, also starring locals Silver Tongues. Matt Duncan is a classically trained instrumentalist and singer/songwriter 20-something who records ’70s-style, Rundgren-esque smart pop for Lexington’s Hop Hop label, run by James Friley of Idiot Glee. His first full-length album, Soft Times, was released on Jan. 15, after a successful EP, Beacon, in 2010 that led to song placement on the TV series “The Vampire Diaries” and “Private Practice.” Louisville’s own Silver Tongues are angelic ambassadors of rich sonic textures, delicately reaching down deep inside as a wave of peace and harmony overtakes you. And then you contemplate how one band could alter your DNA as you wait at the bar. —Peter Berkowitz

I’d like to sit in the studio with singer/rapper/auto-tune aficionado Future just so I could witness his wanton disregard for The One. Hell, I’d be happy if he could clap on one and three. I’ve had several conversations where the mouth pointed in my direction fixed its lips to praise Future’s songwriting and performing ability. This bodes well for Club Euphoria, and the city at large, as this is yet another in what has been an extremely quiet but pretty stellar trend of top shelf hip-hop and R&B talent getting bookings in Louisville, all without the assistance of the city’s more prominent promoters and venues. Over the last several months, clubs and bars like Euphoria and Cole’s Place have been bringing national acts to the city with large degrees of success. Salud Euphoria! —Damien McPherson

Imagine, if you will, that there existed an intersection between instrumental collage-style psychedelia and CCR. Here lies Blues Control, a Pennsylvania duo just as likely to meditate on a sonic texture or looped sample as they are to show a little guitar heroics. Their newest album, Valley Tangents, sees the Drag City act exploring ’80s synth sounds set to driving, tape-delayed beats, with the occasional guitar solo thrown in for good measure. Of course, if their live recordings are any indication of their predilection for detour, this show promises to be anything but predictable. They will be in good company with two Sapat-related projects opening: the experimental Raw Thug and the much-anticipated premiere of Jonathan Wood and Lowe Sutherland’s duo. If you crave the unexpected and avant-garde, Zanzabar is where you want to be this night. —Syd Bishop