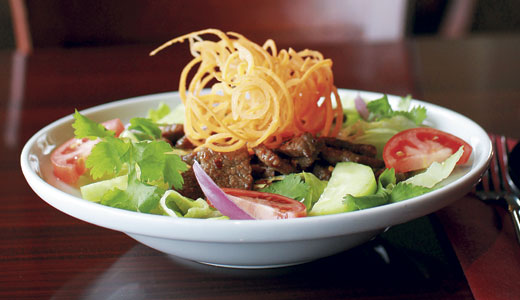 The sun shimmers like a brass gong in the pale, washed-out desert sky. There’s not so much as a breath of cooling breeze. I can see a big cactus, but it’s not much good for shade. Thirsty. So thirsty. The sun beats down, baking, burning. And then my eyes pop open, doing the familiar where-am-I blink, and hey! I’m home! In bed! And I have never been so thirsty.

About four big glasses of cold water put that right, and soon I’m sinking back into a calmer sleep, thinking as I drift off, “I’ll bet it was the pad Thai.”

Or maybe the Nam Prik Ong lettuce wraps, or the Thai soups? Looking back on it as I tasted the leftovers from Simply Thai’s Middletown branch the next day, I think there was a hefty dose of salt or soy sauce alongside the chile peppers in that happy endorphin-boosting burn.

I have long rated Simply Thai’s St. Matthews operation among the city’s best Thai eateries, and that opinion didn’t change when I visited it again a few months ago. I’ve been delinquent about getting out to its year-old second venue in Middletown, though, so we finally ventured outside the Watterson the other night to check out its newer suburban branch.

Simply Thai No. 2 is located in a shopping-center space that, among other things, also housed the final incarnation of Mazzoni’s and a short-lived Mexican spot. Its bright and inviting bar and dark wood tables feel comfortable in these digs, although they haven’t painted over the Mexican-look decor, which creates a little cognitive dissonance.

The menu appears similar or identical at both venues, and the Thai fare at the Middletown branch isn’t bad. But I have to come out and say it: Even if we let the salty-as-the-Sahara issue pass as a one-dish aberration, I can’t rank this branch quite as highly as the home office in St. Matthews. A representative spread of dishes ranged downward from good-but-not-outstanding to “meh.”

When a popular restaurant opens a second shop, I often wonder how the small-business entrepreneurs who found glory in a single kitchen will manage to split it into two venues. Are owner Mahn Saing and his Thai-chef wife Chaveewan Saing shuttling back and forth on U.S. 60 to put their magic touch on both places, or must they delegate? Still, I love Southeast Asian fare, and whether my top pick is Thai, Vietnamese, Cambodian or Filipino pretty much depends on where I ate last.

Saing’s multi-page menu is subdivided by category, including appetizers, soups and salads (both of which may be meal-size in Thai cuisine), noodle or rice dishes, Thai curries, entrees (some of which seem to be Thai-American “fusion” creations), and, just to mix things up ethnically a bit, a page of sushi including maki rolls and nigiri bites.

There must be four dozen Thai dishes plus a page of sushi, and pricing tops out in the lower teens with plenty of main-course choices in the single digits. The full bar includes a short but affordable wine list, with most bottles under $30 and by-the-glass prices from $6.75 to $8.50, plus wine-pairing suggestions for Thai favorites, and a beer list with a few craft beers and local brews. Half-price happy hour lured us toward 22-ounce draft beers, a Japanese Kirin Ichiban and a Sam Adams ($6.25 each).

We covered the table with apps and a couple mains, ordering a range of heat levels from 1 to 4 on their 5-pepper scale, and made short work of nam prik ong (lettuce wraps, $6), a spicy mix of chopped pork or tofu with fine-diced cucumbers, onions and tomatoes with crisp iceberg lettuce leaves for wrapping.

Fresh spring rolls ($5), fat cylinders of shredded carrots, cucumber and rice noodles rolled in lettuce and translucent rice paper plus your pick of shrimp, chicken bits, tofu or grilled veggies, were carefully formed but on the bland side, really needing a dip in the accompanying sweet-hot peanut sauce to bring them around.

Pad Thai ($9) was a fairly standard rendition, searing hot at a 4-pepper heat rating, and the apparent culprit in my dehydrated desert dreams. The flavors didn’t pop, I couldn’t find any peanuts or egg in it, and the textural combination of soft noodles and crisp bean sprouts that distinguishes great pad Thai was missing here.

Thai eggplant ($12) offered a good combo of fresh eggplant, carrot, broccoli, onion and mushroom flavors, but there was little variation in texture among the veggie slices swimming in spicy-salty broth.