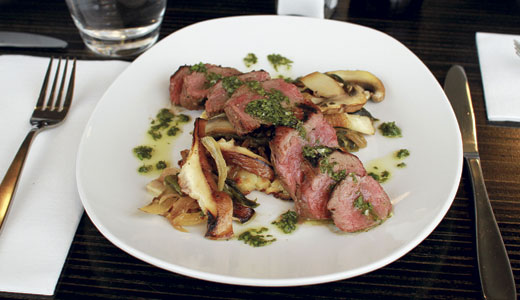 I rolled north along Frankfort Avenue, on through Butchertown and down the hill toward the river, getting ready to hang a left on … hey! What fresh hell is this? I know I haven’t been around here for a while, but nothing looks right.

My iPhone’s robotic voice responded: “You are on River Road.”

“I don’t think so. This doesn’t look like River Road to me! It’s got four lanes, and it’s in the wrong place. So many new things! Strip malls! The front of an old house! And where is the Stop Lite?”

“I found 12 places matching ‘The Stop’ fairly close to you.”

“Never mind! Forget it! Just take me to Relish restaurant!”

“Sorry, Robin, I can’t do that. You’re not listening to the music app.”

This wasn’t working out. So I put Siri back in my pocket and, adjusting to the radically renovated landscape of inner River Road, found my way soon enough to Relish, just down the road from the Big Four Bridge. Relish shares space in a short new strip mall with the reincarnated Stop Lite Liquors, which looks a lot more classy than its predecessor but, sadly, has lost its iconic traffic light.

“They didn’t want it,” the Stop Lite clerk said, cocking one eye toward the ceiling in the direction, I assume, of building management. This is a real loss. If the old Stop Lite’s flashing red, yellow and green beacon was still around, I wouldn’t have had to summon Siri in the first place. Perhaps we should start a Facebook movement to Restore The Historic Stop Lite?

Relish, however, needs no beacon. Word of mouth alone surrounded this new spot with a trendy buzz since it opened right after Thanksgiving. It’s hard to imagine how it could have done otherwise. It represents the re-entry into the Louisville dining scene of Susan Seiller, who owned and put her stamp on the popular Jack Fry’s restaurant from 1987 until 2008.

Seiller, who also ran the short-lived but much-loved Paloma on Brownsboro Road in the early ’90s before turning it over to Azalea, has brought the style that informed Fry’s and Paloma to infuse what could have been a bland shopping center space for Relish with cool, techno-industrial decor. Walls are pure white, as are the simple but stylish plastic chairs; tabletops are streaky black. No shortcuts were taken with glasses or silverware, and even the heavy paper napkins feel like cloth.

And that location amid River Road’s new look may prove foresighted, as it’s neatly situated to serve both business diners on lunch break or commuters who choose the River Road option on their way home from work. (Lunch service now ends at 4 p.m.; there’s no table service for dinner, but a prepared-foods deli loaded with delicacies from Chef Jack Beeson stays open until 7 p.m. Relish is also open 11 a.m.-4 p.m. Saturdays and may eventually add dinner hours, our server said, but don’t expect it soon.)

We dropped in before noon on a weekday, a lucky choice, as the place was slammed by midday. Service moved briskly, though, and we were in and out within an hour.

Beeson’s concise menu is affordable (nothing over $10) and focused on appetizing yet healthy fare from ingredients, a table card assures us, “sourced … from purveyors with sustainable practices. Some local. Some not.” I wish the menu named the sources. Was that Capriole goat cheese on the onion tart? I don’t know. The beef in the churrasco steak seemed to have the texture and flavor of grass-fed, but where was it from? This is not critical information, but 21st century foodies like to know these things.

We loaded up on lunch and took more deli dishes home, and I couldn’t find a nit to pick. The churrasco steak ($9) was perfect medium-rare as ordered, thin medallions over a Salvadorean-style arepa (corn cake) filled with grilled jalapeños and finished with spicy sautéed mushrooms and bright-green Argentinean chimichurri.

The onion and goat cheese tart ($7) was simple and flavorful, fine short pastry topped with sliced onions sautéed dark brown and sweet, garnished with mild goat cheese crumbles and plated with a pile of fresh, bitter arugula tossed in a gentle lemon vinaigrette.

Lentil chili ($3 for a cup, $6 for a bowl) was thick, spicy and rib-sticking. White runner bean soup ($3 and $6) was filled with beans the size of limas, bits of tomato and slivers of chard in a consoling beef broth. A side of roasted beet salad ($3) with thin shavings of ricotta salata cheese might tempt the most ardent beet-hater.

A hefty ration of coconut pound cake with caramelized pineapple and a scoop of Häagen-Dazs vanilla ice cream ($7) was really too much for one, or even two, but we finished it all the same.

Lunch for two exceeded the “budget” level but was worth it, with plenty of food but no alcohol still tallying $36.04.