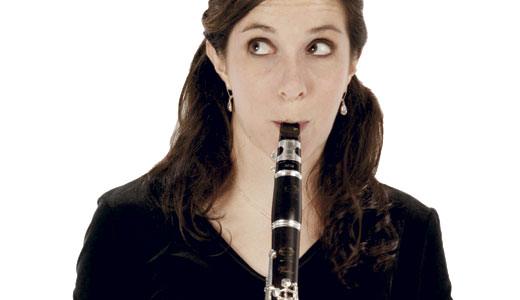 A bit of tension through the strings. Ripples rising across calm waters, as the orchestra sets the scene for clarinetist Andrea Levine to begin the tale.

“Maybe it’s a story of love lost, then found,” says Levine, the principal clarinet of the Louisville Orchestra who steps to the front of the ensemble Friday night in Whitney Hall to perform Karl Maria von Weber’s “Clarinet Concerto No. 1.”

Weber (pronounced vay-ber) follows Mozart and Beethoven in a timeline of classical composers, and, indeed, anyone would find the notes and forms of this concerto, written by Weber in 1811, following right along with those of his predecessors. But the composer is also on his way to something new, Levine says. And we find that out right away.

“The marking on the score for that first solo passage is con duollo — with grief,” Levine says. “That’s not a regular instrumental music marking, with grief. It’s very operatic. Very dramatic. And Weber is known for his operas. He’s a central figure among the first Romantic composers,” helping create the grand opera era of the 19th century.

And so, in performing Weber’s concerto, Levine sets herself in an operatic, storytelling mode.

“It’s not always the same story, but I try to think of something that makes it more vocal,” she explains. “The typical opera plot is someone leaving someone, then coming back. I try to bring out the drama as much as possible.”

Last week, Levine recorded a movement of the concerto to air this week on WUOL-FM Classical. In the studio, she’s light on her feet, dipping just slightly as she cascades down the register — then up on her toes as the notes ascend. A moment later, she leans close to the mic to whisper a quiet passage.

Levine is particularly adept at delivering changes in dynamics — not merely louder and softer, but brighter or more muted, clearer, then more subtle. The emotions of performance.

And then, she’s off! Skittering at speed. Fingers flicking the keys of her clarinet as she flies away.

Weber was commissioned by the King of Bavaria to compose this concerto and two other showy pieces for the premier virtuoso clarinetist of the day, Heinrich Baermann. Levine says Baermann added a flashy cadenza for the first movement that most soloists still play — as will she.

“It’s a beautiful concerto, and people think of it as a gem of the clarinet repertoire,” Levine says. “It’s one of those pieces that sounds very challenging, and is.”

But don’t get too hung up on her theme of love lost and found, she advises.

“That’s just my own little story I made up, and anyone listening to this music might think of a better one,” laughs Levine. “It’s very important to play in a way that gives the audience a chance to think of something else and escape — in their own way.”

‘Scheherazade,’ and a view of the moon
Guest conductor Ryan McAdams takes the baton for the concert. A Fulbright Scholar and rising musical talent, McAdams apprenticed with Alan Gilbert and the Royal Stockholm Philharmonic. He was the inaugural winner of the Georg Solti Emerging Conductor Award and currently is music director of the New York Youth Symphony.

Golijov says the title references Galileo’s first telescopic observation of the moon, described by the astronomer in his “Sidereus Nuncius,” or “Starry Messenger.”