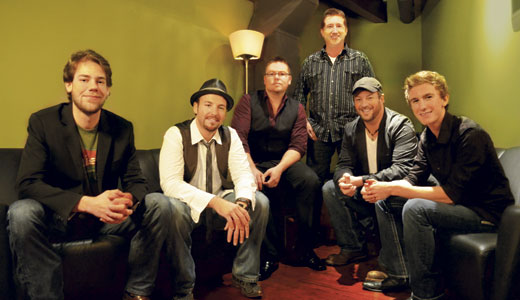 “This past year was inarguably our most successful, as a band, and that’s a great thing to say when you’ve had success like we’ve had through the years,” says Mountain Heart fiddler Jim Van Cleve. “But this past year, we’ve reached … I couldn’t even wager a guess. I’m gonna say probably hundreds of thousands of new people.”

“We decided to rock the boat pretty substantially and we changed lead singers, which can be a giant leap of faith,” Van Cleve says. “We knew it was one we were ready for. We felt real confident in the move. It was the right time.”

What Mountain Heart’s core members wanted was more ambitious than what Gulley wanted. It wasn’t personal, Van Cleve asserts. “Out of absolutely no disrespect to anybody who’s been here, we made that move, and that was the biggest change that we’ve made.”

Gulley’s successor, Josh Shilling, stood out for all the ways he wasn’t like many bluegrass singers. His ability to sing in rock, blues and country styles matched up with Mountain Heart’s new vision. Additionally, he brought skills on guitar and numerous keyboards.

“We knew we had material and musical ideas that we wanted to push the envelope with. We’d become known already, but we’d hit a glass ceiling and become stale,” Van Cleve reflects. “We jumped off of that cliff and (it) turned out it wasn’t actually a cliff — it was a green pasture.”

Van Cleve is no purist and is almost as familiar with marketing concepts as he is with his fiddle. “We knew we had a certain product we wanted to be able to put on stage — that product would be exciting, and it would be fresh and young, and not a bluegrass band.”

Though he proudly declares they can still go there, “where our roots are planted,” the band didn’t want to be “put up in that little cubbyhole and locked away forever. The greater good would never hear any of the musical ideas we were getting into. So we set out to try to shake things up pretty good. And I think we’ve succeeded pretty effectively,” he laughs.

In the past year, the band appeared on an episode of PBS’ new music showcase “Bluegrass Underground,” filmed in Tennessee’s Cumberland Caverns. Van Cleve calls it “the new ‘Austin City Limits,’” though it’s too soon to tell about that. After the show, Van Cleve says, their website, Facebook profile, sales, bookings — “everything just went to a whole new level. It wasn’t necessarily overnight, but we’ve seen a decided upswing in everything.”

They signed with New Frontier Touring, the booking agency that also represents the Avett Brothers, shortly after the episode aired. “So we’re more well-aligned with, say, Avett Brothers/Mumford & Sons now then anything else we’d ever been easily categorized in.”

The best thing about Mountain Heart, says Van Cleve, is their collective musicianship. He left college to play with Doyle Lawson and has since accompanied Carrie Underwood, Sara Evans and many more, and won a Grammy for his 2007 solo album.

Each new band-hire was “handpicked, so they were calculated moves. Each one of those moves has really brought our show performance to a whole new, more dynamic and entertaining level. This band is top-notch session players. Each one of these guys, on their own, has been sought after to play on all kind of stuff … we’ve (now) got Aaron Ramsey (mandolin, guitar and dobro), who literally can play any kind of instrument as well as anybody in the band, just about (laughs), except for fiddle, actually, so my job’s secure! Then we’ve got a 19-year-old guitar player (Seth Taylor) who is just a freak of nature (laughs).

You should come on out, he urges. “The spontaneity of our show, it is a free-for-all; we have no clue who’s gonna play what next sometimes, and we love that.”