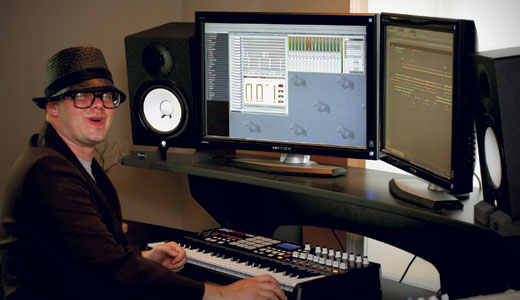 South End resident Ronald Jenkees has been making instrumental music with keyboards and computer programs — “massively popular trance-inducing jams,” says Gawker — for almost a decade now. While his name may not be familiar, his homemade videos, which begin with his trademark “Hello, Youtubes!” greeting, have been on seen on YouTube many millions of times.

Early fans included Katy Perry and ESPN’s Bill Simmons, who has used a Jenkees piece for his podcast’s theme music. Jenkees’ third album, Days Away, was released last month, and LEO caught up with the human meme to learn more.

LEO: It’s been a few long years since your last album. What have you been up to?

Ronald Jenkees: I took some time to just write new stuff and let that be my focus. On this new album, I really branched out on what sounds I was using. I tried to be more patient with the tracks and let them evolve over the course of weeks, months … I also tried to cram more good stuff on the CD — 15 tracks this time!

LEO: This record reminds me of a lot of great ’80s soundtrack music, from John Carpenter films to Jan Hammer’s “Miami Vice” score. Is that influence in your mind?

RJ: “Speaker 1, Speaker 1” was definitely influenced by that time period. I was worried at first that it would be compared to the “Knight Rider” theme, with that driving arpeggio synth throughout.

LEO: What sort of programs and equipment do you make everything on? Do you do all the mixing and mastering as well?

RJ: I use FL Studio for just about everything. I have an old Korg Triton LE and a Yamaha Motif XS8 that I use for some “live” playing on the tracks, and a USB midi keyboard to control FL Studio. I’m starting to use VSTs a lot more often these days, so the USB keyboard is getting more and more use.

LEO: How has your relationship with YouTube changed, if at all, through the years?

RJ: There’s a bit more pressure to release the “in-your-face” stuff. Each new video generates a lot of work for me in emails and random inquiries. I guess that’s why I took some time away from it, to focus on making music without that pressure and workload, but I’m working my way back into it. It’s always a rush to upload something you know thousands or millions of people might see — 99 percent of people are nice and appreciate new and original stuff. I’m still super thankful for that, it’s amazing.

LEO: Who are some current artists you’d like to produce for?

RJ: I think anyone would love to produce for Jay-Z. He’s just a beast. I think Kid Cudi would be interesting to work with also. His music isn’t very typical.

LEO: Have you done any rapping lately, publicly or otherwise?

RJ: Ha! I haven’t. I did it in the past just to be humorous, and I think it was judged as if I was really trying. I guess that makes it all the more funny.

LEO: Do you wear a hat in the shower or to bed?

RJ: No, but I do plan on getting a speaker put in my shower soon so I can listen to NPR or bluegrass on Pandora. That might be TMI, though.

LEO: What are some other ways you enjoy being goofy or funny?

RJ: I stole this from a friend, but sometimes when I’m at the cash register at the grocery store, I tell them I may or may not be able to pay for all this stuff. It works every time.

RJ: That’s not in the immediate plans, but I’m not ruling it out for way down the road. I understand there is fun to be had there and probably way more money to be made, but I’m afraid it would get addicting and I’d end up spending too much time on the road and away from family. Not to mention, I don’t see how it wouldn’t affect you creating new stuff. I always want new stuff to be on my front burners. It’s more fun for me to create new than it is to play old stuff.