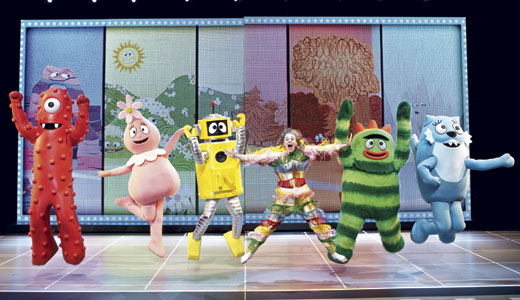 The latest tour starring characters from the popular Nick Jr. TV program “Yo Gabba Gabba!” is called “Get the Sillies Out.” It’s their third tour, and if you’ve seen either of the first two tours, this one promises to bring the most popular elements of both together in addition to some new material.

The first threw everything together, maybe a little too much for young audiences. The second was more storytelling-based. Along the way, the producers learned the kids really wanted to hear their favorite songs. Cannons and bubbles remain, but the kids have had their say.

The 80-minute show has an intermission built in to ensure that the shorter half of the audience won’t grow restless or wear themselves out from smiling and dancing. Show creators Christian Jacobs and Scott Schultz both came from rock band backgrounds and are happily mindful that, for many present, it will be their first concert experience.

The TV show, now in its fourth season, has earned many adult fans, from parents relieved to have a kids’ show that doesn’t insult anyone’s intelligence to music fans who delight in seeing acts like Biz and co-star Mark Mothersbaugh of Devo, and guests ranging from the Shins to the Roots (and comedy fans who appreciate the Pee Wee-level of silliness, with appearances by comic actors like Amy Sedaris, Jack McBrayer and more).

Still, some adults are surprised to learn about such a hip level of love for this show aimed at preschoolers. Schultz says both Lance and Biz were perfect fits for the show, even before it became a reality, because both have kept in touch with their child within and delight in having fun with the little ones. Biz, Schultz notes, did earn his rep back in the day with songs like “Pickin’ Boogers,” so it shouldn’t seem like such a stretch. “He’s great, we’re just excited to have him.”

In addition to showcasing beloved songs like “Party in My Tummy,” another special aspect of the live show is the post-show meet-and-greet backstage, where delighted (though sometimes confused or scared) children can meet the characters, which appear much bigger in person than many children expect. Schultz says that lines often form for each character, revealing who is more popular. “I thought Tootie would be the one who’s the least popular, but she has a lot of fans … Obviously, Brobee and Foofa — Foofa’s probably the most popular.”

Some parents try to get closer — too close — to the charming DJ Lance, which explains why he has a bodyguard nearby for these events. Like many things about “Yo Gabba Gabba!,” this show has plenty for adults to look at, too.

For those wanting more “Yo,” Schultz says a movie is planned, as well as specials in 2013 — one of which will visit, for the first time, Lance’s room. (But not in that way.)