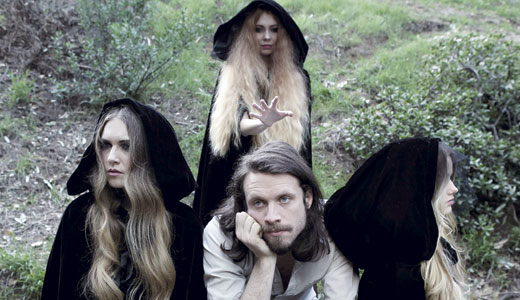 Josh Tillman had a creative breakthrough in 2011. After years of releasing critically acclaimed, low-selling solo albums, he joined a band called Fleet Foxes as they quickly rose from Seattle buzz to international popularity. But it was just a job, and, approaching 30, Tillman knew he had more to give.

Depressed but more financially fit, Tillman quit the band and moved to Los Angeles, where he tried to write a novel. Surrounded by the carefree 21st century hippie musicians of Laurel Canyon, Tillman changed musical directions, letting the sun shine in and dropping his (musical) pants.

So, it must feel weird to jump from obscurity to the drum seat to the center of attention, right?

“I hate to say it, but it really didn’t take much adjustment whatsoever,” Tillman laughs. “I’m a nightmare behind the microphone.”

He says he never saw the “artistic merit” behind the showmanship usually unveiled by those on the big stage, but he’s now old enough to be himself and not worry as much about potentially looking foolish.

Now 31, Tillman says, “I think, like any person in their early 20s, I very much wanted to be taken seriously … The J. Tillman (solo) albums, I stand by them. (But) at this stage in the game, I have to distance myself from them for my own creative purposes. I had to, like, prepare the sacrificial lamb for the slaughter and drink its blood,” he laughs, “in order to move on.”

Citing the search for truth and honesty as his mission, Tillman allows, “Your definition of that changes over time.”

His earlier work isn’t too dissimilar from Father John Misty’s album Fear Fun, which was released by Sub Pop last May, but there’s a lightness and a joy now that he had previously tried to suppress. He knew he had that in him all along, but just like Dorothy in “The Wizard of Oz,” he had to take the long journey to find where it was.

“I had a moment of illumination when I realized, ‘This shit is so hard because you refuse to use the skills that you have.’”

Tillman says he knows he’s not the first, that some people learn that they’ve been too close to their own personalities and taking themselves for granted for years, only discovering later what was always staring back at them. The insight was, for him, simple but life-changing: “The melancholy and introspection is still there, but what I was leaving out was my ability to laugh.”

He doesn’t stop before the punchline anymore. It’s earned him a new group of fans. “Comedians really respond to this music in a way that makes me proud,” he notes. Backstage after a recent performance on “Conan,” fellow guest Sarah Silverman recognized Tillman’s girlfriend from one of the band’s videos.

A similar thread Tillman sees is that comedians have to go a long way with their craft to be taken seriously, like he has. He calls his current approach to songwriting akin to a magic trick, infusing serious songs with enough humor to make it go down easier. “It’s funny in some respects, but it’s got some dignity.”

He agrees that such an approach is not trendy now, and probably never has been, but people always like it when they hear it. “I think a lot of music at this point is just made under the premise of, ‘Just don’t fuck up!’ (My music) is like navigating a landmine of potential uncool choices.”

When he first arrived in L.A., he went to some comedy open-mics “as a voyeur” but quickly learned he was not built to be a traditional stand-up. He likes his humor best “when it’s totally inappropriate. In that respect, I’m really in the perfect position.”

“In some ways, I fit the bill for ‘white, male, acoustic guitar-playing singer-songwriter’ archetype. A lot of the shit I say on stage is wildly inappropriate, given that archetype. In that way, it’s more enjoyable for me.”