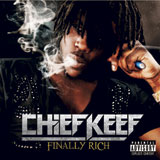 Keith Cozart is a master of satire. The teenager has captured an eager public and media, none of whom seem in on the joke. The Chicago man-child, famous for the Kanye co-opted single “I Don’t Like” and his legal troubles during his city’s deadly summer, released this retail debut that only rarely escapes the smirking insincerity of adolescence. The hackneyed lyrics (I’m cooler than a cooler) are surrounded by expensive production that admittedly sounds phenomenal in the car, so long as none of the words penetrate. His label can’t decide whether to market him as the ultimate survivor story or the clichéd “urban” bogeyman, even when they seemed hesitant to finally release his record. I need to believe in the satire, his comedic genius; to think otherwise is to abandon hope in the human experiment.