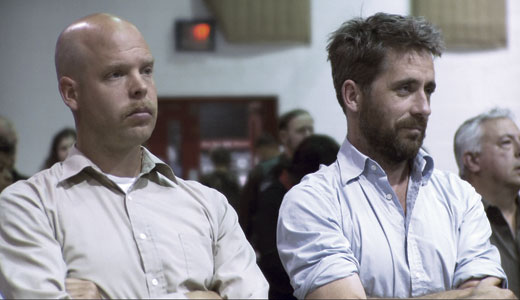 At first glance, Will Oldham is unrecognizable in “New Jerusalem,” a film that is itself a departure from the previous work of its makers. Those who caught “The Comedy” at the Flyover Fest last year may have similar trouble identifying this latest from director Rick Alverson and co-writer/actor Colm O’Leary. Their new offering is sincere and quietly profound where their previous study of an aging, Williamsburg ne’er-do-well uses cynicism, judgment and irony as its chief commodities.

Bald as the used tires he sells and sheared of hipster facial hair, Oldham appears unveiled in “New Jerusalem,” a what-you-see-is-what you-get effect that ripples into the character he plays. Ike is an evangelical Christian who uses religion in an attempt to reach a troubled co-worker, Sean (played convincingly by screenwriter O’Leary).

With a worn-in Bible institute cap balanced atop his dome, Ike could have been played as a tongue-in-cheek caricature. But, refreshingly, Oldham delivers him straight-faced. He asks his “weepy” Irish counterpart seemingly dopey questions about the IRA and Walt Whitman. These disarm Sean, resulting in probing reveals from the chronically vexed National Guard member.

Despite his 1,000-yard pout, we learn that Sean liked pumping gas for the convoy in Kandahar. So, what is troubling him, if not the war? And, what’s Ike’s true objective here: friendship or religious conversion? “It’s important to me that you are right,” Ike says, and the sermons he shares with Sean probably come from a good-natured place rather than proselytization. But this is just one of the not entirely resolved questions the filmmakers use to gently prod their audience into thought.

“New Jerusalem” may not be the film for viewers in search of spelled-out emotional cues, a rapidly advancing plot or glossy, big budget technique. What is offered are symbols to mull over. Why are Ike and Sean used tire salesmen, for instance, and what does the title connote exactly?

There is also an intense overarching longing that doesn’t always feel good. This sense is only briefly relieved during its characters’ touching exchanges — memorable, surprisingly simple moments, three of which come to mind specifically.

During a coffee break at a donut shop, Ike takes Sean’s hand in his after struggling to get through to him. The gesture is many things at once: interminable, awkward and powerful. What’s more, viewers are given the space to interpret the meaning of this contact for themselves. It’s an approach that’s repeated when Ike makes a 90-minute recording of himself reading scripture for Sean, as well as in a scene where he, Jesus-style, washes the struggling man’s feet. There’s no punch line and, really, no point-of-view to these scenes. We are left to imagine for ourselves what Ike’s intent is and what Sean is thinking in these moments.