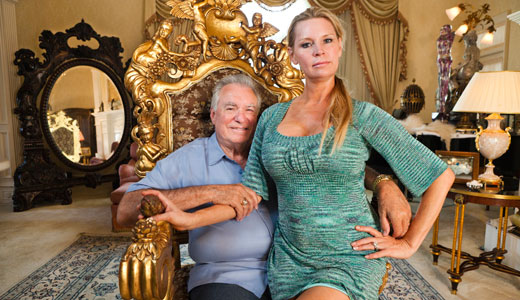 The Queen of Versailles

This year featured releases from seemingly every big-name director in the business. Directors who have already won Oscars made all five of the recent Golden Globe nominations for Best Picture. If you have not seen “Lincoln,” “Django Unchained,” “Argo,” “Life of Pi” or “Zero Dark Thirty,” surely they deserve to be on your short list for what to see next.

But you probably already know that. So, what then is the point of a year-end, best-of list? Instead, we’ve compiled a collection of favorite docs and narrative features you may have missed this year. What’s better — as you get those new, holiday devices unwrapped and wi-fi enabled — is the fact that each of these 12 from 2012 are available on Netflix, iTunes, Vudu or other movie-streaming services.

Note: Though some were completed before 2012, each title listed here was released in the U.S. this past year.

THE AMBASSADOR — Imagine if Sacha Baron-Cohen was a “60 Minutes” correspondent and you’ll have an idea about documentarian/performer Mads Brugger. In his latest, the winking Dane bribes, forges and lies his way into a Liberian ambassadorship, all to demonstrate how “easy” it is to then smuggle diamonds out of the country. Somehow, Brugger is still free to walk the streets of Copenhagen.

THE IMPOSTER — Like “The Ambassador,” this beautifully made doc features a fish that hurls himself out of water, flopping recklessly into unfamiliar territory. In this case, a 23-year-old man from Spain transforms himself into a Texas teenager who has been missing for years. After arriving in the States, the awaiting family accepts him as their absent son.

BERNIE — He’s always good as the crooning clown, but Jack Black hits a high note in yet another quietly excellent Richard Linklater film. From his mincing gait to his scrubbed-clean facade, Black is terrific as a closeted homosexual assistant funeral director in conservative, small-town Texas. Nominated for a Golden Globe, Black’s game may have been raised playing opposite Shirley MacLaine, who is just right as an acerbic widow and Bernie’s unlikely lady friend.

KLOWN — In this wildly inappropriate comedy from Denmark, a man trying to prove he is fatherhood material invites his girlfriend’s young son on a “Tour de Pussy.” That is, a river vacation with his adult friends. Following several mishaps and what is likely the first canoe chase in cinematic history, Frank gets a better grip on what it is to be a parent, and Bo learns how to pee standing up.

JIRO DREAMS OF SUSHI — The world’s best “shokunin” works out of a 10-seat sushi stand in a Tokyo subway station. At the center of “Jiro” is an 85-year-old chef’s elusive pursuit of culinary perfection, while the oceans that supply his raw material are rapidly depleting.

BEAUTY IS EMBARRASSING — The curtain has long since fallen on the adage “there are no second acts in American life.” Case in point: Wayne White, the successful “word painter,” animator and puppeteer who once upon a time played a key part in building “Pee Wee’s Playhouse.” White’s life story may not inspire you to go out and make art, but it will likely make you want to express yourself.

MOONRISE KINGDOM — Wes Anderson’s fixation on style can come at the expense of storytelling, yielding some gorgeous disappointments. Fortunately, “Moonrise Kingdom” is not among them, despite obsessively detailed art direction. Anderson’s best stuff (“Rushmore,” “The Fantastic Mr. Fox”) tends to dwell in the realm of young adulthood, and “Moonrise” fits very neatly into this file.

BEASTS OF THE SOUTHERN WILD — From a starkly different universe than that found in “Moonrise Kingdom,” there are qualities that these two films share. Both titles play like children’s literature brought to life through their use of fantastical journeys, awe-inspiring production design, and impressive, pint-sized protagonists who are joys to watch.

THE QUEEN OF VERSAILLES — Imagine 26,000 square feet not being enough house. “Versailles” is the story about a 90,000-square-foot upgrade, extreme wealth, and the food chain that is our real estate and credit markets. The gaudiness and greediness may turn you off to the pursuit of vast riches. The volatility of high finance reflected in this film should make you feel well-off right where you are.

HEADHUNTERS — A diminutive art thief (Aksel Hennie) engages in a thrilling game of cat-and-mouse with a deadly GPS expert and former terrorist hunter. This adaptation of Norwegian crime writer Jo Nesbo’s bestseller is rife with fun twists and turns and comically shocking moments.

WE NEED TO TALK ABOUT KEVIN — Not a feel-good film, Lynne Ramsay’s dizzily shot feature is mesmerizing. We are dropped into the worst moments of a mother’s life, guided only by hallucinatory camera work that seems to blur focus whenever we’ve learned just enough about the fractured Eva (Tilda Swinton) and her dangerous son. The sutured together, non-linear narrative keeps viewers unsettled, and in this way, the film gives us an impressionistic view into Eva’s inability to unravel the enigma of a son who chooses to reject her and his abominable crime.

MONSIEUR LAZHAR — In what might make a nice palate cleanser after viewing “Kevin,” an asylum-seeking substitute with a mysterious past (Mohamed Fellag) takes over a grade school class that is grieving the loss of their teacher. Both sides receive tender lessons in coping with sorrow in this lovely French-Canadian gem.