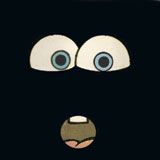 I find it hard to believe any of the press for Boston band Skimask. Touted as a duo of microphone and electronics users accompanied by a “self-aware” drum machine, the group create music that sounds like an a cappella and eminently danceable Karp, as fronted by a particularly snarky David Yow. The fact that you just read that sentence should tell you exactly why their claims are unbelievable: How can you make music this quixotic with two microphones and a drum machine? Appropriately titled, Skimask’s debut defies any conventional explanation, opting instead to shroud their identity in mystery, letting the music speak for itself. That their self-classification of “Black Sabbath in reverse” makes perfect sense is a testament to the band’s fuzzed-out “bass” and drum onslaught, which if nothing else remains consistent, if challenging, throughout the course of the album.