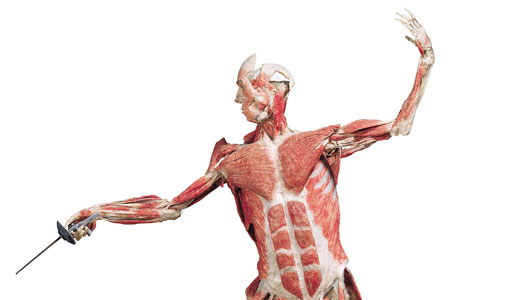 It’s time to take a hard look at yourself. I’m not talking about journaling your hopes and fears or scheduling an appointment with your therapist — I’m talking about the physical you. Your cells, blood, organs, muscles, bones and eyeballs. Those of us not in the medical field don’t really think about what is going on inside our bodies until something goes wrong. The Kentucky Science Center’s new exhibit, “Body Worlds Vital,” gives you an up-close and personal look at our bodies by using actual human specimens.

Created by German doctor and scientist Gunther von Hagens in 1977, the pieces in the exhibit are preserved through a process called plastination, which stops decomposition and preserves body parts for scientific and medical education. There are several “Body Worlds” exhibits touring the world, and this particular one — “Vital” — focuses on the inner workings of the human body and shows the effects of poor health, good health and lifestyle choices. Display cases show a healthy, pinkish-white lung next to a smoker’s lung, which is black and shrunken. A large, budding liver sits next to a shriveled liver that suffered from cirrhosis. (Did you know your liver weighs 3 pounds and is the largest organ in the body?)

The temporary exhibit is located in a separate space from the rest of the Science Center displays and also includes many full-body specimens, sliced in different ways to reveal where organs sit, or nerves travel, or how muscles support the skeleton. Viewers get to see the effect of various diseases on the body, which was sometimes hard to digest, especially for the squeamish. A wrist was cut open to show the effects of carpal tunnel syndrome, and a brain with Alzheimer’s disease was on display next to a normal one, revealing many gaps and fewer neural passageways than the healthy brain.

These types of exhibits have been criticized for questions surrounding body donors — including the “Bodies Human” exhibit that was here in March 2009 at the Mellwood Arts Center — but the intro to “Body Worlds” stresses that each specimen came from certified donors who gave consent for their bodies to be used in the exhibition. No personal information about the donors or how they died is included.

“Body Worlds Vital” is also presented by Spalding University, the Louisville Metro Department of Public Health and Wellness, and the YMCA of Greater Louisville, and there will be educational events surrounding the run of the exhibit. “We think this is the health event of the year,” says LaQuandra Nesbitt, director of the Department of Public Health and Wellness. “We are very excited to partner with the Kentucky Science Center.”

Much like the four teenage protagonists in the film “Stand By Me,” I think many will flock to the exhibit for one reason: to see a dead body. But hopefully from this curiosity there will be a better understanding of what goes on inside, and how to avoid, say, a black lung. I admit I felt a little ill throughout the exhibit and couldn’t quite shake it off long after my day ended. It can be a little intense seeing diseased organs and full-body specimens.