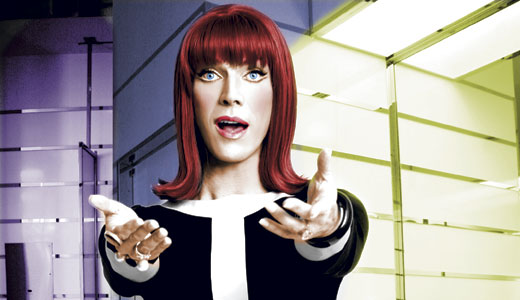 Miss Coco Peru began her entertainment career more than 20 years ago and has appeared on stages across the country as well as on TV and in the movies. She’s performing here Saturday at MAP Louisville, a benefit for the Louisville Youth Group that involves an hour of stand-up by Coco and a watching party for the “Miss America Pageant.”

LEO: You’re coming here to do a benefit for the Louisville Youth Group, an organization that helps gay teens. Do you have any advice for teens who are coming out?
CP: My whole coming out experience was in my 20s, so it’s refreshing that so many people are coming out in their teens nowadays. It can still be a difficult experience. What I did was read books about coming out, and I made sure I had a base of support that I could fall back on as far as friends.

LEO:What are your thoughts on President Obama — is he doing enough?
CP: I guess there’s always more work, but again, having done Coco over 20 years now, it’s just amazing how far we’ve come. When the president came out for gay marriage, it was very moving for me because when I started doing Coco, my goal was to talk about these issues as Coco — as a man who presents himself to the world in female clothing. I don’t pretend to be a woman on stage. I acknowledge that I’m a gay man, and I tell autobiographical stories. Part of my vision for Coco was I wanted people to listen to my story and forget that they were watching a man in a dress.

My only fear sometimes with the gay movement is that I don’t want to assimilate. I don’t want to feel like I have to be like them in order to be accepted. I want to still be a freak, you know? It’s that fine line, I guess.

LEO: Who are some of your inspirations?
CP: Early on, my inspiration was Bea Arthur. I had the honor of becoming friends with her. Early on, as far as drag, I would say Charles Pierce and then Charles Busch, who is a New York performer. He was playing female lead characters in plays he wrote, and they were taken very seriously. I couldn’t believe what I was seeing back then — someone was in drag but had somehow crossed over. That inspired me — that I could do theater but still do it in drag.

LEO: What came first — the comedy or the drag?
CP: I had trained to be an actor, and I always had a sense of comic timing, I was told. And then the drag came later. I grew up in the Bronx around a lot of funny people. I loved being around adults as a kid. I was born late in my parents’ life, so I was always surrounded by these wacky adults.

LEO: Tell me about the first time you experimented with drag.
CP: The first time was a goof at my sister’s house. I just threw on a wig and a dress she had there and lip-synched “Respect” by Aretha Franklin. It was at the time when you could buy a video camera that was literally the size of a small child. I remember watching it back, and everyone in my family had this moment of, “That’s really good. You look great!”

And then when I saw the Charles Busch show, my boyfriend turned to me at the time and said, “You could do this.” I remember sitting there in the theater thinking I want to do what he is doing. But I had this deep sense of shame. I had been trained as an actor to “butch up.” But with the AIDS crisis going on and with my own evolution, I just decided to really embrace what I was taught to hate about myself. That was part of my activism at the time.

LEO: What’s the best thing about being a drag queen?
CP: Oh, when I’m mistaken for a prostitute. (Laughs) Even today, all these years later — I’m a cougar now!

LEO: The worst?
CP: Just that my feet hurt. And I wear sensible heels! As Coco, I have to be careful in heels. Nowadays, all these heels! I don’t know who designs these shoes — they’re beautiful, but they’re crazy!

LEO: That’s the perk of being a lesbian — no more high heels!
CP: You’re a smart lady! (Laughs) Yes, you embraced your stereotype, as did I! That’s the other thing, too. I embrace stereotypes — I think there’s something to be celebrated there. When you think about it, the stereotypes were the ones to be in the forefront and push forward. I couldn’t hide the fact that I was gay, even when I was young. I figured why not just push it to the extreme and celebrate it?

That’s why I love my lesbians who dress in drag. I think it’s incredibly sexy! I love the whole gender-bending world. I don’t think things should be black and white. I hope that as the gay community evolves and does become more accepted, we don’t lose that edge. I think that’s where a lot of our comedy comes from. I think it’s what makes us special.