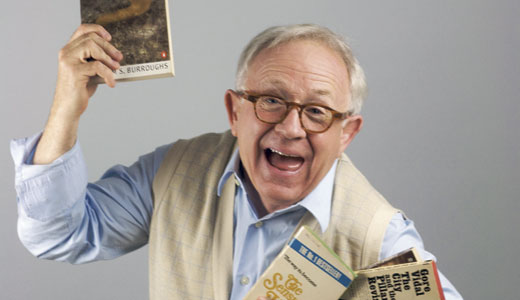 Get ready for a night of hysterical craziness: Leslie Jordan and Varla Jean Merman are taking the stage at the Bomhard Theater to present “an evening of song and slander.”

The night starts off with “chantoozie” Varla Jean, the wild alter ego of comedian and drag queen Jeffery Roberson. The lovechild of the one-month-long marriage of Ethel Merman and Ernest Borgnine, Varla Jean is all curves and smiles, with a flair for the operatic in her music, on the runway and on stage. Her tongue-in-cheek humor pokes fun at everything from Hollywood to gay pride through a medley of limerick and song.

Offstage, Roberson’s credentials are formidable; you might have seen him as dramatic news reporter Mary Sunshine in the Broadway revival of “Chicago.” Or, you might remember him from a particular episode of “Project Runway” aimed at drag fashion.

Small in stature but larger than life, Jordan’s comedy takes a bit of a different approach. His set centers more on the stand-up variety; when he’s not performing around the country with Varla Jean, he’s had a long history of successful one-man shows. A native of Chattanooga and a former jockey, he’s no stranger to Louisville and racing culture. He has a certain affection for the River City (and its premier drag spot, The Connection).

After a high-profile run on “Will and Grace” as Karen’s rival Beverley Leslie, which brought him an Emmy, he’s been seen on numerous TV shows like “Ugly Betty” and “Desperate Housewives,” not to mention a role in the 2011 movie “The Help.” Jordan says his comedy centers around snippets of his own life. His work has a lot to say about growing up gay in the South and experiences traveling on the humor circuit.

Roberson and Jordan met two years ago on the set of the off-Broadway production “Lucky Guy,” and they decided to pool their talents and take a dual act on the road. It’s an evening with two seasoned comedic performers, one playing a role full of beauty, flair and pizzazz, the other enjoying and recounting a lifetime of wacky anecdotes that will leave viewers inspired and tickled.

Both Jordan and Roberson say their work serves the greater purpose of celebrating and empowering gay pride and awareness. During his time offstage, Roberson has helped make an educational film about the Stonewall Riots and says his work has helped raise awareness about acceptance. But, he says, things have changed since he started his comedic career. “I think so many more people feel free to be gay, and it’s not even an issue for a lot of people,” he says. “I think people are realizing that it’s one life, and you should live it the way you want, because it’s not that long.”

Jordan looks back on his role on “Will and Grace” and acknowledges that the sitcom was a pivotal part of gay acceptance in the United States. “It was the first sitcom that we as gay people could own … and yet mainstream America was accepting of it.” But in the end, he just hopes to give audience members a night of laughs. “It’s a little more than gay comics out there telling jokes. It’s ‘an evening with’ us.”