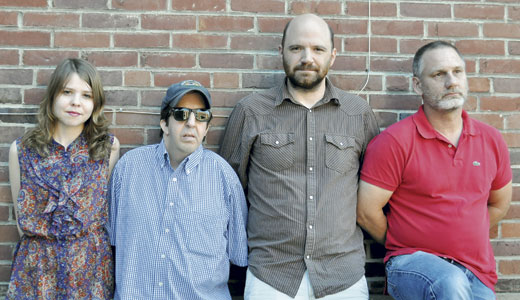 We survived another presidential election, a debilitating East Coast hurricane, and the weakest apocalypse in the history of weak apocalypses. We have come out on the other end, in a new year, and we all know what that means: It’s time for another “Improvapalooza.”

This is No. 13 for the Louisville Improvisors, and this time they’re bringing The Black Version, an all African-American sketch comedy troupe hailing from the legendary L.A.-based theater The Groundlings, featuring Jordan Black (“Community”), Daniele Gaither (“Mad TV”) and Cedric Yarbrough (“Reno 911”).

Louisville Improvisor Chris Anger took some time to talk about the show and the art of live improv.

LEO: What can audiences expect this year?
Chris Anger: This is the biggest show we’ve ever done. We’re moving to the Bomhard Theater, which is a home this show deserves. (The Louisville Improvisors) will be doing a lot of short-form stuff that incorporates the audience a lot more. The Black Version is more long form; they’ll take a suggestion of a movie that’s already been made from the audience, and then they perform “the black version” of that film live on stage. So, yeah, we’re going for it.

LEO: Moving up to the Bomhard, that’s big.
CA: Yeah, I think that’s huge! We’ve been at The MeX, and we’d usually sell it out every year. So, after last year, we thought, “Let’s go big or go home and move to the bigger room.” Because every year I hear from people, “I wanted to go to the show but couldn’t get tickets.” This year, we want everybody who wants to to be able to come. And we did a show there a couple of years ago and it’s a great space, so we’re all really fired up about it.

LEO: As far as rehearsal goes, do you rehearse differently for “Improvapalooza” than you do for other shows during the year?
CA: Not really. Our rehearsals are always the same pretty much. Rehearsal for us is just getting to know each other so that when we get on stage, we don’t have to think about anything but doing what we do. It’s all about building chemistry and trust.

LEO: I hear “trust” a lot when it comes to live performers of all kinds. Why is trust so important?
CA: Some people, when it comes to improv, get nervous when something doesn’t work and start to shut down because they think it’s entirely incumbent on them to make the audience laugh. But when I have trust in the people around me on stage, I feel more free to try anything, because if it doesn’t work, I trust that those guys will pick it up and make it funny.

LEO: I’ve always heard the No. 1 rule in improvisation is “Yes, and …” Is that still true?
CA: You know what? Even when cavemen improvised, the first rule of improv was “Yes, and …” Absolutely. It’s still true. If you say “no” or “I don’t like that idea,” then you have nowhere to go, man. That way, you build on the idea without worrying where you’re going. And as simple and fundamental as the idea of “Yes, and …” seems, it’s the difference between good improv and bad improv.