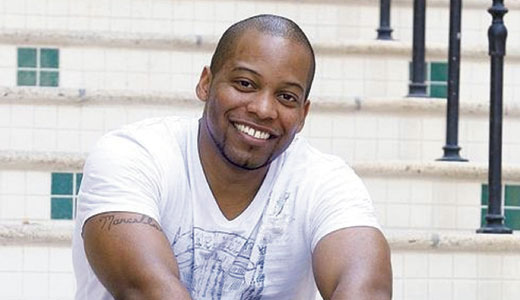 A Miami seventh-grade teacher by day, Al Jackson launched his comedy career at night, showing up at any open-mic that would take him. His secret didn’t last long. “After a while, the kids would be, like, ‘My mommy and daddy said they saw you at the comedy club this weekend.’”

Jackson has since been featured on “Last Comic Standing,” “John Oliver’s New York Stand-Up Show,” “Live at Gotham,” and in 2011, he got his own Comedy Central half-hour special. He was also chosen to be the comedy mentor on MTV’s “Made.” He’s headlining this weekend at Comedy Caravan.

LEO: I know you’ve spent a lot of time in Louisville before. Where do you like to hit up?
Al Jackson: I love to go to barbecue places. And I love to go places to catch live music. There’s also a place around the corner from Fourth Street Live that I like a lot— Third Street Dive. I go to Louisville to listen to my music, drink a little of my bourbon, and watch some college basketball. I spent a lot of time in Louisville. When we did MTV’s “Made,” the kid was from Southern Indiana — so I basically spent a whole summer in and around Louisville.

LEO:So you had fun here?
AJ: Oh God, I love it! It’s a fun town — there’s so much history, the people literally stay out all night just to drink. I have a great time, and we’re gonna keep it going when I get there.

LEO: I hear a lot of complaints about our 4 a.m. last calls …
AJ: Yeah, you all are called “alcoholics.” It’s time to take your ass home at 4 o’clock. Even if you’re going to keep partying, you don’t need to be out at an establishment. Whenever you see people starting their paper routes, it’s time for you to go home.

LEO:Do you remember the first joke you ever wrote?
AJ: It was probably about the Miami Dolphins or something, because they were really bad at that time. I do remember the first joke where I knew it would work every time, no matter where I went. Because I used to read this essay that one of the kids in my class wrote, and he just didn’t understand really what marijuana was. It wasn’t making fun of him, it was really more of the cute and naïve nature that you are at in sixth and seventh grade. I would read that and it would bring people such joy.

LEO:Why is it that Carlin and Pryor seem to be such universal influences on comedians?
AJ: Carlin because of the writing, and Pryor because of the honesty. Pryor’s jokes were jokes that only Pryor could tell, because they were so personal, so close to him. And somehow comedy has gotten away from that kind of honesty and started moving to more observational stuff; like: “Did you ever notice how much toilet paper your girl uses?” Or, “Who remembers Monopoly?” I guess it’s easier to stand in front of strangers and let them judge you when you’re talking about things that aren’t as personal to you and threatening to them.