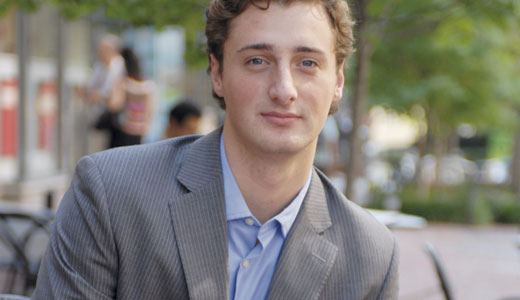 For most soon-to-be college graduates, the road often traveled involves either a summer backpacking through a foreign country or worrying about how to pay off their Titanic-sized student loan debt. For Atlantic contributor Brian Michael Till, the road less traveled involved an audience with the world’s most powerful leaders in an effort to cut through the morass of modern journalistic interviews and find out what happens when ex-presidents let their hair down. Till will be in Louisville Tuesday to talk about his new book, “Conversations with Power.”

LEO: How did “Conversations with Power” come about?
Brian Michael Till: The idea really came during the 2008 campaign. I should have graduated in ’07, but I took a year off and sort of traveled and interned in the Senate, but also started freelancing stuff about the campaign in Iowa and New Hampshire. You get this sense that you can’t be honest if you want to get elected. You sort of speak in broad strokes and talking points. You don’t level about how hard it is or how big this job is. From there, I began thinking about, “How do I do something that lets me speak candidly about this stuff but that isn’t just some 23- or 24-year-old pontificating?”

LEO: How does a recent college graduate get an audience with Bill Clinton?
BMT: A 23-year-old kid is not the most threatening interview. It changes the dynamic from the start. A lot of times they’ve done so many interviews that they expect a certain thing, they expect someone to pin them down on one or two things that are going to make a headline, and at no point in this book will you see me trying to do that. It’s about having a bigger conversation, and I think that is also disarming for them.

(Former Czech Republic president) Václav Havel, after his presidency, wrote this incredible play, “Parody of the Journalists.” These guys come in and they’re like, “I interviewed you two years ago, do you remember me?” It was spot on in so many ways.

LEO: The idea behind that play is interesting. Do you find that journalists run into one another in that there are tropes that exist from one interview to the next?
BMT: I watched David Gregory and the president on “Meet the Press” last week and it was almost a parody. People are always fishing for a headline. The first time I saw that was when I was an intern in the Senate and (Sen. Patrick Leahy, D-Vt.) had just taken back the chair of the Judiciary Committee and was doing some talk at Georgetown Law School, and some guy swoops in and says, “Are you going to take away secret holds on nominations?” But Leahy just laughs and says, “This guy’s looking for a headline.” I thought it was a great question, but in that moment, it sort of solidified in my head — I started to understand the relationship (between journalists) and the tropes they play.

LEO: When you started this process, did you envision a book?
BMT: It was always about a book. Is it alarmist, the press you read about climate change and other trends I saw around the world? Were these stories just about giving into human fears, or were they founded? After talking with enough people in military defense and intelligence, I discerned that climate change is absolutely real — it’s manifest across the world, it’s a national security issue. Once I felt grounded in my thoughts about the world, the question was, “How do I aggregate this information in such a way that it resonates a little more than me just writing blog posts?”

LEO: As easygoing and disarming as those conversations were, were there any moments in which things got heated?
BMT: There were things that were heavy, for sure. Gro Brundtland — a politician from Norway, an incredible woman whose work gave birth to the Kyoto Protocol and the idea of the “Girl Effect” — she was also target No. 1 for Anders Brevik, who killed all those kids in Norway a couple of years ago. She was talking about her son committing suicide while she was prime minister, and the fact that she couldn’t tell any of her kids to go into politics because of what it’s become and what it means for someone’s family. There were a lot of heavy moments like that.

LEO: Aside from the humility that you seem to have drawn out from leaders, what was the most surprising thing you discovered?
BMT: I think the combination of their sense of how dire the things we’re facing are — be it overpopulation or resource scarcity or climate change or tensions between different cultures around the world — despite recognizing all of that … in a way that very few people do, they’re all really optimistic. They can at once see that and understand that, but have really positive thoughts about our capacity to overcome all of that. That really blew me away.

LEO: Doesn’t that seem at odds with the kind of apathy that Generations X and Y seem to be labeled with?
BMT: I think that we (as Americans) live in an amazingly comfortable position, and for a little while longer, I think that’s going to stick around. But the world will get increasingly destabilized, and as that happens, we’re going to have to look really hard in the mirror and figure out how we feel about our common humanity as well as a lot of the things we’ve managed to push aside and not really look at.

LEO: So, who had the best handshake?
BMT: That is a fantastic question. You know, Clinton does something that’s very interesting. You’ve got this standard American male firm handshake, right? Clinton is the opposite. He’s got these huge soft hands that he just lays on yours. It’s the most gentle handshake. That was the only one that was truly memorable.