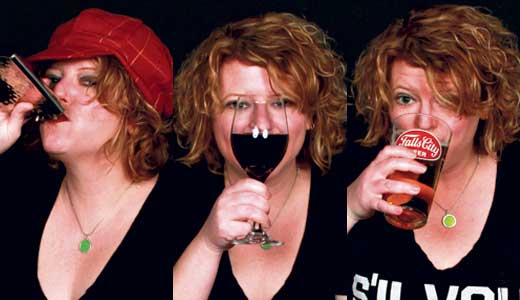 The other night my friend and I, both in our 30s, snuck out of a party thrown by a 25-year-old. It was nearly 2:30 a.m., but the shame that came as we darted for the door, heads down, hoodies up, was more than I can bare. The DJ outlasted us. The couple making out in the bathroom outlasted us. The PBR was still aplenty and the Old Fo sat steady at its halfway mark. What has happened to me? I used to be the last one to throw in the toga towel, and now I’m creeping out like a Kardashian in Payless. In my defense, I was hungover, but that really hasn’t ever stopped me for the last 15 years.

Have I lost my edge? Do I need to step down as the Bar Belle? Do I need to invest in a motorized scooter for my next pub crawl? The answer to all three of those questions is a resounding no, but I am getting older, and I must acknowledge that there are people who can legally drink who do not know what a Zima is, let alone a Debbie Gibson or an Alf. Here are some indisputable signs that you’re reaching an age you thought was sooo old when you were 12.

In the style of Jeff Foxworthy (kids, that’s a redneck comedian) — You might be old if …

• You’ve said “rotator cuff” in a sentence in the last 24 hours.

• You can’t go out drinking two nights in a row.

• Your hangover is equally as bad as your eyesight.

• You now take antacids instead of No Doze.

• You haven’t experienced last call at the Back Door yet this year.

• You still have a boner for Aerosmith and Coldplay.

• You’ve only been to Headliners once this year and that was for the Fleetwood Mac tribute band.

• You no longer pre-drink before going out.

• Your one dance is The Robot and you still wake up sore the next morning.

• You order salad instead of nachos.

• Your day is made if you get carded or hit on by a 20-something.

• The barista calls you ma’am.

• The barista rolls her eyes because you’ve just ordered decaf.

• You show up early to the bar to make sure you have a seat.

• You haven’t stolen a shot glass in more than six years.

• Your beer coozie collection is quite impressive.

Bar of the Week
Beer and barbecue make a cute couple. They never bicker, are secure in their independence and always throw the best parties. I ran into them a few weeks ago at the Hilltop Tavern (1800 Frankfort Ave.), and they showed me a great time. I still have bruises. Hilltop specializes in barbecue and craft beer, and their balls-out spicy chili will leave you breathless and asking for Tums. The menu also includes standard pub grub like burgers and wings, but it’s the smoked ’cue and its accoutrements that had me swooning — namely the green beans (yes, I eat green things on occasion). With foosball and ping pong in the dining room and a pint of PBR and a shot of Old Crow bourbon at the bar for $5, I was in Hilltop bliss.

On the radio, whoa ohh …
This face was made for radio. Tonight (Jan. 30) I’m going to join fellow LEO writer and Taste Bud Kevin Gibson on his weekly radio show on Crescent Hill Radio. Every Wednesday at 8:30 p.m., he and his buddy Butch Bays (both of the Uncommon Houseflies) host “Flies on the Wall,” a show about local music, offbeat news, interviews and fart jokes. I’m gonna get good and liquored up before, so whoever is in charge of the censor button should be nervous. Listen in at CrescentHillRadio.com.

Drunk Texts of the Week
• This sounds like loverboy drunk in a basement
• Im not even hearing words right now, Im hearing letters
• A squirt in the face is worth two in the bush
• Fire in the hole!