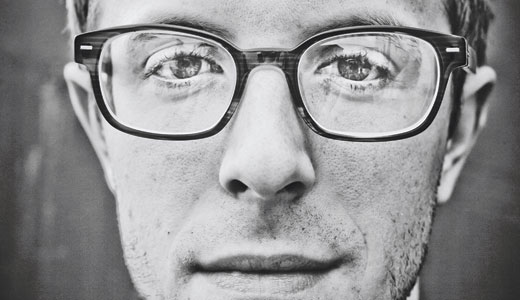 Troubadour Justin Paul Lewis has been working hard for several years now, honing his craft one gig at a time. His latest performance will be at Uncle Slayton’s on Thursday.

For his newest collection, a four-song EP, Lewis teamed with Ben Sollee to take his ideas to a different level.

LEO: Who is Ben Sollee?

Justin Paul Lewis: The producer of my new album Rinse, Repeat, Rewind, a cello-playing madman, a father, and a very dear friend.

JL: Day-to-day life really got in the way of getting these songs out sooner. Ben and I were on the road together for a bit, then Ben was out solo, then the home and family called for me to take care of some things. So we took our time. We recorded bits and pieces of each song from then until now, letting them bake for a while. Each time we would go back, we would realize that our ears had matured to each song, and new ideas would just plow into them. I really made a lot of strides as a performer during that time, too. I often think back about what the record would sound like if we recorded it today.

LEO: How would you guess your 2013 will look one year from today?

JL: At this point, there are handfuls of possibilities. There is no doubt 2013 is going to be a busy one. I have had a lot of great “music folks” reach out about the song “Salt” and the new record — it’s been very encouraging to keep trucking on and keep writing. I will definitely be doing some touring and some well-needed sitting. I think I may start a basketball league, too. Any takers?

LEO: Where is the hardest place to fall?

JL: The Back Door is more of a stumbling place, so I would say that damn skate park.

JL: I would invite them to Vietnam Kitchen to talk it over. Kimmet can sit next to me.