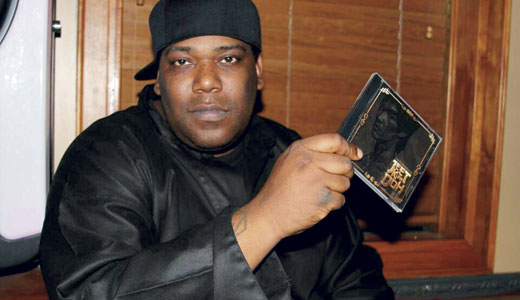 “I was always a chubby dude, so when ‘Boyz N the Hood’ came out, my brother and cousins called me Doughboy. A few years later, I was living a little less-than-legal lifestyle and I was greedy. My brother said, ‘You prefer dollars over hoes any day.’ I (wanted) to keep my nickname as my stage name, and it aligned perfectly. No one has called me by my real name since I was 12.”

Jeet Kune D.O.H. finds the Grimey Rhyme emcee and producer at his most self-contained and most confident. The 31-year-old looked to the East for direction this time around, embracing Bruce Lee’s philosophy in what started as conceit but turned into total immersion. “I was enjoying an adult beverage watching TV one night, and I didn’t know what I was going to do for my third album,” he says. “The ‘I Am Bruce Lee’ documentary came on, and the first thing said was ‘Jeet Kune Do.’”

The similarity was impossible to ignore, and D.O.H. began using clips of Lee as the album’s sonic foundation and inspiration. He read Lee’s “Tao of Jeet Kune Do” in an effort “to fully understand the responsibility of using such an iconic figure as my influence.”

D.O.H.’s work ethic and drive has long served as an inspiration to his crew. “I’ve known Nacirema since I was 15 years old,” he says of the Scanners emcee. “When we got together, we just knew we had the right chemistry for a new movement, and Grimey Rhyme was born. It was his brainchild but me, Nacirema, Gonzo and Polio, that was the beginning.”

“I wanted ‘Be Water’ to be last on the album,” he says, to serve as a summation of his embrace of Jeet Kune Do’s tenets. “The function of intercepting everything before it touches you, to change the outcome by being ready for everything. Music is like Martial Arts fluid movement, quick-striking offense, defense, discipline and courage to use your mind and body to become a whole person and the wisdom that comes with it. I credit this album as me growing up in life as well as musically.”