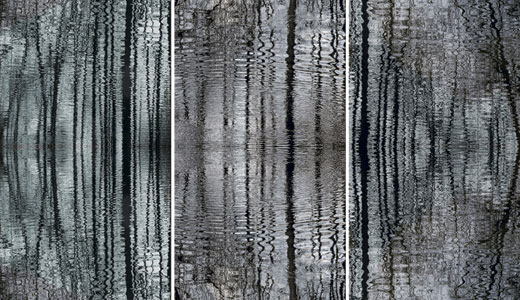 The idea for “Complementary,” now on exhibit at the Green Building Gallery, was a frank chat curator Daniel Pfalzgraf had with Cheryl Chapman, painter and longtime partner to photographer Julius Friedman. Chapman’s lucid assessment of her creative relationship with Friedman inspired Pfalzgraf to look around at other couples in our community whose creativity worked in tandem. The show, which features the self-selected work of five working artist couples, is on view now until Feb. 15.

Chapman and Friedman’s contribution — Friedman’s “Streams of Consciousness” triptych flanked by Chapman’s two abstract paintings, “Warble” and “Relic” — are a perfect example of unconscious aesthetic influence. Though they may be differentiated by medium, the works echo each other compositionally. Chapman told Pfalzgraf that she did not notice the way they rhymed until she saw them side by side in the gallery; displayed in this manner, the connection is clear and undeniable.

Other artist couples set out to present a more intentional conjoined aesthetic. Hallie Jones and Aron Conaway’s collective effort “Untitled” upstages their individual contributions in both fierceness and eloquence. The diminutive wooden box with legs is set up like a comment card station — equipped with comment card and pens, and a brief sign inviting feedback — yet when the comments are inserted into the wooden slot, they are shredded and pile up on the floor beneath. This metaphorical flip off the world’s commentary is both poignant and enviable and offers the viewer the opportunity to feel that rarest of emotions in the art gallery: laughter. Even though the year is only a month old, this piece is my favorite of 2013 so far.

Russel Hulsey’s “Screw Piece 1 (Screw Me, Screw You)” are literal spellings of the words “you” and “me” in screws inserted in the wall, playing in Hulsey’s signature puckish style on the insidious nature of the words we speak to our beloveds. Shelley Vaughn Hulsey’s “Paper Tiger” video installation, with its tingly, atmospheric soundtrack and abstract shapes, reminded me both of looking at the sun and the dazzling euphoria of romantic love.

Michael and Mickie Winters chose a set of complementary photo-based works. Mickie’s photo-transfers of insects on wood pair well with Michael’s photographs of the forest floor. A study in macro and micro, you can see how her play on the bugs’ orientation echoes the tilt of Michael’s camera.

Choosing the same medium and subject matter, Brian Harper and Tiffany Carbonneau explore the subtleties of the subjective eye. Their contribution of photographs from their trip to China shows different interests: Carbonneau is more interested in flat, visual planes, and Harper more in small details, but they share a sensitivity to the color cobalt, which gives their work a sense of continuity despite differences in scale and subject matter.

While the show is charming, I wish there was a greater diversity of couples drawn from. My compliments to Pfalzgraf, though, on the way this show resists the kind of lurid voyeurism we expect from expressive people and works on their personal lives. It is subtle, gentle and respectful in its approach toward its subject matter, which is why this exhibit comes off like a like a (mostly) well-behaved dinner party upon initial inspection. Yet there is meaningful meat in the lobster for those willing to make the effort to extract it; and “Complimentary” is well worth the time.