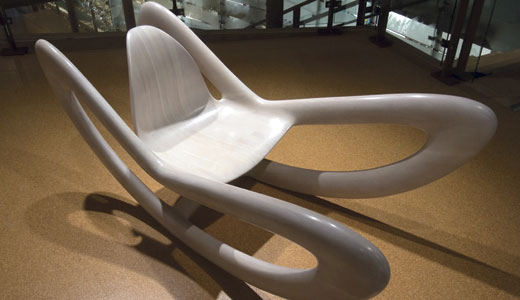 Wendell Castle became part of my artistic life when I saw his “Ghost Clock” at the Renwick Gallery of the Smithsonian American Art Museum in Washington, D.C., in the early 1990s. A trompe l’oeil masterpiece, it masquerades as a grandfather clock covered with a white cloth. Everything, including the drapery, is made from wood. I was hooked.

The Kentucky Museum of Art and Craft (KMAC) is one of several venues celebrating Castle’s 80th birthday with exhibitions. Their excellent show “Wendell Castle: Forms Within Forms,” organized by associate curator Joey Yates, lets us see some of the latest work by an artist who has multiple labels — craftsman, sculptor, woodworker, designer. Being called the “father of the American art furniture movement” has set his bar pretty high.

Yates visited Castle at his Scottsville, N.Y., home and studio. “I got to choose all the pieces (in the exhibition),” he says. “There’s a surreal aspect to his work, and he continuously updates (it). Most of the pieces here are a return to form; these distinguish him as a sculptor.”

Castle’s long history, with a body of work spanning more than 50 years, has led to an exploration of sculptural furniture in a variety of media, including concrete, fiberglass and stainless steel. Production is purposely limited, such as the polychromed fiberglass “Dem Bones” made in 2007 (KMAC has the third in an edition of eight).

I’m especially drawn to his wood pieces, including those using stack-lamination (blocks of wood bonded together), such as the 1968 untitled desk from his home that resembles the expansive tail of a whale.

He has some personal rules for creativity, such as, “The whole secret to designing a chair is applying the seat of your pants to the seat of the chair.” While some of the biomorphic chairs look like it might take a leap of faith to actually sit in them, such as the bleached mahogany rocker “Angel Heart” from 2010 and the 2009 “Concrete Chair (White),” I can attest from personal experience (with the museum’s permission) that they work.

“Castle enjoys having a foot in the craft world,” Yates says. “His well-made pieces stand on the merits of craftsmanship.”

The star of the exhibition is the “Caligari” piano. Created in 1990, Castle based it on two influences — the silent film “The Cabinet of Dr. Caligari” and the art style Abstract Expressionism. Since it’s a working Steinway and Sons piano, KMAC has organized the “‘Caligari’ Piano Performance Series.” Students from the Youth Performing Arts School (YPAS) are playing on Saturday, Jan. 26, at 2 p.m. One of KMAC’s own, director of education Dane Waters, will be performing on Sunday, Jan. 27, at 3 p.m.

The museum is also showing “Home Away Home: New Works by Derrick Snodgrass and Selections from the Permanent Collection” through February.