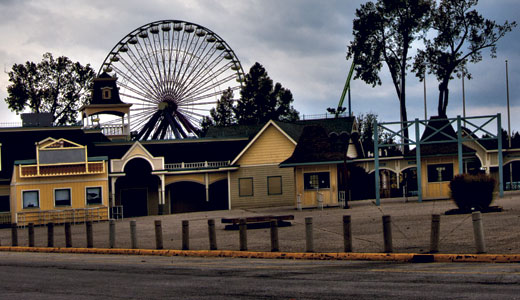 Nearly three years after the bankrupt Six Flags closed Kentucky Kingdom, it now appears the operator who built the park to its peak in the 1990s will have a crack at reopening the amusement park next year.

The company plans to invest $45 million in rebuilding the park — $20 million from their own equity and an additional $25 million from a bank loan — and have it open by May 2014, hoping to immediately compete with regional parks such as Indiana’s Holiday World and Cincinnati’s King’s Island.

There will now be a 90-day waiting period until the lease is finalized, as Hart’s group applies for a potential $10 million in sales tax rebates from the state’s Tourism Cabinet in order to complete the stipulations of their bank loan.

While such optimism of a Kentucky Kingdom opening has unexpectedly crumbled in recent years — first with Hart’s unfruitful 18-month effort to reopen the park, followed by Holiday World’s owners suddenly backing out of a plan to reopen it as Bluegrass Boardwalk last summer — all of the parties involved assume this is the real deal.

“If there’s an earthquake we may reconsider,” Hart said during a Thursday press conference at the Crowne Plaza Hotel across the street from the fairgrounds. “But barring an act of God, I think we’re ready to go.”

The news of the agreement is a dramatic turnaround from last fall, when Gov. Steve Beshear openly doubted the prospects of Kentucky Kingdom reopening and questioned whether the state should use the land for another purpose.

But after three months of successful negotiations with the state’s Finance Cabinet, and a late concession by Mayor Greg Fischer, the prospect of bulldozers razing Kentucky Kingdom appears to have been averted.

While Kentucky Kingdom LLLP still has to jump the hurdle of being approved for tourism tax credits — which they failed to achieve in 2011 — Hart is confident such obstacles of the past are out of their way, with local and state government now fully backing the project, along with a signed lease.

Hart partly credits this deal’s success to the scrutiny and pressure of the media and local activists, which helped convince elected officials that the cost of opening Kentucky Kingdom was worth the economic impact it would have on Louisville and the state.

Considering the contentious way the negotiations between Hart and the state ended in 2011, Beshear’s words of doubt last summer — as well as the fact that the state’s request for proposals was worded in a way that disqualified Hart’s plan to have the state guarantee its bank loan — made many pessimistic that a deal would be reached.

Though Hart altered his proposal to meet the RFP, such pessimism remained following a report by WHAS citing an anonymous source “familiar with the review” who claimed the Beshear administration would reject the proposal, in part because reopening the park “would jeopardize possible future uses” of the property.

While all parties involved agreed they would not discuss negotiations in the media, Thursday’s series of press conferences and press releases touting the agreement shows the Beshear administration was eventually convinced.

From the Fair Board’s press release, Beshear touted the economic impact of an open Kentucky Kingdom, stating, “We are pleased to see that we were able to reach a mutually agreeable lease so the park can reopen as quickly as possible.”

But the Fair Board meeting at which the lease agreement was unanimously approved wasn’t exactly a celebratory affair, perhaps due to the fact that the debt-ridden agency also voted to settle a $1.4 million lawsuit Hart filed against them to recoup funds he previously spent in a failed attempt to reopen the park.

Board Chairman Ron Carmicle and Tourism Secretary Marcheta Sparrow — both of whom were deposed in Hart’s lawsuit and had a frosty reception to his 2011 bid — expressed thanks to members of the board, Finance Cabinet, Beshear administration and Metro government for working hard to approve the lease terms. Hart — whose group is putting in the $45 million private investment that will be entirely owned by the state — was not among those thanked.

Mayor Greg Fischer’s office followed with a press release touting the economic and employment benefits of Kentucky Kingdom, as well as the financial incentives the city would provide. The city has agreed to rebate occupational taxes at the park for 10 years, estimated to total $1 million. In addition, the city will contribute another $100,000 per year for 10 years from the city’s general fund, with the Louisville Convention and Visitors Bureau adding $100,000 per year for five years.

Fischer’s agreement to go beyond the rebate of occupational taxes was a shift in his position from just weeks earlier. On Dec. 31, Fischer told LEO Weekly the city would not provide any further incentives, as “anything else we would do would take away from services to the city.”

When asked what changed for Fischer, spokesman Chris Poynter said, “Because the economy is turning and tax revenues are increasing slightly, this is less of an issue. In addition, finding $100,000 in a $500 million budget generally doesn’t pose many problems.”

“I want to particularly thank Jim King and Kelly Downard of Metro Council for keeping this issue alive in Metro government,” Hart said. “Of course, Greg Fischer’s come on board, but Jim and Kelly were really important in that.”

Speaking with LEO on Monday, Hart couldn’t say for sure why Fischer and Beshear eventually came around, but he assumed it was because the agreement benefited everyone involved and would be a boon for local and state revenue and employment.

“Metro, the Convention and Visitors Bureau, and the state are making many times what they are contributing toward our funding,” Hart said. “There are no freebies here. Everybody is getting something for their investment, as it should be under a well-crafted public-private partnership.”

According to previous economic impact studies commissioned by the state, Kentucky Kingdom could provide a new net economic benefit of around $1 million to Louisville and up to $10 million for the state. This benefit is due to bringing in new customers from out of state, keeping customers from leaving for out-of-state parks, and the multiplier effect on other businesses and hotels from an open park.

Additionally, Hart said the yearly local and state incentives will match the total of their yearly debt payments for their $25 million bank loan. This will ensure that Kentucky Kingdom will not suffer the fate of Six Flags, allowing them to reinvest up to $2.5 million every year into park upgrades, which is required under the lease.

Hart made it a point of thanking the media for continuing to cover the potential economic impact of the park, even when its prospects looked bleak, as well as the Save My Park group of former park employees, for building grassroots support and pressure on government officials.

“They understood the importance that Kentucky Kingdom has on the quality of life and economic development, especially summertime jobs (up to 1,000) in this community,” Hart said. “They kept it alive, no question about that.”