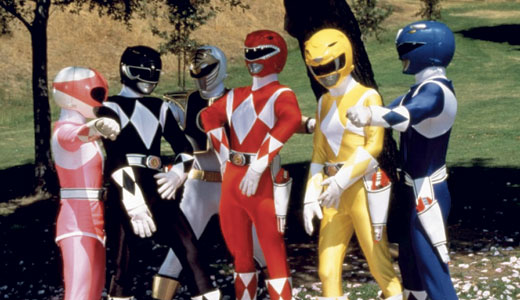 As many savvy LEO readers have suspected, our Music City Uberlords have been systematically replacing your beloved LEO staff writers with automated crap-generating software, thus increasing productivity while reducing flatulence and herpes outbreaks to near-tolerable levels. But it wasn’t until this morning’s scurry from our damp basement quarters that we noticed how bad it had become … We’re the last humans left in the building! Yep, we finally got our choice of office spaces, and not one of them doubles as mop storage.

To celebrate, we’ve decided to focus our annual Video TapeWorm Gift Guide on something near and dear to our hearts: the Mighty Morphin Power Rangers. Our old boss would have had a slit-hemorrhage, but her replacement — the alcohol-fueled BarBelleBot 9000 robo-editor — is slumped over its desk snoring and puddling the floor, just like the real thing. This is gonna be the best Christmas ever!

Frank Zappa famously said, “Art is making something out of nothing and selling it.” And it was with this philosophy that Shuki Levy and Haim Saban launched the modern era of children’s programming in 1993. A heady meld of Jungian archetypes, the Western love of violence, and footage stolen from a Japanese tokusatsu franchise (“Super Sentai”), the Power Rangers were less a TV show than a formula, thus precluding the need for pesky and expensive “plots.”

In the first episode, we meet Zordon, a powerful alien entity stuck in some kind of cheap time/space vortex thingie that prevents him from protecting the universe. And peeing. This being that innocent age before sexual predators came down from the pulpit, he easily cons a gaggle of comely American “teenagers with attitude” into colorful skin-tight spandex suits whenever evil threatens.

The evil was oft provided by his hysterical lunar-dwelling nemesis, Rita Repulsa (Machiko Soga), who would conjure colorful monsters to engage the Power Ranger teens in stylized, nearly contact-free Kung Fu combat. Eventually these en plein air jousts would become tedious, causing the creatures to inexplicably grow to massive size and kick apart a model city. The Rangers, to save the model, would summon their “Zords”: huge dinosaur-themed robot suits that click-assembled into a complex and clumsy Mega-Zord for the noisy climax. Yay! The world was safe until the next episode.

But the group’s real superpower was merchandising. Power Ranger action figures literally flew off of store shelves. Christmas-shopping parents became violent when stocks dwindled, leading to riots, bloodshed — even killings. And then the rage went global with sold-out international live stage shows. Even today, 17 years later, the Rangers are still selling strong in their 19th season, comprising 16 distinct series and two theatrical films, neither of which won an Oscar. And those once-megastar, first-generation actors? Well, they have largely vacated the Ranger Universe — physically, if not in spirit.

For example, you may remember the late Thuy Trang, Yellow Ranger, as the villainess in “The Crow: City of Angels.” A former Vietnamese refugee, she escaped in the hold of a cargo ship to appear in Scientology ads back in the ’80s. Black Ranger Walter Jones is best known today for his voicework on video games such as “Red Dead Redemption.” Jones and Trang both left the show before the third season because they wanted to get paid.

And while David Yost (Blue Ranger) stayed through the entire run of that first “Mighty Morphin” franchise, he left the series unexpectedly when the other Rangers began to call him a “faggot.” Famously enrolling in a “Pray The Gay Away” program, he suffered a nervous breakdown when it didn’t “cure” his homosexuality. He has since resurfaced as a TV reality-show producer, campaigning for same-sex marriage and the action film “Degenerate.”

Red Ranger Austin St. John, who quit mid-season 2 over a contract dispute (he also wanted paid), is now a professional martial artist and successful author. Jason David Frank’s chiaroscuro Green character (later becoming the charismatic White Ranger) started his Morphin life as a bad guy under thrall to Rita Repulsa, but was turned good by the group’s wholesome chop-sockiness. He, too, became a professional martial artist and now owns a Christian clothing line called “Jesus Don’t Tap.” We couldn’t make this stuff up if we tried.

Finally, Amy Jo Johnson, the Pink Ranger: She’s been a TV fixture since leaving the show in 1995, most famously as Julie, the best friend of Keri Russell’s titular “Felicity” on the fledgling WB Network. We always considered AJ to be the heart of the Rangers, thanks in no small part to the way she filled out that pink spandex. Yow! A veritable temple of taut gluteal pulchritude was evident in each spin-kick — so much so that the word “Pterodactyl” (her Zord alter-ego) is now Internet slang for “A highly attractive woman that’s banging.” Ah, the innocent memories of childhood …

But this tumescent remembrance doesn’t have to end! Before this LEO has been laid ’neath the dog dish, you will be able to purchase the entire original three-season series, plus bonus goodies, on 19 discs for $119.95 or less at your favorite vidstore. Previously available only piecemeal via cheezy late-night Time Life TV come-ons, this complete set is a godsend to anyone with a TV and flannel yammies during the early ’90s.

But you can get yours free! As a special Christmas treat to all the good little boys and girls in LEOland, The Video TapeWorm and Shout! Factory have joined forces to give away one set on Dec. 12. Check out videotapeworm.com/video.php for all the details.

Merry Christmas! And if you’ve got any pictures of yourself in spandex, send ’em on. It’s gettin’ really lonely in here …