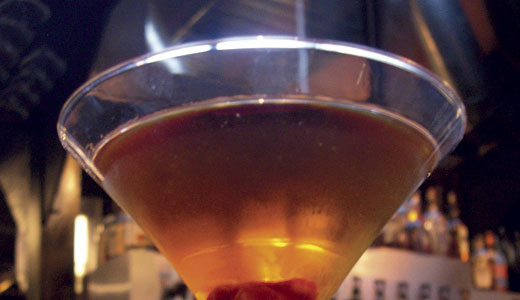 Winter is the perfect season for staying toasty and toasted. What else is there really to do other than throw snowballs at strangers and fly south? Louisville’s fine cocktail establishments have dusted off their seasonal drink menus by now, which means hot toddys, hard apple ciders and hot chocolate bourbons for everyone! And by everyone, I mainly mean me, as I was on assignment and needed wintertime drink suggestions stat. Here’s a list of five delicious drinks that will keep you warm and hug you like your daddy never did.

First up is the standard cold-weather drink, the Hot Toddy, which was first invented to put babies to sleep and ease that scratchy sore throat. The basic recipe involves adding bourbon to hot water … and maybe a squirt of honey. But at the Silver Dollar ($7, 1761 Frankfort Ave., whiskybythedrink.com), bartender Rebecca does it a little different. Her concoction mixes Old Grand Dad with muddled lemons, house-made honey syrup that uses Bottled in Barn honey from Simpsonville, a splash of Allspice Dram, and hot water. The comforting drink was served in a coffee mug and nipped my nagging cough from the bud in the bud. I’ll have two more.

Next on my jubiliscious journey is the Cider Manhattan from Marketplace Restaurant at Theater Square ($12, 651 S. Fourth St., theatersquaremarketplace.com). This award-winning cocktail is so fabulous they keep it on the menu year round, even though it tastes best when temperatures dip below 30. Playing off your standard Manhattan, bartender Nicole flambéed my cherry (it was hot) and then dropped it into a martini glass with Woodford Reserve, cider reduction and Antica bitters. Manhattans are my very favorite drink, and this version paid homage to tradition while spicing it up with a seasonal cider. If they weren’t $12, I would have ordered six more and called it a night.

But no, I had to press on and complete this titillating trail of ’tails, which led me to Toast to tackle their Spiced Apple Mimosa ($6, 620 E. Market St., toastonmarket.com). Like all poisons, I think champagne should be enjoyed in moderation. You cross that line and you can kiss seeing the sun tomorrow goodbye. But this mouth-watering version of a mimosa mixes a unique apple cider reduction with sparkling wine. I think I downed it faster than the server could bring my check. It was that delicious. Again, I would have liked a pitcher of the stuff, but my DD was getting bored watching me torture my liver.

Now it’s out to the East End to Bonefish Grill for Johnny’s Hot Woodford Cider ($8.50, 657 Hurstbourne Pkwy., bonefishgrill.com). I don’t travel to the outskirts very often — occasionally a trip to the mall is warranted when I lose my lipstick — but this drink, I heard, was worth it. And it was. Johnny the bartender marinates Woodford Reserve with fresh Granny Smith apples, butterscotch and banana schnapps, and other ingredients he didn’t want to reveal. He then takes this concoction, which has been sitting for a few days, and pours it into a Crock-Pot behind the bar. The drink is served warm in a sifter glass rimmed with cinnamon and sugar. To say it soothed my sore throat and held me tight like a Garfield Snuggie would be an understatement. Bonefish also has a Winter White Cosmopolitan on its menu, which had floating cranberries and looked like something Santa would hunker down with on Dec. 26.

But let’s face it. As soon as Santa gets done shoving presents down your chimney, he’s heading to the Back Door to shove presents down his own chimney in the form of The Gunner ($4.75, 1250 Bardstown Road, thebackdoor.us) — my last stop of this parched passage. If the Grinch drank an LIT, this would be his version. The Gunner not only warms your insides, it ignites your nervous system faster than rocket fuel could. A generous pour of Jameson is mixed with Kahlua, Baileys Irish Cream and coffee, and topped with whipped cream and a cherry. Sink your straw and drink fast — oxygen will make it burn even more, and the Baileys will start to curdle at the bottom if you let it sit too long. Not that I would know.