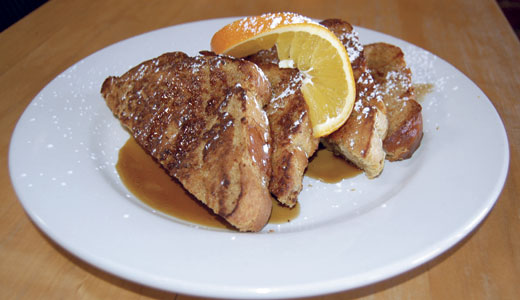 During this time of year, when it gets dark early and the sun plays hide-n-seek, I find warmth and comfort in food. It stems from childhood, I suppose, having been raised in a home where most dinners featured comforting, made-from-scratch dishes. So when our fickle fall weather succumbs to freezing temperatures, I reflexively crave meals to warm me from the inside out. On a mission to find dishes that could battle the chill, I recently visited a few places around town — some old, some newer, one take-out, the others dine-in.

Safier Mediterranean Deli
I’ve been a regular at this place for years and have never been disappointed. Safier has a strong lunch following with delicious daily specials that frequently result in a line out the door. On a particularly cold and rainy late-November day, I had my heart set on their usual special of chicken biryani. However, when I arrived, it wasn’t available, and chicken tikka masala was in its place. A little disappointed, I ordered it anyway … and wow! I now firmly believe I have a Foodie Fairy Godmother. The tikka masala features large, tender chunks of chicken breast cooked Tandoori style in a tomato cream sauce served with a generous portion of their house salad, jasmine rice and pita for $7.99. Upon lifting the lid, the fragrance was intoxicating. I was so eager to dig in that I burned my tongue. Even with the tail end of a head cold dulling my taste buds, the flavor was intense but well balanced. Each bite had me identifying a different spice — cumin, coriander, ginger, nutmeg, and more. A slight spiciness eventually kicked in, and by the time my plate was (quickly) cleaned, I was happily sniffling from the heat. I then went on to sop up the rest of the sauce with my pita. I opted to have my salad last, and the tangy, perfectly salty house vinaigrette was a great palette cleanser. I love Safier’s pickles, so they were saved for my dessert. Safier also has many wonderful, meatless dishes to choose from, and their hummus is my all-time favorite.
Safier Mediterranean Deli
641 S. Fourth St.
safierdeli.com

The Irish Rover
I hopelessly crave soups and stews this time of year. When it comes to stew, my mother’s is near the top of my list, but I have to admit, I may favor the Rover’s Guinness beef stew ($6.95) slightly (sorry, Mom!). My only real beef with this dish is that a larger portion would’ve been better. The stew isn’t all that chunky, but for me, the star is the delicious, slightly thick and savory broth. The meat is moist and tender, as are the chunks of potatoes, carrots and celery. The subtle taste of Guinness adds a different level of flavor to the stew that my mom’s never had. My friend ordered the cottage pie ($10.95) — the stew in a bread bowl topped with mashed potatoes and cheese. She loved it. I was tempted to order it, as well, but an impending trip to Florida prompted me to opt for the less indulgent classic stew. I enjoyed the complimentary soda bread and used it to clean up every last drop in my bowl. Given we started the meal with an order of bubble & squeak ($2.95) — crispy mashed potato cakes with bits of onion and vegetable — I was pleasantly full when all was said and done.
The Irish Rover
Crescent Hill: 2319 Frankfort Ave.
La Grange: 117 E. Main St.
theirishroverky.com

Guaca Mole
If you’ve enjoyed Havana Rumba and/or Mojito Tapas Restaurant, chances are good you’ll love Guaca Mole, which is run by the same folks. We started things off with the guacamole sampler — hearty helpings of three separate guacs (my favorite was the Yucateco). My friends split the tamales vegetarianos, while I opted for the spicier camarones de la diabla, which includes shrimp, guajillo lobster sauce, onion, peppers and lemon oil ($13). My camarones were served in a cast iron dish on a wooden plank with a side of warm, housemade tortillas, along with refried black beans and rice, both cooked perfectly. A rich, red, tomato-y sauce enveloped six good-size shrimp, topped with a garnish of julienned apple and fennel. The dish delivered an outstanding aroma, and you could smell and taste sweetness from what I assumed was wine. Though the heat from the peppers was mild, it escalated with each bite, making for a truly warming meal.
Guaca Mole
9921 Ormsby Station Road
Check out Guaca Mole on Facebook

North End Café
I woke up with a craving for a hot, sweet stack of pancakes. Despite the previously mentioned beach vacation on the horizon, sometimes you’ve just gotta treat yourself! I hadn’t been to the Highlands location of North End yet, so I checked their website, spied their pancake special of the week and headed out. To my disappointment, however, the pancake special on the website was outdated. Insert sad face here. Luckily a regular menu item, the orange spiced French toast ($7.99), sounded like a suitable backup. First impression: The portion of French toast is massive and could easily be shared. Four inch-thick triangles of bread were covered with powdered sugar. After giving a piece to my friend (who ordered a single vegan taco for $2.99), I topped my remaining three with a smidge of butter and some rich, brown maple syrup. Then I dug in. The bread had a cake-like texture, which was good and filling, though I typically prefer a slightly wetter French toast. The taste of orange was subtle, but cinnamon and other spices gave it a great wintery flavor. My mom used to make an orange-spiced tea every winter when I was a kid, and this dish brought back memories. If the maple syrup had been warm, I would’ve been in heaven. It was delicious, nonetheless, and even after sharing a wedge with my buddy, I had one to spare.
North End Café
Highlands: 2116 Bardstown Road
Clifton: 1722 Frankfort Ave.
northendcafe.com