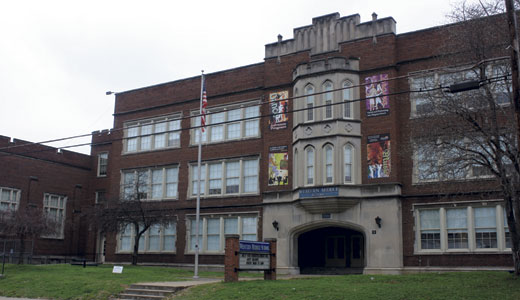 It’s a gray, October morning, about 7:45. At 22nd and Main streets, the faint smell of coffee wafts from a few classrooms and offices at Western Middle School. Two-way radios gently squawk about a leak in the auditorium. Principal Bill Anderson, a tall, athletic middle-aged man with a young, thin face and white hair, bounds up the steps to the seventh grade floor, picking up wrappers from straws and a Rice Krispies treat along the way.

As he leads me down the hallway, he points out that students sit so quietly, heads tucked into books, teachers can leave their doors open. Occasional noise surfaces: sniffles, coughs, the sharp tick of a kitchen timer counting down the minutes until morning reading time ends.

Part of Anderson’s pride for his docile, studious kids stems from Western’s difficult past. First came the November 2010 designation as a persistently low-achieving school. Next, a new administration, including Anderson, and a young teaching staff swept in. The school converted to a visual and performing arts magnet school. That change reshuffled and reduced its student population. Academic performance has since climbed.

This morning marks LEO’s first of two days spent visiting the school for a piece profiling its transformation.

I watch not-quite adolescent faces stare into mirrors as they sketch self-portraits in visual arts, while down the hall, a veteran math teacher leans over the shoulders of struggling students in need of extra, in-school help. Students shuffle between classes, heading up and down staircases designated for their grade.

In his office, an energetic Anderson, who worked at an Oregon charter school before Jefferson County Public Schools hired him in 2010, speaks in volumes about his orderly school, professional development and the boost in test scores during his tenure, often bouncing from one topic to the next. As of this interview, the 2011-2012 test scores (which the state warned would be low due to new, tougher standards and tests) still have not been released. Anderson feels the pressure. Like many principals at persistently low-achieving schools, his job hangs largely on the ability to keep students moving forward.

But on the day of the official test score release — Nov. 2 — news broke that Anderson had been placed on paid administrative leave. It had nothing to do with scores; rather, an investigation into his professional behavior was under way.

As a result, LEO put the original story about Western’s turnaround on hold pending the outcome of the investigation.

Interviews with three Kentucky Department of Education employees, a former Western assistant principal, two counselors, a bookkeeper and eight others (no teachers) outline profane, erratic rants in meetings and around school.

Theresa Whitlow, a Kentucky Department of Education staffer, reported that last March, Anderson made the comment, “(I’d) like to take that God damn fucking teacher and throw her out the second story window.” Reportedly, this was in regards to a new teacher with classroom management issues. (Anderson’s reliance on the F-word comes up a lot in the 100-plus page report.)

Aileen Venning, a bookkeeper, stated that after learning about a suicidal student around the holidays, Anderson said, “Give her a razor blade for a Christmas present.” (Stefanie Mills, a secretary also interviewed in the report, contends that Anderson was joking and addressed the situation with “great care and concern.”)

Upon learning of 60 limited-English speaking students Western would acquire a few days before school began, Anderson allegedly stated, “The first day of school will be raining Hispanics.”

In a written response included in the investigative report, Anderson claims that: “To increase the freedom of speech and dialogue among my administrative and resource team, we established what we called the rule of Vegas, as in ‘What goes on in Vegas, STAYS in Vegas.’”

In his response, Anderson indicates that profanity mainly occurred behind closed doors, and though he acknowledges making many of the remarks highlighted in the investigative report, he says they were taken out of context.

“Profanity was never directed at anyone,” he writes. “If anything it would be used as adjectives.”

A few co-workers back Anderson. Stefanie Mills, the secretary, writes, “Mr. Anderson has what every person in a position of leadership needs, a group of colleagues who understand the trials of running a middle school.”

Still, it’s clear Anderson’s sense of humor and vocabulary upset some colleagues. A former assistant principal, Sharon Gray, describes him as “condescending and disrespectful.” A security monitor, Derryl Porter, states, “The environment at Western is miserable.”

In his termination letter, Superintendent Donna Hargens says Anderson violated the Professional Code of Ethics for Kentucky School Certified Personnel “by failing to exemplify behaviors which maintain the dignity and integrity of the profession.”

Attempts to contact Anderson through his lawyer were unsuccessful.

This news comes at an awkward time for Western. It’s currently the registration and application period for JCPS, a time when parents research and select schools. That troubles Jane Walsh, parent to a Western Middle School sixth-grader. She and her daughter “couldn’t be happier” with the school, its teachers and the arts program.

She worries the negative press around Anderson’s termination will deter parents from considering the school that’s already battling a history as a low academic performer, as well as its location. Several teachers tell LEO they’ve encountered parents who initially hesitate at the idea of choosing a school in Portland. (JCPS does not release preliminary application numbers.)

“What everyone knows about Western now is that they had a rotten principal,” Walsh says. “I think there’s another story that can be told.”

When Anderson arrived in 2010, Western Middle was among the worst performing schools in the state. According to the 2009-2010 state report card, about 27 percent of students were proficient or better in reading, only 16 percent in math. The following year, 37 percent of students tested proficient or higher in reading, nearly 29 percent in math, a steady increase. As predicted, Western’s scores dipped last year under the new, more rigorous accountability system. The school ranked in the 4th percentile.

Still, teachers LEO spoke with in October expressed excitement about momentum. Attendance rates had grown. Discipline problems had dwindled. A social studies teacher who started at Western just before the school’s turnaround efforts recalled an era of frequent scuffles and kids acting up in class. (LEO is not naming teachers because we interviewed them prior to Anderson’s termination under the premise of a different story; attempts to reach them again were unsuccessful.)

Now, teachers utilize strict protocol. They escort kids between classes. Students know when they hear the words “level five transition” it means silence as they walk.

It’s important to note that the student population of today differs from a few years back. According to JCPS data from the 2008-2009 school year, before becoming a magnet, Western housed about 500 students, 64 percent of whom came from the 40212 ZIP code, which includes Portland and Shawnee neighborhoods.

Upon establishing its arts magnet, student requirements were constructed. Applicants need to hold a 2.5 GPA. Behavioral issues are assessed. Each child picks an arts discipline, be it drama, choir, dance or visual arts.

By the 2010-2011 school year, the student population had dropped to 292. About 39 percent of students came from 40212, the rest commuting from other areas in west Louisville, downtown and east Louisville.

“This is where they were sent versus this is where I choose,” she explained. “And if this is my choice … this is what I want to do, you automatically have an intrinsic motivation.”

Still, she and a few other teachers credited Anderson and a team of new, young teachers with bringing high expectations and order.

“(There’s) more complete school buy-in now than there was from personnel,” the math teacher said. “Because they know if you choose to work here, this is the kind of school (it’s) going to be. “

But the individuals interviewed for the investigation into Anderson’s demeanor describe the “tone of the building” as one of intimidation. Take, for instance, an email Anderson sent out with the comment “dead man walking” next to a teacher’s name. In a subsequent email, Anderson instructed staff to disregard the previous message.

The school’s bookkeeper, Aileen Venning, described Anderson as “out to destroy anyone that does not conform to his agenda.”

According to the report, Michael George, the liaison for community support services at Western, reported that Anderson “does not want the community in his school and his actions have shown that.” He goes on to say that several community organizations “have stated (to) me that they do not want to be involved with this school … because of Mr. Anderson’s continued abuse of power and almost despotic personality.”

But parent Jane Walsh never sensed a threatening, aggressive environment. She says when she and her daughter toured middle schools, her daughter chose Western because it just seemed “happier” there.

“That was her reasoning. And we’ve always had that sense,” she says. “I didn’t know anything about what was happening with the principal at all. And I’m sorry the people in that building had to work in a tough environment. And I’m impressed with how little it showed. Really impressed.”

Walsh and another parent, Geoff Glaab, who lives three blocks from the school, were surprised when they discovered the circumstances surrounding Anderson’s firing. Glaab shares Walsh’s concerns that this event will overshadow Western’s gains. He says Western’s got a lot of talented, smart kids.

“I hope people can see the forest through the trees,” he says. “And be able to see that school has turned around.”

“I think parents are part of school communities. And if something unsettling is happening in the school, they should know first and they should not find out in the newspaper, because it alienates your biggest supporters, which are your parents. I think that was a misstep,” she says. “What makes me feel shaky is that I don’t know what this will bring.”

She’d like to see the school or district hold a meeting for parents to reassure them that Western’s trajectory will remain upward.

Interim principal Steve St. Clair tells LEO in an email that: “Western Middle is one of the best-kept secrets in Jefferson County. It has incredible potential and will only become better with each passing year.”

School Board member Diane Porter echoes this sentiment. She did not want to talk about personnel issues but states, “Western Middle is working very hard for student success. The magnet program is appreciated by the community as a choice for students.”

Just how this latest transition will impact Western, a school that’s endured multiple changes over the last few years, is tough to say. Walsh puts her hopes plainly: “It’s a great school. And I want it to stay a great school.”