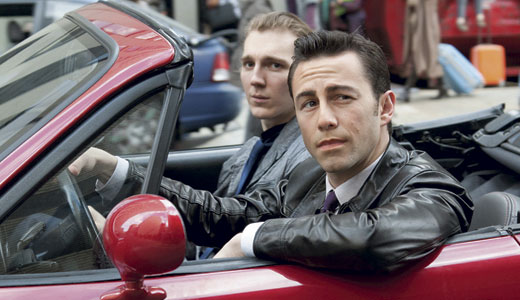 It’s hard to believe that we’re already in the third season of this terrific FX series set in the coal-mining slums of Eastern Kentucky. Timothy Olyphant rawks as Deputy U.S. Marshal Raylan Givens, a man who once played by the rules but now does whatever is necessary to survive in a world overrun with organized crime, drug cartels and slimy local politicos. We could go on listing the phenomenal cast credits — and all the awards won — but to keep this short and sweet: If you haven’t seen this, start; if you don’t own the DVDs, then you haven’t begun to appreciate just how gritty, provocative and intelligent this really is. Buy. It.

Time-travel movies are a mixed bag. Because they are relatively inexpensive to make but have infinite dramatic potential (see “The Terminator”), they are often the bailiwick of low-budget, high-minded indie hacks. But in the hands of talented, experienced people, they can be gold, as in this truly excellent drama starring Bruce Willis and Joseph Gordon-Levitt as Willis’ younger self. The premise starts with JGL as a hitman in the present. His boss is in the future, a syndicate that sends enemies back in time for him to kill, leaving no trace in the future. So, what happens when he recognizes that his next victim is his future self? One of our favorite movies of 2012, with an excellent script and top-notch co-stars including Emily Blunt, Paul Dano and Jeff Daniels. A must-own.

The Solar Impulse is a long-range Swiss solar-powered aircraft project that intends to fly its graceful zero-fuel plane nonstop around the world — even at night — most likely in 2015. But the real story here are the adventurers behind the plane, particularly Bertrand Piccard, who performed the first nonstop balloon circumnavigation of the globe in 1999. His father, Jacques, holds the world’s record for the deepest dive in a submersible, 7 miles into the Mariana Trench. His grandfather was the world’s first astronaut, piloting a balloon 10 miles up; high enough to see the curvature of the Earth. A fun look at some of humanity’s best and brightest.

This family-friendly comedy mines familiar territory — two very different people switch bodies — but the results are fresh and lively. Gorgeous Jamaican/Asian teen nerd Chyna Layne (“Precious”) and dimwitted jock Jake Waldman star as the mismatched high-schoolers in a pickle (one of which discovers a pickle). Simple fun exploring family and other relationships from a goofy point of view.

Gabriel Iglesias, a frequent visitor to Louisville, is back with another season of his Comedy Central series showcasing some of the nation’s best up-and-coming stand-ups. But our favorite thing about these discs is the clever animated versions of “Fluffy’s” most famous jokes. What a hoot.

While Gregg Allman will never be the unearthly talent that his brother Duane was, he is a fine singer/songwriter in his own right and has done an admirable job keeping the legacy of the Allman Brothers alive. This never-before-seen recording is from a 1988 Nashville concert that includes the title song and much of the legendary Live at Fillmore album, especially a wonderfully out-of-control rave of Blind Willie McTell’s infamous “Statesboro Blues.” Highly recommended.

Fans of the “Mass Effect” vidgame franchise are foaming at the mouth waiting for this, the first full-length motion picture treatment by Bioware and Production IG, a prequel that set the stage for the recently released “Mass Effect 3.” Stars Freddie Prinze Jr. as a much younger version of Lt. James Vega than gamers have seen before. After his commander falls in battle, he must rally together whatever resources he can find to defend his colony from the evil alien Collectors.

Fans of over-the-top indie horror cinema fondly remember 2006’s “The Hamiltons,” in which a commonly dysfunctional suburban orphaned family lives seemingly unremarkable lives … except that they are all vampires. In this sequel, they are forced to relocate in the UK under the name “Thompson” and have the added baggage that one of their own, little brother Lenny, is badly injured after a gas station debacle. But hope arrives in the form of a pub, which is reportedly the home of another vampire clan. But will they be friend or foe? From the legendary Butcher Brothers, co-starring stunning Elizabeth Henstridge.

Like any creative endeavor, this show has evolved. What started out as a tragic/comic study of a man with a Peter Pan complex — indulging in booze, drugs and lots of dangerous sex, while simultaneously holding his child and baby-momma in reverence — has run out of ways to shock us. But that’s not to say they aren’t going to try! Arguably the greatest cast on TV, working with imaginative and clever scripts in an environment largely free from censorship, makes this the standard-bearer for cutting-edge TV, the one all the other networks are trying to copy. This season finds Hank (David Ducovny) back in L.A. writing for “his” lame TV action-comedy with Natascha McElhone, Madeline Martin and Pamela Adlon in tow. Entertaining has hell.

HOUSE OF LIES: SEASON ONE

Don Cheadle, one of the best actors working today, is outstanding in this Showtime dramedy series that skewers the current “today’s profits at any cost” mentality of corporate America. Cheadle wonderfully comes to hate himself and everyone around him for the things he does. The result is raunchy, subversive, first-rate entertainment with sexy Kristen Bell. What more could you want?

Up-and-coming gay filmmaker Ronnie Kerr wrote, produced and stars in this drama about a man, recently retired from the Navy, who comes to live with a friend in LA. The friend then sets him up with Australian Navy man Josh, and they hit it off, but a misunderstanding soon separates them. The bulk of the movie explores the many aspects of male relationships and the role of well-meaning friends in our lives as they spend six months gently trying to bring the two back together.