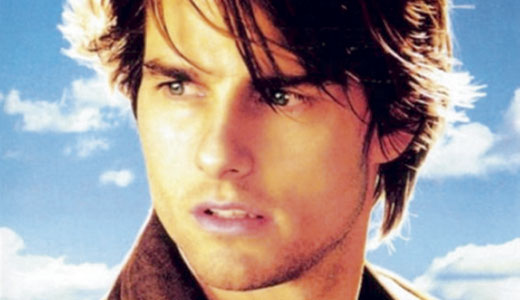 THE SONS OF KATIE ELDER

This isn’t John Wayne’s best movie, but it is damn good and rather historic. “True Grit” director Henry Hathaway held production while Wayne battled cancer — contracted, many believe, filming “The Conqueror” in a former nuclear test site in Nevada. Here he is visibly thinner but still vibrant and clear-eyed, in a standard latter-day Western as one of the titular sons avenging the death of his frontier mother. Co-stars include Dean Martin, Earl Holliman, Martha Hyer and Michael Anderson Jr., who, of course, is the great-nephew of actress Mary Anderson, one of the America’s premier Shakespearean actresses for whom Louisville’s Mary Anderson Theatre was named. It sat at 625 S. Fourth St., next to what is now Cunningham’s restaurant.

Penelope Cruz and local lad Tom Cruise star in Cameron Crowe’s remake of the Alexandro Amenabar thriller “Abre Los Ojos,” which also starred Ms. Cruz. “Our” Cruise plays a smug, rich SOB (kind of a stretch) who can’t tell dreams from reality and gets stuck in one of those ever-evolving time-loop thingamaobobs. Of course, reality in Tommy-boy’s world is having to choose between Cruz and Cameron Diaz for nookie — so it might as well be sci-fi for the rest of us! A bunch of cool support from the likes of Kurt Russell, Jason Lee, Noah Taylor, Timothy Spall and Tilda Swinton make this pill easy to swallow; now available for cheap.

BEING HUMAN: THE COMPLETE SECOND SEASON

While we personally prefer the original British version of this series (the one not afflicted with SyFy-itis), that’s not a slight: This is one of the more entertaining shows we know. Three attractive, young, yet very different people (Sam Witwer, Meaghan Rath and Sam Huntington) share an old Boston brownstone, dealing with all the interpersonal complications that entails. Oh, did we mention that they are a vampire, a ghost and a werewolf? Together they protect each other from the world — and vice versa — and just try to live their “lives” like everyone else. If you’re ready to move on from sparkly vampires, you’ll like this.

Fans of T&A TV know that this was the final season for America’s PI darlings. Jaclyn Smith was the only returning original Angel, with Cheryl Ladd having long ago replaced Farrah Fawcett-Majors; Tanya Roberts drops into the bikini of Shelley Hack (who had supplanted Kate Jackson). But despite the cast changes, the show stuck to its guns and delivered action, adventure and a sense of … OK, we can’t do this anymore. No one ever took this show seriously, and for good reason: It was just a silly excuse for former models to slink around half-dressed, or run down the beach, breasts flopping to the sound of the do-wacka soundtrack. It was AWESOME! The first-ever stand-alone full-season-five release. Enjoy.

Robert Pattinson, riding his “Twilight” cache, stars as a young man with everything: money, power, respect and a big score on the horizon. But a limo trip to his childhood barber turns into a battle for his life when a risky business deal, a parade of interesting (and sometimes lethal) characters, plus full-blown riots in the streets combine to bring his world crumbling down. Originally set to star Colin Farrell, it rides the border between absurdist comedy and art-house overindulgence, very much a “midnight movie” at heart; not for everyone, but a flawed treat for those looking for something different.

Damn entertaining spoof on Trekkies and TV sci-fi; one of the best PG-rated films we know. Tim Allen does the William Shatner bit; Sigourney Weaver is the eye-candy in the push-up bra whose only job is to repeat what the computer says; Missi Pyle is the cute alien chick; and Alan Rickman is the p.o.’ed thespian trapped in prosthetic makeup. Glorious, and now on Blu-Ray.

THE TROUBLE WITH BLISS

We’ll bet that you never heard of this star-infested indie comedy, but it’s worth a look. Michael C. Hall stars as a 35-year-old NYC slacker living with his exasperated, widowed father, the always amazing Peter Fonda. His too-young girlfriend, Brie Larson from “21 Jump Street,” is being challenged by sexually aggressive neighbor Lucy Liu. Exactly why is anyone’s guess. Nothing in his life seems to be going right, but despite it all, he realizes that he’s on a journey, and that the journey is changing him in subtle ways. We liked it.

There have been at least nine movies with this name, the best being the great 1944 Ray Milland spooker. But this new one has a great cast, starting with Emily Browning and spankable Arielle Kebbel as sisters, one fresh from a mental hospital after the death of their mother. Together they must cope with a cold dad (David Strathairn), an evil stepmom (Elizabeth Banks) and a pesky ghost. While it suffers from its PG-13 limitations, this delivers some fun shocks and a few twists. One of the last films of Don S. Davis, the venerable Major Gen. George Hammond of “Stargate SG-1.”

WAR OF THE DEAD

While the acting is just plain terrible — and the special effects aren’t much better — this is still an entertaining and enthusiastic Nazi zombie flick. An elite group of soldiers is surrounded on the battlefield but escape with heavy casualties on both sides. Then they notice that the enemy dead are still running after them! Stars no one you ever heard of, some of them from Finland, Italy and Russia, but they seem to be giving it their all in this love letter to action, war and zombie flicks from the grindhouse era. What’s not to like?