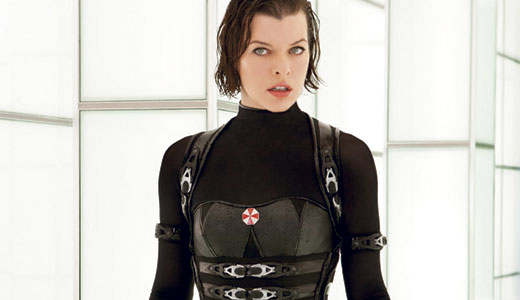 The deadly Umbrella Corporation blah blah blah. If you don’t know what to expect from an RE movie, then you probably wouldn’t be interested — but all the rest of us know that you spell “entertainment” with a capital “RE”! Milla Jovovich (natch) once again slips into her skin-tight leather to fight back the corporate zombie hoard — as well as some former friends — only to discover everything she knows might just be an illusion. A bloody, nonstop continent-hopping undead ass-kicking available in cool 3-D. ’Nuff said?

Colin Farrell and Kate Beckinsale do a slightly more faithful telling of Philip K. Dick’s mindbending “We Can Remember It For You Wholesale” than Arnold Schwarzenegger’s 1990 version, but whereas that movie was a straight-up sci-fi-actioner, this one is more of a chase movie with sci-fi effects (not necessarily a bad thing). Like its predecessor, this one also has a great cast, with Bryan Cranston as the evil chancellor and the always-welcome Bill “Davy Jones” Nighy as the leader of the resistance. At the heart of it all is the classic Phildickian exploits of a man who seeks a “mental vacation” but finds that his implanted memories may cost him his life … Or is it all just a crazy dream?

During the racially troubled 1950-’60s, white author John Howard Griffin chemically died his skin black to immerse himself in African-American culture. His ensuing book was heralded by a generation of activists and quickly turned into this film, with James Whitmore playing Griffin, experiencing life in the Jim Crow south with help from Roscoe Lee Browne, Clifton James, Will Geer and (for some reason) Heywood Hale Broun. This groundbreaking film has been out of print for almost a decade; highly recommended.

The third in this excellent kid series finds Zachary Gordon dealing with summer and all the social miasma therein. Despite his own plans to spend the season on his butt playing video games, his dad (Steve Zahn) wants him out of the house, hopefully in gainful employment. So when the kid starts hanging out at a swanky country club pool to be near his would-be girl, Peyton List, his dad assumes he’s found a paying gig. What happens next could be fodder for any of the 100 lame cable-kid-TV sitcoms, but the makers of this series know how to deliver real laughs, real warmth and real entertainment without talking down to anyone. Excellent.

HOUSE OF LIES: SEASON ONE

Don Cheadle, one of the best actors working today, is outstanding in this Showtime dramedy series that skewers the current “today’s profits at any cost” mentality of corporate America. Cheadle wonderfully comes to hate himself and everyone around him for the things he does. The result is raunchy, subversive, first-rate entertainment with sexy Kristen Bell. What more could you want?

This little crime potboiler/black comedy — originally garnering an NC-17 rating as directed by William “The Exorcist” Friedkin — is truly over the top. Emile Hirsch is a loser whose mom takes off with his stash, leaving him with a debt to very bad people. So he hires Matthew McConaughey to kill her for the insurance money, except that he can’t pay the up-front fee. That’s OK, McConaughey will take his sister, Juno Temple, as sexual collateral! It gets really sick from there. Recommended, if not for everyone.

Joseph Gordon-Levitt, an adrenalin-fueled bicycle messenger in NYC who risks his life dozens of times every day, is handed one package too many. That one puts him in the crosshairs of a bad cop, played by Michael Shannon in full-tilt insanity mode, who is willing to kill him and anyone who gets in his way to prevent it from being delivered. What follows is arguably the greatest chase film ever made as JGL weaves through traffic, pedestrians and buildings at incredible speeds with Shannon just inches behind.

We had the great good fortune to see Mike Birbiglia perform this one-man show live in Louisville last February. It was exceptional, but no more so than this feature-film version in which “Birbigs” tells us the story of his life: how he became a comedian, the terrible pitfalls of such a decision, the insanity of American life (including the day he was forced to buy a new car for the drunk driver who totaled Birbig’s own car, nearly killing him), the joys of sex, the dark perils of dating, and all the other things the rest of us suffer through without Birbig’s wit at our disposal. Definitely worth your time.

A great movie, but as challenging to follow as “Inception.” As Dennis Quaid reads from his biographical novel, “The Words,” we see a version of his own life, with Bradley Cooper as the struggling writer engaged to superhot Zoe Saldana. While he toils away, she buys him a used satchel that contains the manuscript of a book. Cooper puts his own name on the manuscript and it becomes a success. That’s when Jeremy Irons — the real author? — begins following him around, and characters from the book seem to appear in daily life. Or did we just lose track at that point? Hard to say, but fascinating.

TROUBLE WITH THE CURVE

Clint Eastwood plays a legendary baseball scout in a game that has become more business than sport, and the head office is losing faith in him. The only one he can turn to for help is his somewhat estranged daughter, Amy Adams; their relationship forms the core of the movie. Not his best, but watchable.

Channing Tatum headlines this indie comedy about a group of high school friends who hook up again 10 years after graduation. Tatum is about to propose to (real-world wife) Jenna Dewan-Tatum when old flame Rosario Dawson shows up. A former bully (Chris Pratt) has married the hot cheeleader (Ari Graynor) and wants to apologize to everyone for being such a douche — until he gets a few drinks in him. Also stars Justin Long, Max Minghella, lovely Lynn Collins, Oscar Isaac and super-sexy little Kate Mara.

Fans of “Plan B,” Argentine filmmaker Marco Berger’s controversial comedy about a heterosexual man who begins to have desires for another man, will like this groundbreaking tale from the same director. Here the hetero is a 30-something swimming instructor (Carlos Echevarria), the target of a 16-year-old sexual predator and student, Javier De Pietro. But unlike “B,” this is a hard drama about real, flawed individuals dealing with the trials of being merely human.

We don’t usually mention any of the scores of MMA-inspired mayhem movies that come out each week, but this one is different for two reasons. The first is world kickboxing champion Gary Daniels (“The Expendables”), and the other is Peter “RoboCop” Weller, most recently seen in “Dexter.” Weller plays the requisite slimy evil crime boss who forces Daniels to, er, fight, despite the man promising his wife and son that he wouldn’t. Great battles, great actors and a good script come together surprisingly well for such a low-rent film.

This little teaming of Elizabeth Olsen and Josh Radnor (who also wrote and directed) slipped under the radar because … well, because it’s not his best work. Not to say it’s bad, but it’s just a nice, light little romcom, and people tend to expect deeper stuff from him. Here he’s a mid-30s college admissions counselor who visits his alma mater and falls in love with a much younger student (Olsen, winsome as ever). Great actors exploring wistful memories of youth and the pitfalls of life.

MANKIND: THE STORY OF ALL OF US

This anthropological adventure from the History Channel is all about our favorite damn smelly apes … humanity! Beginning with our first experiments in Mesopotamian socialization and ending with Christopher Columbus’ trek to the New World, it shows that our basic goals haven’t changed one damn bit, only our technology. And our savagery. Twelve extremely entertaining episodes.