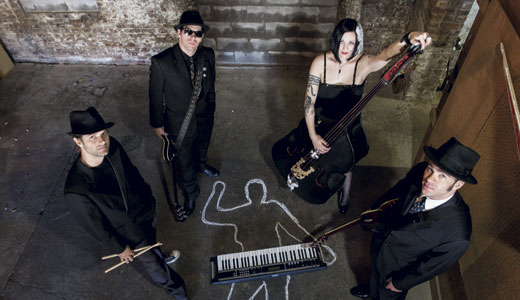 King and Verity Vice are a couple made for each other, like Lulu and Sailor in “Wild at Heart” or Johnny and June. The leaders of the self-described “Psycho Rock” band Vice Tricks, they are proud parents of a new album, the self-titled full-length debut of their four-year-old band.

After releasing a couple of EPs recorded with friends “in exchange for getting them stoned,” the band — which also includes guitarist Jeremy Climer and drummer Ian Bottomley — went to Sneak Attack Studios in Lexington to document their sound professionally, having won the studio time in a competition.

Singer/songwriter/guitarist King, who downplays his first name, Jeremy, professionally, and Vice — known to the government as Verity Jones — met 15 years ago at a show he was playing at Pandemonium on Bardstown Road and quickly became “best friends,” they agree, from the motorcycle ride they took through Cherokee Park the next day through today.

Vice began playing her signature upright bass while King was still playing with his old band, Dead City Rejects, which lasted a decade. When that ended, “I wanted to start something new,” King says, “so I asked her to join, and we started this band.”

Their band is “a weird twist on a couple different genres,” King says. “We mix in kind of the old rockabilly, the faster psychobilly, but then we have pianos and keytars in it, but the overall feel is … I think we’d compare it to the Stray Cats meets Social Distortion …” Vice chimes in, “Meets Nekromantix meets … I would just, as a broad generalization, call it psychobilly/punk rock/rock ’n’ roll.”

“I would describe it as awesome,” she concludes with a big laugh. “Awesomeness on a stick!”

Vice had always loved the upright bass, and a friend working at Doo Wop Shop gave her a good deal on one. “I fell in love with it, and I love the physical challenge of it, and — I love it. I wouldn’t play anything else.”

Guitarist Climer joined the band a year ago, helping the spry King be able to put his guitar down more often, and “jump around and climb on things,” adding to the appeal of the live show.

The Vice Tricks album also documents the contributions made by their keyboardist, Evmenios Poulias, better known to fans as Dr. Evil. Poulias has returned to his native Greece, where he is a third-generation dentist in his family’s practice. Having come to the United States four years ago for a residency, Poulias joined the band a year and a half ago, having been recommended by “a friend of a friend of a friend” on Facebook.

“It was love at first sight. We practiced and it was like, ‘Oh, yeah, that’s it!” says Vice. “We miss him terribly.” Poulias is scheduled to return to Louisville for Saturday’s record release show.

“We were sad to see him go,” agrees King. “The last show we did, his friends kept bringing up shots of Drambuie. He ended up on the ground — playing with one hand, drinking with the other.”

They’re not going to replace him. “There’s no way,” says Vice. “We’re gonna rock it out as the band we are without him.” His girlfriend has roots in Louisville, so he’ll be back often.

It’s a band made up of “do-it-yourself people,” Vice says, though they’ve used Kickstarter to try to keep going. True to their worldview, they asked for $666.

Not one time, not two times, but it’s your time/

Never believe it, never receive it/

cut you like a knife ’cause rock ’n’ roll ain’t dead.

Vice Tricks with The Queers, The Manges and Stoner Moms