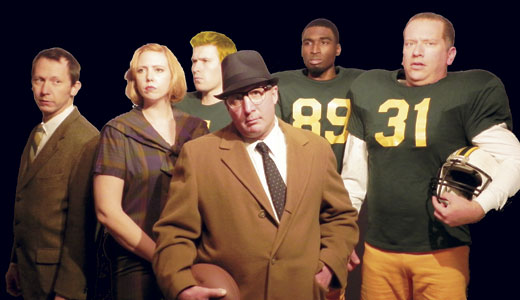 Vince Lombardi, the legendary coach who won five NFL championships in seven seasons with the Green Bay Packers in the 1960s, believed in the concept that winning isn’t everything — it’s the only thing.

His signature commitment and determination, which helped resurrect the dying Green Bay franchise — as well as the impact he had not just on the team and its community, but on the game of football and beyond — is now legendary.

This weekend, starting with a 7:30 p.m. performance tomorrow night, Lombardi’s life will come to life at Actors Theatre with the Player’s Theatre production of “Lombardi.”

The late, great coach’s story is told through the eyes of a magazine reporter who is looking on during a week of intense preparation for a Packers game. The story is about more than just football, however — it’s about Lombardi’s relationships with those who knew him best, both on and off the field.

The play also showcases the passion he had not just for football, but for shaping his players and teaching them how to be the best men they could be.

Director Joshua “Bruce” Mercer, however, says, “I feel like the story is more about the effect meeting Lombardi has on the reporter. The reporter is like everyman, like if we were to meet Lombardi.”

Parts of the story are also told through flashbacks by peripheral characters such as Lombardi’s wife and players, reflecting Lombardi’s impact on their lives. The cast is made up of actors from the Louisville area and includes a cameo from former local TV sports anchor Bob Domine as — not surprisingly — a sports broadcaster.

“My inside joke is that (Domine’s) commitment to researching his role makes Robert De Niro look like a pansy,” Mercer says. “De Niro might research a role for a year, but Bob Domine researched his for about 50 years.”

The play features Robert Florio, who appeared last year in a staged version of the film “A Few Good Men,” as the legendary coach. In a bit of an ironic twist, the role of star player Paul Hornung, who is a native Louisvillian, is played by the only Australian actor in the cast, Merwam Stevens. The actor now lives in Louisville, but has a thick Aussie accent.

“I thought, ‘What have I done?’” Mercer says, referring to when he realized the irony. But honing Steven’s dialect came fairly easy, “After I freaked out about it a little.”

“Lombardi” has not only been produced on Broadway but toured the country this year, including a stop in Louisville over the summer. The play was written by Academy Award winner and Steppenwolf Theatre Company member Eric Simonson.