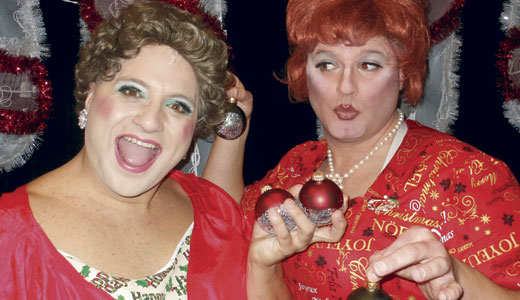 There is something weirdly fascinating about those Christmas cable access specials. No one will own up to putting the TV on that channel, but no one seems to be quick to switch it over, either — they just pretend to be really into the reindeer toe socks and gift cards they’ve just received. It’s the best when the shows are so bad or strange that they’re accidentally funny — which was part of local playwright Jim Hesselman’s baseline for his original Yuletide musical written for Pandora Productions, “Velma & Louise’s Holiday Balls.”

A pair of Lively Shively sisters are decking their halls — or basement, rather — for their cable access special when they have a catastrophe down there and no longer have a place to film it. In a panic, they call their great-nephew Nick, who is in a pinch himself with his own Christmas spectacular at his job — which happens to be a gay nightclub. They agree to join forces, even though the dear old broads don’t quite understand what kind of a venue Nicky has invited them to at first. What results is a hilariously mismatched but precious holiday jam full of glitter, endless witty double entendres and merry holiday tunes.

As the AquaNet-glazed mistresses of ceremonies, Jason Cooper and Alex Craig are fully committed and bounce off one another in perfect sassy sister harmony. A real show stealer is the dazzling drag queen Candy Cane, played by C.C. Winters, whose name may not ring a bell, but regular Pandora fans will likely recognize a familiar voice and demeanor underneath layers of sequins and synthetic hair. As Nick and his boyfriend, Steve, Robbie Lewis and Patrick Brophy have adorable chemistry and sing nicely together, too.

After a cute but long curtain speech by three energetic cast members, Trent Everett Byers and Eric Sharp set the pace for the show with an impressively complicated and impeccably timed comedic bit. It nearly seems like there aren’t enough names in the program as the members of the strong ensemble sing and dance much bigger than they appear, while looking fantastic decked out in Christephor Gilbert’s always impressive costumes. The set is shiny and gaudy in the best way and looks, well, exactly like a holiday cable access show in a gay nightclub, bathed in Theresa Bagan’s expert lighting design.

To give the audience time to catch its breath between all of the giggles, they’re serenaded with lots carols, giving the production a warm, nostalgic feel, and the band and singers are bright and solid under Doug Jones’ direction. While the show is entertaining in every sense, it contains an important message of family, tradition and acceptance. The difficulty of working such a crucial message into a show with an otherwise upbeat, silly tone is completely understandable. It would be impossible for it not to seem at least a little bit cheesy, but the way it is presented makes the end of the production suddenly deflate to an uncomfortable level of melodrama, and the bubbling energy the cast works so hard to build up seems to fizzle out. The good intention was clear, though, and the actors did what they could with it, and they were so lovable that there was no way they could lose us.