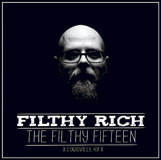 Producer, bassist and beatmaker Richard Herrell worked his contacts list to put together his first “producer album” with some of the city’s nastiest emcees. Rich’s production is dark, brooding — think Dre’s minor key melancholia with a boom-bap bend. Fifteen tracks, many of which are double- and triple-stacked with lyricists from Grimey Rhyme mainstays Nacirema, Polio, Crash DDZ, Blitz, and D.O.H., are light on hooks and heavy on face-melting multi-syllabics. There are a couple skippers: The Silkk the Shocker-isms of B. Good’s “Gone,” and the inanity of “Convictionz of Continuation,” buried in chaotic adlibs and overdubs. Instead, spend time with Mr Goodbar, @BigChetti, and Pete Sake as “Beard Gang.” Rich’s Actual People frontman CJ Prof closes the record with “Trudge On,” a flawless piece of personal storytelling that still knocks in headphones.