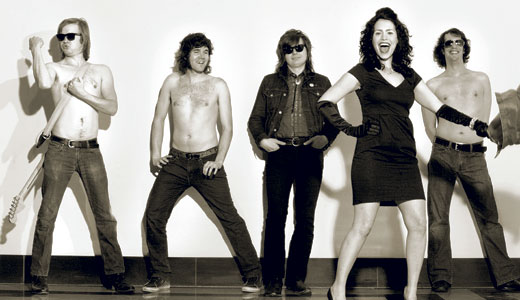 When the group of six or so musicians tossed around the idea of playing a tribute to Fleetwood Mac, tackling the Rumours album was a unanimous decision. “It’s simply one of the most important records in my life,” says Danny Flanigan, who “plays” the Lindsey Buckingham role in the tribute band. “We listened to it daily at my house growing up.” The group — made of local musicians who are solo or in a band of their own, including Kimmet Cantwell, Ray Rizzo and Natalie Bajandas — plays the songs from the 1977 record in order and in its entirety, as well as a half-dozen other Fleetwood favorites. “Playing these songs is a blast, because the songs themselves are so good,” Flanigan says. “And they trigger so many memories.” Those Damn Torpedoes, a Tom Petty tribute band, opens. —Sara Havens

Are the holidays making you feel nostalgic? On Friday, two of Louisville’s finest reunite for the first time in about seven years, as Christiansen and Ten to Midnight take the stage. Formed in the late ’90s, Christiansen were Louisville’s premier indie emo act during the early part of this century. Changing their name to Your Highness following the release of their 2004 Revelations Records release Stylish Nihilists, the band hasn’t played a show since 2005. Having formed in early 2002, Ten To Midnight covered similar, albeit garage rock-influenced material, and operated until 2007. Taken as a whole, the pair serves as a fair cross-section of a time not that far removed, but far enough to be missed. Come reminisce about the not-so old days before ringing in the new year. —Syd Bishop

With Christmas carols and wrapping paper retired and the hangover of New Year’s yet to come, how about we celebrate a holiday that’s low on seasonal gloss and instead honors three fundamentals: community, family and culture. Kwanzaa, which means “first fruits” of the harvest in Swahili, is a seven-day harvest festival celebrated Dec. 26-Jan. 1. Kwanzaa revolves around seven principles, one for each day of observance. This year’s celebration will focus on “Ujamaa,” which means “cooperative economics.” On Saturday, the Archdiocese of Louisville’s Office of Multicultural Ministry will host the 31st annual citywide Kwanzaa celebration at 11 a.m. at the Catholic Enrichment Center on West Broadway. This family-friendly event will feature music, food, prayer, African drumming and more. —Anne Marshall

Long-running punks The Queers have outlasted the Descendents, Circle Jerks and many others, and bring their particularly New England-ish sense of biting humor to the Highlands’ new favorite concert hall/billiards pub. We can’t promise that Joe Queer, Dangerous Dave and Lurch Nobody will tear through classics like “Boobarella,” “I Can’t Stop Farting” or “I’m OK, You’re Fucked,” but hey, hope springs eternal. The evening also acts as a record release show for locals Vice Tricks, profiled in last week’s issue, celebrating their first full-length. Also performing are fellow locals Stoner Moms and, from Italy, The Manges, longtime friends and partners of both The Queers and mutual-brother band Screeching Weasel. That’s a lotta attitude for one holiday night. —Peter Berkowitz

I felt so lonely, with no one to hold is how my favorite Ladybirds song begins, a sentiment we’ve all felt at least once. I was sittin’ at a bar, and that’s when he showed — OK, I can certainly relate to that. I sit at bars. He walked right over and whispered in my ear, “Baby, I’m gonna love you but first we gotta get you off that beer.” Ooooh, he gave me whiskey and wine — End of story and beginning of my love for the ’birds. Their ’50s-style rockabilly and Southern charm that songstress Sarah Teeple brings to the stage are as catchy as a cold this time of year. Spend New Year’s Eve with fine music and the friendly folks of WFPK — DJs Matt Anthony and Woodrow on the Radio — and lots of other accoutrements, including whiskey and wine. —Sara Havens

Sometimes artists do not know they can create. Ben Bridwell, who says his “background in metal fabrication and welding provided the framework from which my art … emerged,” is a good example. This self-taught, self-claimed “risk-taker” makes abstract sculpture, fountains and furniture in stainless steel and aluminum. Usually working on commission, he says he “enjoys the collaborative process that takes place when working with other artists, architects or designers for large-scale pieces.” “The textures, colors and shapes available from many metals are often taken for granted and sometimes not used to their full advantage,” Bridwell says. “It is (my) desire through art to reveal the inherent beauty within some of the metals we commonly use.” The artist reception is Saturday, Dec. 29, at 6:30 p.m. —Jo Anne Triplett

The start of a new year calls for a celebration with champagne and confetti, but for outlaw country fans, it is also a bittersweet day, as we remember the loss of greats like Hank Williams and Townes Van Zandt, who died in his mid-50s, back in 1997. To honor the singer-songwriter of classics such as “Tecumseh Valley” and “Pancho and Lefty,” Jim Porter’s hosts a tribute show in his honor every Jan. 1, with this year marking the tribute’s 10th anniversary. More than 30 local and regional singer-songwriters will be present, playing their version of Townes’ songs on two different stages. With gatherings like this (and covers of his tunes often popping up by Emmylou Harris, Willie Nelson, Merle Haggard and the like), Townes Van Zandt’s legacy and impact on country music will be longstanding. —Kelly Kettering

‘Once Upon a Holiday Exhibit’

Don’t get the post-Christmas doldrums. You know the drill: The gifts are all opened, the unhealthy food devoured, you’ve taken a few days off work, and you just don’t know what to do with yourself other than sit on the couch watching reruns of “Roseanne” while the kids play with their Lego Carnivorous Mammals of the Jungle set. Instead of sitting and staring at the flat-screen, head down to the Muhammad Ali Center for “Once Upon a Holiday,” an exhibit consisting of giant storybook pages that will transport you and your family around the globe to learn about winter celebrations from abroad. And, of course, you’ll want to stop by the gift shop while you’re there. The shopping doesn’t have to end just because Christmas is over. (Sorry, the Ali Center doesn’t have the complete seasons of “Roseanne” on DVD.) —Kevin Gibson

“We Do Photography.” That’s the motto of the PhotoForum Camera Club of Louisville. In their exhibition “Multifarious,” the photography on display is indeed diverse, as it comes from a variety of skill levels. “We are a mixture of photographic abilities and specialties,” says president Deborah Montgomery. “Some members use point-and-shoot cameras, some have elaborate cutting-edge digital SLR systems, and others use film and traditional large format cameras. Most of our members are amateurs.” Founded in 1995, the organization’s goal is to take its group of photographers with “many different origins and professions (who are) all engaged in a common photographic endeavor … to extend our photographic skills.” —Jo Anne Triplett

‘signs of life and other’

If you climb the stairs of the gorgeous NuLu restaurant to their second-floor dining room, it’s intimate, quiet and the walls are adorned with work from local artists. Their current show features photographs by Kelsey Norris, Cathy Towne, Gary Pikarsky and Michael Morris. Morris shoots professionally, but Norris, who put the show together, explains that, “For the rest of us, collecting cameras and photo equipment, shooting on film, and printing in the dark room is hobby/obsession.” Their self-printed and processed black-and-white photos include portraits, social landscapes and abandoned spaces. “I sought to bring photographers into the space who represent a diverse range of photographic interests,” Norris says, “and whose process reflects the rich history of the craft in a time when most photographs are taken with cell phones.” —Jane Mattingly