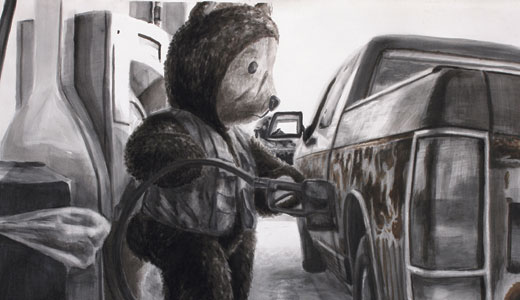 Ralphie and his pink bunny PJs have been put to bed for the year, but the holiday season at Actors is still dashing away all December long (almost). In its 37th year, “A Christmas Carol,” sponsored by Fifth Third Bank, is the second-longest consecutive running production in the country — that’s certainly nothing to humbug at. In that time, there have been 14 different Scrooges, but William McNulty holds the record of 10 seasons in the role and is back again this year for No. 11. “A Christmas Story” director Drew Fracher returned to direct both of these holiday shows for the second year in a row, having previously directed the hilarious “A Tuna Christmas.” —Jane Mattingly

Earthquake is one of the funniest people on the planet. In fact, he earned his name one night, many moons ago, when he told a joke so funny the planet actually spit molten lava through its nose crust. And from that show to this one, the comedian formerly known as Nathaniel Stroman has been deemed Earthquake. (True story.) In the years since those mythological early days, Earthquake has gone on to appear all over television and radio, including “The Howard Stern Show” and HBO’s “Def Comedy Jam,” and he has earned supporting roles in comedies like “Barnyard,” “The Longshots” and “Clerks II.” Earthquake returns to Louisville this weekend at The Improv with jokes so funny they can only be judged on a Richter scale. —Brent Owen

For the second in what will hopefully be an annual event of music-meets-art shows, Louisville’s Land of Tomorrow outpost hosts an amazing collection of multimedia work. First, there’s a for-real roller disco, featuring music from none other than techno godfather Juan Atkins. There’s also punk and local-first legend Ian Mackaye’s grouping of models showing locations that were integral to his development; a visual reinterpretation of improviser Eric Lanham’s recent album The Sincere Interruption; videos and photos of the myth that is Die Antwoord; a piece of 4AD designer Vaughn Oliver’s work, including his covers for the Pixies; Saving Our Style’s nod to hip-hop; and much more. Friday is the opening reception, and the show runs through Jan. 8. —Peter Berkowitz

If the name Cactus Truck doesn’t pull you in, the oddball depravity of their music will. Imagine jazz the way John Zorn offers it: raw, noisy and presented in an abstract way. Similar to his offerings, instruments often play independent of each other to interesting and sometimes confusing results. Of course, Cactus Truck are capable of more than trippy chaos, occasionally choosing to rein in spiraling madness for more cohesive moments. Cactus Truck, though a Dutch band, is a very U.S. and Japanese scene-minded group — think Naked City meets Melt-Banana, but solely instrumental. Expect a loud and disorienting experience of kaleidoscopic, mind-warping music. —Austin Weber

Everyone knows the holiday season should be about giving back as much as getting. Keeping with that spirit, this weekend the folks at Help Portrait will offer cameras, lights and generosity to take free photos for those in need. Help Portrait has recruited about 30 local hairstylists, make-up artists and photographers to doll up and snap all those who attend the event. Individuals and families will head home with either one free 8×10 or 4×6 print along with a CD of their images. To date, Help Portrait has provided close to 170,000 portraits in 1,520 locations and more than 56 countries. —Anne Marshall

Look at you — flipping through paper pages to get your news! In today’s world with ready access to aggregated blogs, you’ve shown the good taste to value journalistic tradition and individual voices. One of the cornerstones of journalism in our region, Al Smith, is celebrated in the new book “Kentucky Cured: Fifty Years in Kentucky Journalism.” The man himself is coming to Carmichael’s Saturday for a reading/signing. This book will introduce you to a wealth of characters that could only be assembled in our commonwealth. But you’ll also learn that public fights to support education and the arts were going on long before Rand Paul’s rise (or Mitch McConnell’s, for that matter). Newshounds have long been held responsible to serve — rather than pander to — the readership, and Al Smith has understood this privilege. —T.E. Lyons

In October, an 11-year-old Russian boy named Yevgeny Salinder discovered the remains of a wooly mammoth. It was named “Zhenya” after his nickname and is the second-best preserved mammoth ever found. Eight senior BFA art students from IUS are channeling Zhenya’s curious spirit in their exhibition of the same name. The artists will display their work, which ranges from illusionistic to abstract, at a one-night-only show Saturday. The pieces include traditional media such as oils, graphite, monotype and ceramics, and branch into installation, shadow boxes and vegetable papyrus. Like Zhenya’s discovery, this exhibition represents each artist’s own explorations in his studio. So make an expedition across the bridge and discover something new for yourself. —Sara Havens

What Made Milwaukee Famous

Winner of this week’s honorary “Simpsons” Be Sharps Award for naming a band something kind of clever that quickly becomes more trouble than it’s worth is this Austin-based indie rock group. Now celebrating a decade together with a new album, You Can’t Fall Off the Floor, being released next month, WMMF has been perpetually on the rise, playing all the major festivals, filming a set for “Austin City Limits” (one of the few then-unsigned acts featured on the prestigious showcase), and touring with Arcade Fire and the Black Keys, among others. And the name? Swiped from Jerry Lee Lewis’ song “What Made Milwaukee Famous (Has Made a Loser Out of Me).” So have a Schlitz and enjoy the sounds. —Peter Berkowitz

If you’re seeing large dancing mice and you didn’t smoke anything funny, then it must be “Nutcracker” time. It’s an annual favorite — the Louisville Ballet revamped in 2009 to add the St. James Fountain and Derby jockeys just for Louisvillians. At any given moment, the stage is filled with up to 180 people, including more than 100 children. Throw in some magic by illusionist Marshall Magoon, and you’ve got a doozy of a show. “Nutcracker” is as much an event as a dance. The Louisville Ballet is offering Sugar Plum Parties on Dec. 8 and Dec. 16 for $20 per person. And a dancer from the company will read the “Nutcracker” story at the Southwest branch of the Louisville Free Public Library, 10375 Dixie Highway, on Dec. 13 at 6:30 p.m. —Jo Anne Triplett

Spirits of the Red City

Take a dirty basement version of Edward Sharpe & the Magnetic Zeros’ quasi-Jesus lovin’ pop hymns, add the deliberate post-Dylanisms of a younger, less greasy Conor Oberst, and season with a more string-driven version of Neutral Milk Hotel’s freak-garage songs, and you’ve got a potent mixture kinda sorta like the sound of the Minneapolis-based tribe called Spirits of the Red City. Led by Highlands native Will Garrison, the family returns with a special show notable not just for the music, but also for the presentation. The Spirits will take over the Clifton stage, all acoustic, and the audience will also be onstage with the group — something like the audience will be at the back of the stage, and the group will be down stage. Like a house show in a really huge house. —Peter Berkowitz

The cooperative gallery PYRO, formerly located on the west end of Main Street (and on Hancock Street before that), has switched directions once again. It’s now on the corner of Market and Campbell streets in NuLu. The space was a Jeep dealership in a former life. I love adaptive reuse, especially when the visual arts are involved. To celebrate its new home (so new they don’t have a telephone yet), PYRO is holding its grand opening during the Dec. 7 First Friday Trolley Hop from 6-9 p.m. The exhibition “New Work — NuLucation” (they had fun with that title) is a members-only show in many media, including paintings, sculpture and photography. Stop by and say, “Welcome to the neighborhood.” —Jo Anne Triplett

There’s art for art’s sake, and then there’s this: The Carnegie Center’s latest exhibit, “Project Reclamation,” uses visual art to raise awareness about mountaintop removal mining and its impact on the environment, human health and Kentucky communities. The brainchild of local artist Mary Margaret Sparks and the nonprofit Kentuckians for the Commonwealth, the project includes a variety of mediums, from photography and video to sculpture and illustration. “Mountaintop removal mining is a divisive issue that cuts across many facets of lives across the region. It employs fathers while poisoning communities. It powers much of the region and simultaneously defaces it … By no means is this issue black and white.” Check out the diverse works of more than a dozen artists as they explore this complex, controversial subject. —Sarah Kelley