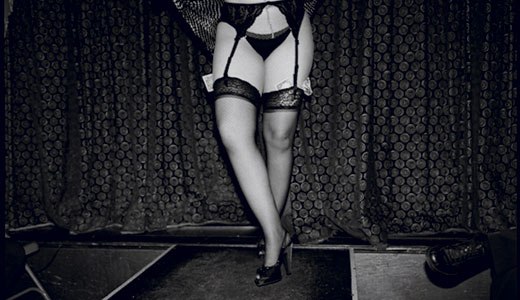 If you haven’t gotten folked lately, Uncle Slayton’s offers this four-act evening titled, well, “Get Folked.” Featuring two acts from Cincinnati and two from down the street, it’s a mostly polite evening of adult entertainment. Queen City folk-rockers Young Heirloom and blues-rockers Taylor Alexander meet up with local singer/songwriter Joel Henderson and Nellie Pearl, a supergroup of musicians from bands such as Blunt Honey and Local Villains, among others, in what could only be described as a sensuous orgy of musical expression. And if you doubt Young Heirloom’s charisma, uniqueness, nerve or talent, the band’s bio describes them as “original music at its best — beautiful, lulling and honest,” and “a new take on the evolution of folk music.” —Peter Berkowitz

In seismology, Love Waves are surface seismic waves that cause horizontal shifting of the earth during an earthquake and were named after A.E.H. Love. I’m not sure the artists behind Rock the Vibration intend to send out this kind of Love Wave, but nevertheless, it’s part of their agenda tonight at The Rudyard Kipling. A group of local songwriters, poets, visual artists and others created this event to entertain and enlighten our spirits as the year comes to a close. The night begins with a crystal bowl meditation by the Rev. Rae. Musicians include Alanna Fugate, Andrea Davidson, Kri & Hettie, Dan Bowlds and more, and the poets are Robin Bensinger, James Wallace and Matthew Presley, among others. Take a load off, literally, and let go, let God … or something. —Sara Havens

It’s the King family’s 10th Christmas since losing their Elvis-impersonating magician father — the Magistic King, as he was known — to death (or disappearance) during his nationally televised magic show. As if that’s not enough to kill a Christmas buzz, their cat Marley has just gone poof as well, and the middle son, Carter, is scrooging it up and is totally over his “lunatic” family. But, with the help of some spirits, the family tries to come together and find some Christmas cheer … in their own way. This is another original piece by Bard’s Town owner and executive director Doug Schutte, author of “Chasing Ophelia” and “Misses Strata,” and it’s back again this year by popular demand. —Jane Mattingly

It’s here: the final countdown. Only nine days left until the end of the world. Whether you believe the Mayans were onto something, or if you just want an excuse to abuse your liver Revelation-style, you’ve got to make the next week-and-a-half count. Bunbury Theatre is jockeying for a spot on your dance card with their latest production, “The Last Hanukkah Christmas.” Set on Dec. 22, 2012, the play features Holocaust survivor Klaus Klurman, who wakes up to an apocalyptic world and is subsequently visited by several spirits who take him on a holiday journey of self-discovery (much like another local, seasonal theater event). Bunbury veterans Matt Orme, Juergen Tossmann, Mike Burmester and Kristy Calmen team up to bring you this topsy-turvy original comedy, written by producing artistic director Tossmann. —Jennifer Harlan

‘Carpenters of the Forest’

Our culture has come to increasingly appreciate brevity and concision over long-form entertainment. With the advent of MP3 technology, the album has gone by the wayside in exchange for the modern pocket DJ, where we can all command our own compact hits. The “Carpenters of the Forest” event Friday at the Rudyard Kipling capitalizes on this notion that less is more by offering a wide selection of artists who cater to the iPod generation. Local luminaries Carrie Neumeyer, Piñata Me, Eremy Jirvin, Joey Mudd, David Wright, and many others are each playing short singer-songwriter sets ideal for an evening of snack-sized music. From the a cappella of the Sandpaper Dolls to the soft croon of Joe Manning, this low-key evening is especially geared to that cross section that appreciates an economic and easygoing set of performances. —Syd Bishop

Pokey LaFarge is quite an enviable musician right now. An American roots artist with an affinity for the writings of John Steinbeck and the music of Muddy Waters, Pokey has a deal with Jack White’s high-profile record label Third Man Records, with White personally producing his single “Chittlin’ Cookin’ Time in Cheatham County.” After opening for White’s band The Raconteurs last year, Pokey and his backing band, The South City Three, appeared on tracks from White’s 2012 solo album Blunderbuss, and have also spent time opening for Old Crow Medicine Show. Now promoting their most recent full-length, Middle of Nowhere (which won Best Americana Album at the Independent Music Awards), Pokey and the gang are taking their quaint country tunes all across America. Don’t miss your chance to see one of the busiest artists in the biz. —Kelly Kettering

For this week’s episode of “Late Night Disco,” hosts OK Deejays welcome special guest Chris Malinchak, a somewhat mysterious but highly regarded New York-based house and nu-disco music DJ, and a rising star of the French Express label. Currently riding a wave as his song “So Good to Me” makes its way around the world, most recently landing on British DJ Pete Tong’s radio show, Malinchak is only the latest in an increasingly long and impressive list of world-class DJs brought here by OKD. In one rare interview, he told the Miami New Times about music-making: “It is a fascinating thing. An exciting idea seemingly leaps out of nowhere. Suddenly it is real. This joy, and the pleasure of building, is indescribable.” With Amtrac and Lil Cory. —Peter Berkowitz

I love old sayings like “the cat’s meow,” “bee’s knees” and “that’s top drawer,” although half the time I’m not sure what they mean. “Top drawer” referred to importance and price, as it once meant the place in a chest where jewelry and other small valuables were kept. Today the phrase is commonly used to mean high quality. “Top Drawer” discusses the heritage of German woodworker Gustav Bittner from 1854 to the present. While thought of largely as an interior design firm today, his Louisville-based company Bittners still makes custom handcrafted furniture using techniques centuries old. The exhibition shows furniture styles as varied as Empire, Victorian and Mid-Century Modern. The private furniture collections of many locals, including the late Frazier History Museum patron Owsley Brown Frazier, are featured. —Jo Anne Triplett

Tired of staring at that crinkled “Starry Night” poster you bought for your dorm room freshman year of college? Or maybe you’re in the market for some unique Christmas gifts for friends and family who appreciate originality? Well, you’re in luck, as more than two dozen local artists will be peddling their creative wares for an affordable $20 a pop this Saturday at Art Sanctuary. There will be an eclectic array of works ranging from illustrations and handmade jewelry to coffee mugs and one-of-a-kind paintings. And to make this holiday experience all the merrier, there will be live music and libations (cash bar, you lushes) to enjoy while you shop. —Sarah Kelley

Henry Horenstein is a different type of historian — a documentary photographer. While studying to become an academic, he realized he could continue studying history by photographing it. This shifting of gears led him to the Rhode Island School of Design where he studied with such greats as Harry Callahan, Aaron Siskind and Minor White. The exhibition “Different Worlds” features selections from two previous sets of photographs, “Close Relations” and “Show.” Shot while he was still in college, “Close Relations” consists of family and friends in suburbia. A later photographic interest includes fringe subcultures, such as the neo-burlesque featured in “Show.” Horenstein continues to follow the advice given to him by a former teacher: “Popular culture should be taken seriously.” The opening reception is Friday, Dec. 14, from 5-8 p.m. —Jo Anne Triplett