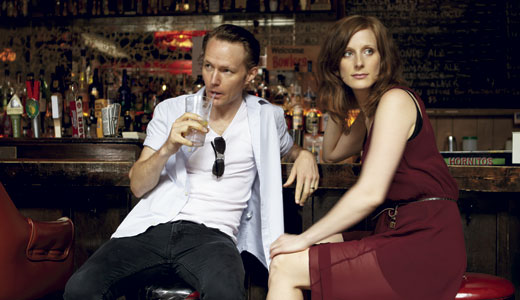 The holiday season is upon us, a time of new beginnings as another year draws to a close. This December, U of L’s Hite Art Institute also finds itself at a point of transition, as the latest class of fine arts students prepares to venture out of the academic nest into the professional art world. The 12 students present their culminating exhibition, a collection that spans a variety of mediums and demonstrates the unique visions of these emerging artists. From sleek sculptural works to portraits of Benjamin Franklin, the works are as diverse as the students themselves. Jeff Ruemeli, one of the artists, explores natural phenomena through his mixed media work. His sculpture engages with the Schuman Resonance, a group of electromagnetic resonances created by lightning strikes in the ionosphere. Ruemeli brings a humanizing, artistic eye to this scientific phenomenon. —Jennifer Harlan

This month’s temperature-controlled WFPK concert stars Whitehorse, the Canadian wife-and-husband duo of Melissa McClelland and Luke Doucet, with local support from rising singer-songwriter Justin Paul Lewis. Doucet is especially well known in his home country for his solo work and for his earlier band, Veal; his musical pairing with singer McClelland should comfort those upset about the recent break-up of the Civil Wars. Their latest album, The Fate of the World Depends On This Kiss, certainly contains more drama and emotion in its title alone than the average — well, the average anything, really. Lewis, meanwhile, is prepping for the release of his recordings with Ben Sollee and should have a pretty good 2013. Doors open at 6:30 p.m., and preferred seating is offered to WFPK members and Friends of the Clifton Center. —Peter Berkowitz

The Clifton Center presents an amazing and eclectic lineup of musicians, ranging from the bluegrass of Hog Operation to the jazz of Mike Tracy, plus nine others, at its second annual event to assist the Coalition for the Homeless. Center executive director John Harris says, “The big challenge, which was a great problem to have, is that we have so much music.” The Irish Rover, Proof on Main, Taco Punk and The Silver Dollar offer soups and stews for $4 per serving, and there will be a cash bar. All involved are volunteering their time and efforts. Donations are sought for a silent auction. The Coalition’s “Rx: Housing” will use the proceeds to move at-risk individuals from the street to housing, for deposits, furniture and necessities; 62 placements have been arranged in the past year. —Martin Z. Kasdan Jr.

It’s the end of the world as we know it and, well, you know the rest. Since the Mayan calendar has decreed that the earth shall cease to exist on Friday, it’s time now to max out your credit cards and empty your savings account on crap you don’t need. It’s also time to dance, drink and tell that person you’ve always had a crush on what you’ve been hiding all this time … in your pants. Where can you do all — or at least most — of those things? It’s the Louisville Artists Syndicate’s “The Begending.” Come out to the Mammoth to dance, enjoy art, listen to musical acts like D’arkestra, The Sweet Nothings and DJ Kid Grizzle, and generally get your party on. —Kevin Gibson

The popularity and rabid fanbase of Born of Osiris are both born of the same fact: Their music is catchy and wisely forges their influences into a distinct sound. Best known for their perfect marriage of death metal and slick, head-banging grooves, last year’s excellent The Discovery saw a slight divergence from their formula, drifting toward something more ethereal. Enduring newcomers Littledidweknow return after a slight live hiatus, spent recording their debut album, to renew bashing your head in with glee. Plus, additional local support by IIATTATIME and They Came Bearing Arms. If you’re looking for a fix, this bill is your thrill. —Austin Weber

The monthly Third Thursday series of Square Dances at AmVets kicks off with a beginners dance workshop, followed by pros (or folks who think they are) afterward. No experience is necessary, and all of the dances will be taught to newcomers. T-Claw is back to call, and the band the Paw Paw Pickers from Frankfort will show up to play some swingin’ folk tunes, and any other musicians who want to jam acoustically are encouraged to head to the bar (also home to Danny Mac’s Pizza and the world-famous “crack sticks”). AmVets members and anyone 18 and under get in free, so make it an affordable family night of fun, celebrating some regional music, dance and culture. As they say, it’s “not at all like fourth grade or your grandparents’” dance. —Peter Berkowitz

‘Writing the Big One’

The precocious and prolific filmmaking tandem Evan Sennet (15, director/editor) and Matthew Rivera (16, producer/director of photography) follow up on this summer’s impressive Flyover showing with their latest film “Writing the Big One.” The work of these Louisville-based young guns typically pays homage to the old school and has appeared in the Derby City and Orlando film festivals. Their last flick, “The Executive,” is a tribute to the silent film era, and “Writing the Big One” follows a similar cue — a film noir whose lead, H.W., is named after John Houston and Billy Wilder. The story follows a children’s book author who wants to be taken seriously as a novelist. Not to read too much into it, but perhaps there’s something autobiographical going on here? —J. Christian Walsh

If ever there was a time to embrace compassion, peace and togetherness, it’s now, and Birth 2012 aims to do just that. Through simultaneous worldwide celebrations, this movement is an effort to connect via prayer, social justice presentations, music, dance, meditation, visual art and more. In Louisville, it’s all happening at Unity of Louisville during a 24-hour community event. And because everyone knows breaking bread is a guaranteed way to promote peace, love and understanding, there will be a celebratory feast that’s free and open to all — rich, poor and everyone in between — from noon to 3 p.m. on Saturday. In keeping with the theme of compassion, all are encouraged to donate clothing, toys and personal hygiene items throughout the event. For the love of humanity, go forth and give. —Sarah Kelley

‘Exhibition at the End of the World’

If you’re reading this on Wednesday, you have two days until … what? The Mayans predicted a cycle of existence that ends on Dec. 21. With all the prophecy of doom and gloom attached to that date, Peggy Sue Howard decided it was the perfect time to have an exhibition featuring her latest paintings. Just in case, it’s best to see it while you can (it optimistically closes at the end of December). “This … solstice marks the end of the Mayan calendar,” Howard says. “The end of an era. Astrologically, the earth is exposed to the Great Rift or the Galactic Center (with) no planets or stars in the way. The Mayan calendar began 250,000 years ago. (My) new meadow paintings open windows into a past era.” —Jo Anne Triplett

My guess is that monsters have always been a part of artist Frank Peak’s life. He probably didn’t fear them lurking under his bed, but instead got up and played with them. Peak carries a sketchbook around with him now and whips it out every chance he gets to doodle fun little creatures that haunt his imagination. His current exhibit, “Merry Monster Mash Up,” is up at Ultra Pop! and features dozens of these sketches — from ghost-like figures like the ones in “Pac-Man” to cute fuzzy things with one eyeball. “A lot of this show came directly from my sketchbook,” Peak says. “I try to keep things pretty light and fun. I feel like if it’s fun for me to create, then other people might enjoy it, too.” —Sara Havens

Put a bow on one of these sculptures, stick it under the Christmas tree, and it might just scare the bejesus out of the dog. Charlotte Browning’s “CB Originals” include many types of ceramic pots and wares, but works from her collection called “knuckleheads” get a lot of notice. They should — because they will be looking back at you. “I’m known for my unique coil work and slab-built techniques,” Browning says, “but my most popular collection, ‘knuckleheads,’ express a bit of whimsy. They will win you over with a wink and a smile of their playful attitude. A reminder to all of us that our outlook on life should include some frivolity!” —Jo Anne Triplett

“You get the sense that the end of the world is a commercial project,” said a commentator when asked about the recent rise of Mayapocalypse-related profiteering in Russia. If the world does end on Dec. 21, at least it’ll happen before those January credit card statements roll in. And if it doesn’t, you’re gonna need a new calendar. And since you’ll be looking at that calendar for a whole year, you should pick up the locally conceived and produced New Devonian Calendar ($20 at Carmichael’s). With art by Peggy Sue Howard and poems by “St. David,” the New Devonian (ND) Calendar has a sweetly hopeful and celestially based approach to time. It’ll become a group-sourced project: I am told users are invited to propose names for ND months, days, holidays and pretty much anything else they’d like to see in a calendar. The website will go live on ND Day 1/1 (Dec. 21) —Marty Rosen