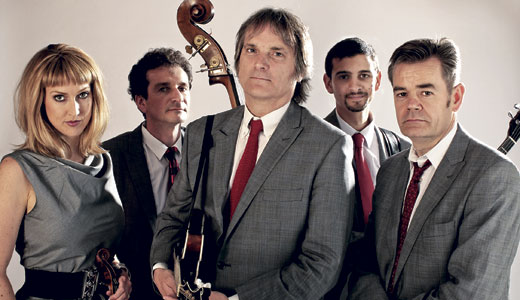 “I have made about 16 albums, so I kinda have the hang of that,” says Sid Griffin, mandolinist and singer with the London-based band The Coal Porters.

It sounds like a boast, but it’s a well-earned statement of fact. While Griffin’s success in the marketplace hasn’t always equaled the level of respect he’s earned from other musicians and serious music junkies, he’s had a long, strange trip taking him from the seedy Hollywood clubs of the 1980s to today’s London pubs. And it all started in Louisville, back in 1955.

“To me, it was a dying city growing up,” Griffin says now. “Safe, kinda fun, full of my friends, but not a very adventurous or dynamic town to me at all.”

That may have just been a child’s perspective, or a fair assessment of that somewhat dull point in history, but as he grew, Griffin found some kindred spirits.

“Years later, when I got into NRBQ and remembered seeing the Oxfords about 1970, then I realized I had it all wrong — there was local talent.” Griffin also remembers attending a Trinity dance around 1967 and seeing a band called the Alphabetical Order, whose cover of the Stones’ “Under My Thumb” received airplay on WKLO.

He also saw Motley Kru — not the hair-metal legends — at another dance. “Musically, all the local bands in bars that I saw either played covers or were not very imaginative.”

Today, Griffin says, “parts of Louisville seem so vibrant.” He attributes this to the influence of hippies, punk rockers and gays. “You got a legitimate scene happening from the very people society doesn’t really like or respect.”

Even with a family and solid career, Griffin remains an outsider. He moved to England 15 years or so ago for love. The author of two books on Bob Dylan, Griffin has also seen his identity shift throughout his life in music. With his first popular band, The Long Ryders, Griffin was a pivotal figure in the early ’80s development of what is now often called “alt-country.”

Perhaps some of his eighth-generation Kentuckian roots were coming through — he has written a book on bluegrass, as well — but on the surface, at least, Griffin was merely continuing the legacy of Gram Parsons, another subject of a Griffin book.

His current band has been around for most of those 15 years. Time has seen The Coal Porters evolve from a rock band to what Griffin calls “the world’s first alt-bluegrass band.”

“There is a small scene for American roots music in England, but not nearly as big as Americans think. Not nearly,” he says. “All these folks come over to tour here or live here three months and think they can break it like Hendrix did by coming over in September ’66 … but that so rarely works.”

Griffin has seen other Yanks draw a crowd in London and think they’re on the way up. “Then they do a tour, and in Glasgow they draw 35, in Birmingham they draw 20, and in Newcastle upon Tyne they draw 15. I mean, it is tough out there.” Even Dolly Parton has trouble playing in England outside London, he notes.

“I think The Coal Porters stand out here as we have never thrown in the towel, and hence have a good reputation building up under us,” Griffin says. They were featured recently on NPR’s “Morning Edition” and on BBC Radio 2. “Certainly we are known for having an American in the band … I reckon we are about the only British ‘Americana’ act with an actual American in the ensemble. Which makes me laugh.”

It’s a relatively good time to be in a British Americana band, as Mumford & Sons have experienced, but Griffin has seen too much to expect a repeat of that story for his band. Find the One, their eighth album, was released in September, featuring production by John Wood and an appearance by guitar god Richard Thompson. It’s another chapter in the book of Griffin’s musical life, and it won’t be the last. About his current bandmates, he says wryly, “Some of the guys were making their first or second album when they made Find the One, the newest smash by The Coal Porters.”