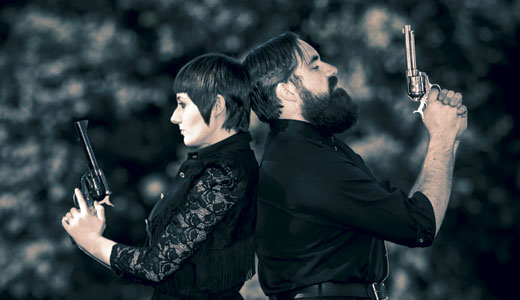 Sibling rivalry can be the fiercest of competitions, more vicious than political infighting. It’s love and hate, there’s the protective instinct, and, of course, a desire to one-up that pesky brother or sister. A sibling can somehow get closer to pinpointing your strengths and weaknesses than anyone else in this world. It’s an indescribable, unparalleled connection between two human beings.

So when Jessica Lea Mayfield and David Mayfield decided to go on tour together, they thought “The Sibling Rivalry Tour” would be a good name. But these siblings get along. Perhaps a better name would be “Sibling Bonding.” The two haven’t spent much time together lately, with both of them leading their own bands, so they chose the dates because it allowed them to travel together around the holiday season.

It’s not like they’ve never shared the spotlight with each other. They started performing together when they were young. In fact, it was a family affair — they traveled with their parents in the bluegrass band One Way Rider. Jessica was only 8.

“When I was old enough to have rational thought, about 6 years old, I knew I wanted to play music for my whole life,” she says. “I wasn’t one of those kids who was like, ‘Oh, I’m going to be an astronaut and a guitar player and a priest and a Mormon and a nurse.’”

Music is what both have done ever since. While she admits the lifestyle of a traveling musician is less glamorous than she initially imagined, Mayfield says she’s never taken her eyes off this path.

Fortunately, working with her brother and her husband has helped keep her comfortable during her creative process. Both have played in her band and toured with her at some point since her debut full-length, With Blasphemy So Heartfelt, in 2008. Mayfield has also enlisted the help of The Black Keys’ Dan Auerbach, who produced her debut and 2011’s Tell Me, both of which express a sort of quiet turmoil.

Mayfield says she only writes about personal experiences, but she’s mostly driven to create when she’s angry or tense. And even though she’s still in the honeymoon period of her new marriage, she’s inspired to write her contemplative folk tunes in the worst moments.

“I’ve noticed that I’ve been writing about things like anger and sex and all other different aspects of my marriage that aren’t the good ones. Because when I’m having good experiences, I’m going to go have fun. If I’m having bad experiences, I’m going to slam the door and do my own thing and be creative. It’s hard to be creative, at least for me, when I’m in a good mood. Because I’m just like, ‘OK! Let’s go get ice cream and go see a movie.’ I almost need a little bit of turmoil.”

She plans to self-produce for the first time on her third release. She’s working with her brother and husband at home in Kent, Ohio, on some of the new material. While it’s been nice to leave the grind of constant touring behind to work on new ideas, Jessica Lea Mayfield is ready to get back on the road.

“You can only appreciate watching Netflix naked so much. If it’s just one day a week, it’s all right, but if it’s every night, it’s like, ‘Aw, man, I need to get back out there.’”