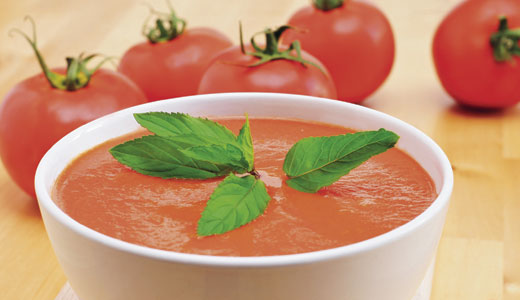 When you talk about food and you talk about love, the conversation, like the relationship, often starts on a Valentine-y note: chocolate truffles, strawberries, champagne. If the relationship is long term, the discussion turns to hearty foods, full of sustenance: slow-braised meats and chicken pot pies, soups left to simmer on the stove.

This past summer marked a couple of milestones for my husband and me: a long-awaited career transition for one of us; for the other, the fact that our marriage had outlasted my parents’. In different ways, both of these events marked a stepping off into unknown territory. That was the context in which my husband and I leapt into an unexpected affair with a summertime dish — gazpacho, cool and tangy, bright on the tongue, visually stunning in the bowl.

It all began innocently in May, around the time Jeff graduated from the Kent School with a master’s degree. We were planning a dinner party and testing out recipes when I delved into the Cook’s Illustrated online archive and turned up a recipe for Andalusian-style gazpacho. Once we made the soup the first time, there was no going back. We became steadfast lovers, maintaining the passion from one Saturday farmers market to the next, where we bought gifts of Cherokee Purple heirloom tomatoes and Candy Apple red onions to give to our beloved. Our devotion lasted throughout the summer and well into fall, until tomato season finally waned. Even then, we lingered for a final weekend or two, unwilling to give up our summer love.

Perhaps it’s easiest to explain the allure of this recipe in sensual terms. This gazpacho is creamy without containing a drop of cream — just four or five pounds of the season’s best vegetables, a crustless slice of white bread, a half cup of extra-virgin olive oil, and couple of tablespoons of sherry vinegar to brighten up the flavors. The soup goes through a rainbow of colors on its way to its final form. Red and green vegetables, roughly chopped and thrown into the blender with a slice of bread, form a puree the clear red of ripe tomatoes. But then you pour extra-virgin olive oil into the whirring blender in the thinnest possible stream, and that’s where the magic happens. The oil emulsifies, and the red hue softens into the mellow orange of a ripe persimmon.

The finished soup is perfection itself. It’s glossy. It’s silky. It has body and hidden depths. Drizzle a stream of olive oil over its opaque surface, and the oil forms a window into the soup’s interior, where gemlike bits of green pepper and purple onion float, suspended, along with a confetti of flat-leaf parsley and basil.

To watch the soup come together is to witness a tiny miracle, which seems fitting given the context of our lives. Jeff’s mid-life career change was coming to fruition after seeming unattainable for years. He had worked in technology publishing his entire career, earning a good paycheck but never feeling a passion for the work. His undergrad degree was in psychology, and his urge was to help people in need, but the path to a transition was anything but clear. Three years prior, when Jeff began pursuing his degree in social work while still working full-time in the tech world, we couldn’t quite see how he would actually pull off the leap.

Through a series of fortunate events, including the perfectly timed sale of the tech company, the pieces came together. In the spring, he completed his degree. Over the summer, he took the risk of delaying his entry into the job market, creating an interlude of rest between grad school and his new working life. Late summer, just when the tomatoes were peaking at home, we were in Colorado — where we insisted on making gazpacho despite the marked inferiority of high-country tomatoes — when he learned, long-distance, that he’d landed a full-time job back home. The progression seemed like a miracle of its own, and we could track it beat by beat with our summer of gazpacho. If that sounds irrelevant, it wasn’t. Not at all.

Perhaps because Jeff’s working life was in such a tenuous and hope-filled place, we felt especially close this summer. It was a milestone year in another way as well. My parents’ marriage had fallen apart in year 17, which meant that Jeff and I, nearing our 18th anniversary, were entering a territory no one in my original family had ever explored. We were pioneers. Many nights we sat at the table on our screened-in deck, talking about the almost-arrived future over a bowl of chilled soup.

The triple pleasures of gazpacho, the deck and conversation became a favorite ritual, so much so that we actually began to prefer it over eating out. One evening, when we’d intended to go out to dinner to celebrate some milestone in Jeff’s journey, I stopped on impulse by Paul’s Fruit Market on the way home. When Jeff saw me walk in the door carrying a loaf of Blue Dog pugliese, he broke into a smile. “I was thinking exactly the same thing,” he said, and without another word we tossed aside our restaurant plans and opened the refrigerator, where a big glass bowlful of gazpacho awaited. A little leftover salami, some good cheese and grapes, a bottle of red wine, and we had a feast.

Sitting on the deck, with no distractions beyond the chirping of birds in the walnut trees, Jeff and I drizzled sherry vinegar and olive oil onto the gazpacho from the glass cruets he had found for $4 on sale. A twist of the wrist drew an arc of oil on the surface of the luscious orange soup. To the two of us this past summer, that was what happiness looked like.