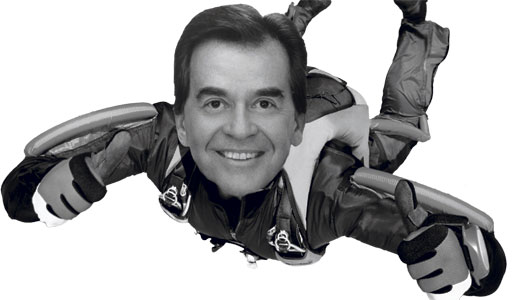 "Only a good-for-nothing is not interested in his past.” —Sigmund Freud, the father of psychoanalysis

At the dawn of 2012, anyone might reasonably have expected the coming year to be unpleasant. The economy was struggling, there was a jobs crisis, and Rick Santorum was being seriously considered as a candidate for president. Adding to the dread, the Supreme Court had already guaranteed an avalanche of electile-dysfunction advertising. And Steve Jobs and Christopher Hitchens were both dead. Even the Mayans said we’d never get out of the year alive. How could 2012 not blow?

And, indeed, there were some seriously sucky moments, and not just for former CIA Director David Petraeus. Gun violence continued to bring sorrow to our society. Tornados ripped through Indiana and Kentucky, and Hurricane Sandy attacked the East Coast. Things got so weird that Clint Eastwood lost a debate with a chair.

And yet, there were also many magical moments. In the good news department, President Obama coasted to re-election, riding on the coattails of gay marriage and recreational weed. And both the Cats and Cards made the Final Four (with the Cats winning the right to set ablaze the ceremonial championship couches). We also finally learned the true cost of Obamacare: a surprisingly affordable 14 cents per pizza. And “Fifty Shades of Grey” made butt plugs fashionable again. All in all, it was a very memorable year. But how closely were you paying attention to the news? Take our 2012 quiz and find out!

1. Chief Justice John Roberts led the Supreme Court in ruling that Obamacare was constitutional on what grounds?

2. Who said, “We will never have the elite, smart people on our side”?

____ A. Televangelist Pat Robertson, in an expletive-filled rant captured by a hidden camera

____ B. Joe Biden, at the vice presidential debate in Danville

____ C. Rick Santorum, speaking at a “Values Voters Summit” in Washington in September

A. Ugandan guerilla leader, religious psychopath and terrorist who caused much Twitter-wringing in 2012

B. Los Angeles bank-fraud convict, religious psychopath and filmmaker who made the YouTube video “Innocence of Muslims” under the pseudonym Sam Bacile

C. Chick-fil-A president, religious psychopath and anti-LGBT fundraiser who said “We’re inviting God’s judgment on our nation when we shake our fist at him and say we know better than you as to what constitutes a marriage”

E. Indiana treasurer, religious psychopath and losing Senate candidate who said pregnancies resulting from rape were a “gift from God”

8. In a book called The Bible, there is a story with a character named Jesus Christ. Many people believe Jesus actually lived, 2,000 years ago. In 2012, an ancient papyrus surfaced revealing what new detail about Jesus, according to Harvard Divinity School professor Karen King?

____ C. In addition to the loaves-and-fishes miracle, he also invented the Hot Brown.

____ D. He performed a previously unknown miracle: recruiting a big man who could shoot the three.

18. eBay and Tesla billionaire Elon Musk’s company SpaceX made what notable achievement in 2012?

____ C. The AKIN telescope, the first telescope capable of looking far enough back in time to glimpse the worldview of U.S. Rep. Todd Akin, R-Mo.

____ D. The first private company to send a space capsule to the International Space Station

19. What is “Americans for a Better Tomorrow, Tomorrow”?

____ B. The medical-marijuana lobby responsible for legalizing cannabis in 19 states

20. In a provocative Atlantic article and subsequent book called “The End of Men,” author Hanna Rosin claims the future belongs to women because of what trends?

____ A. Women now outnumber and outperform men in both college and the workplace.

____ B. Rapid advances in stem-cell technology are “making the penis and testicles obsolete.”

____ C. Studies show that, “If he’s a legitimate man, the female body has ways to try to shut that whole thing down.”

21. What did Mitt Romney say that led many to believe he doesn’t care about those who aren’t rich?

35. What is the Keystone XL Pipeline?

____ A. A line of vaporizers popular among medical-marijuana patients

____ C. A controversial proposed oil pipeline extension from Alberta, Canada, to the Gulf of Mexico

36. What did President Obama privately tell Russian President Dmitry Medvedev, captured by microphones in March, setting off a firestorm of criticism?

____ A. “Bill Clinton said to ask you if he can get in on a little of that Pussy Riot action.”

____ B. “No one in America wants to admit it, but you’re totally kicking our asses in the space race.”

____ C. “After my election I will have more flexibility with missile defense.”

____ A. A museum in the west Louisville boyhood home of Muhammad Ali

____ B. A Biblical-themed amusement park called “It’s All Eve’s Fault” to Sparta

38. Which of the following Louisville bourbon-related enterprises is fake?

____ A. There is really nothing more curative than a good Tom Yum Goong, five stars

____ B. We should embrace nonviolence and not take our rights for granted

____ C. That our senator is not really such a sad little turtle

A. Super skeezy Louisville allergist and hate-group president disciplined by the Kentucky Board of Medical Licensure in September for over-prescribing controlled substances

B. Super skeezy CEO of Answers in Genesis, which has been beset by fundraising problems and construction delays on its Ark Encounter theme park

D. Millionaire college student from Texas who is spending his inheritance buying influence with Tea Party candidates across the country, including Kentucky Rep. Thomas Massie

E. Brave Louisville teenager who made national news after she tweeted the names of her attackers in a sexual assault

F. Heroic Henryville, Ind., mom who lost her legs protecting her children during a massive tornado in March

46. Which robber baron flipped land to the federal government to build a new veteran’s hospital in Louisville, turning a sweet $8 million profit for himself on the broken backs of injured soldiers?

____ A. A foodie trend in NuLu based on the cuisine of homeless shelters

____ B. A term for local freelance artists, writers and technology workers who pool their resources in former tobacco warehouses

____ C. The biological barrier that keeps rape victims from getting pregnant, as described by Rep. Todd Akin, R-Mo.

____ D. A euphemism for “stay inside” used by officials after a train derailment caused a poisonous-chemical leak near West Point

55. What move did WDRB make in June that had Louisville media circles in a tizzy?

____ A. Banned an episode of “The Big Bang Theory” because it “promoted sexual promiscuity and evolution”

____ B. Aired a “Point of View” segment featuring a shirtless Bill Lamb brandishing a sword and declaring himself “King of Louisville Media”

____ D. Announced that ’70s stars J. Fred Frog and Hunny Bunny were jumping to the C-J to cover the sports beat

56. Professionally crafted journalism is to user-generated content as Jack Fry’s shrimp and grits is to _______

57. The Courier-Journal made what risky move in May?

____ A. Replaced “The Incredible Inman” with a link to Google

____ B. Reanimated John Ed Pearce for a commemorative section, “When We Did Journalism”

____ C. Made fricassee out of the Deal Chicken

58. After its May initial public offering of $38, why did Facebook’s stock price plummet to half that value?

____ B. Lack of a perceived coherent mobile strategy

59. Which prognosticator stunned the media world by accurately predicting all 50 states in the presidential election?

60. After writing seven Harry Potter novels, author J.K. Rowling published an adult novel in September. What was its title?

61. 21c Hotel made news in May with what installation?

____ A. A controversial “smellovision” exhibit called “Socks of a Teenage Boy”

____ B. An all-nude staging of Dante’s “Inferno” in a store window on Main Street

____ C. A paintball re-enactment of the Trojan War

____ D. A 30-foot gold replica of Michelangelo’s “David” on the corner of Seventh and Main

62. When thunderstorms delayed the Forecastle Festival by an hour, My Morning Jacket gave what consolation prize to their waterlogged fans?

____ A. Umbrellas made out of hair they quickly grew on the spot

____ C. An impromptu acoustic set under the I-64 overpass

____ D. A cover of John Denver’s “Sunshine on My Shoulders,” featuring Kevin Harned on lead vocals

____ A. A wildly successful fashion trend in Paris based on gang colors

____ B. The first No. 1 smash hit song by an infant: Jay-Z and Beyonce’s daughter Blue Ivy Carter

64. Which celebrity made a controversial virginity-losing-themed ad called “Your First Time” aimed at getting young women to vote for Barack Obama?

65. Who said, “I hope I don’t see a bunch of wedgies at the waterpark. Vajiggle jaggles gonna be hanging out, though.”

____ A. Texas Gov. Rick Perry on a campaign stop in Williamsburg, Va.

66. Where did the NFL find the replacement referees it hired during a labor dispute?

____ B. Dr. Bizer’s School for the Visually Impaired

67. Baseball’s Jamie Moyer made what notable achievement in 2012?

____ A. He became the first player to use the Higgs boson to throw a strike before the pitch left his hand.

____ C. He threw a perfect game, which was certified “legitimate” by Rep Todd Akin, R-Mo.

____ D. He became the first player to throw back-to-back no hitters.

68. The International Cycling Union stripped Lance Armstrong of his seven Tour de France titles after the U.S. Anti-Doping Agency charged him with doping and drug trafficking. What substances did he and his team use?

____ A. A cocktail of anabolic steroids known as “The Cream and The Clear”

____ B. The blood-booster EPO, steroids, blood transfusions and testosterone

69. Olympic target shooter Josh Lakatos told ESPN, “I’ve never witnessed so much debauchery in my entire life!” What was he talking about?

____ A. A wanton night on the town he had with Ryan Lochte and Prince Harry

____ B. The Spice Girls’ performance at the closing ceremonies

____ C. The culture of sexual promiscuity among athletes in the Olympic Village

70. The University of Kentucky men’s basketball team’s national championship run (including a semifinal win over U of L) inspired what other newsworthy feat?

____ A. A fight between two patients — one a UK fan and one a U of L fan — at a dialysis clinic in Georgetown

____ B. The burning of at least 12 couches, according to Lexington police

71. What was the inspiration for Kentucky Derby winner I’ll Have Another’s name?

____ A. The horse’s penchant for small swigs of beer given to him by a groom

____ B. His trainer’s recovery from sex addiction

____ D. The addictive nature of Oxycontin, which is made by the horse’s corporate sponsor, Purdue Pharma

2. Only one answer per question, one submission per person.??

4. LEO Weekly is not responsible for entries that are late, misdirected or otherwise fouled up, including any befouled by computer or network malfunctions, congestion or lethargy. Such entries will not count.??

5. The top three winners and quiz answers will be published in the Jan. 16 issue and at leoweekly.com.