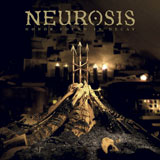 As an originator of post-metal, Neurosis led the way to a new songwriting aesthetic. It’s a mix of post-rock, heavy riffing and shoegaze, where beauty and emotional depth light up dark and often ugly music. Honor Found in Decay show them with nothing left to prove, but with a lot left to give. The keyboards and soundscapes by Noah Landis add a scintillating veneer, like the haunted bagpipes added to “At the Well” that makes the album a powerful force. Another highlight, “We All Rage In Gold,” overflows with folk smoldering up to cinematic synths as distant bells collide into molasses’ thick sludge. Honor Found in Decay is heaviness with heart, an album that’s artistic but not pompous.