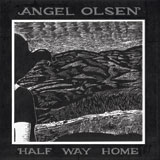 Vulnerable” doesn’t even begin to describe the voice of Angel Olsen. Thought I was cool, turns out I’m a fool/Clearly you’ve proved me wrong, she croons with a tone both elegant and frail on “The Waiting.” The title is a poignant one for a woman who was given up for adoption as a girl too young to take care of herself but old enough to know who her birth family is. The raw sound of her voice on songs like “Lonely Universe” and “Always Half Strange” can startle and bring tears to your eyes at the same time as her voice beautifully quivers and quakes. “Acoustic” doesn’t begin to describe her music, either. The beat of a drum, the pluck of a guitar — each note has carefully been selected for its accompaniment to her voice.