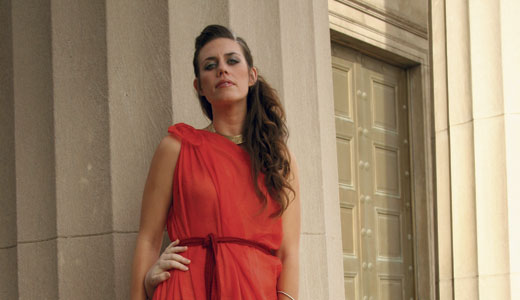 “Lysistrata” is a play you may or may not be familiar with in this modern age of Neil Simons and David Mamets — but it’s one of the oldest surviving Greek comedies. Often overlooked, the play is rarely performed on any stage outside of a college level theater class. Dating back to 411 B.C., the story by Aristophanes is a raunchy, sexy satire of politics and war and is often lauded for its advanced views in regards to women and their societal roles.

Lauren Argo, who will be playing the title role in Savage Rose Classical Theatre Company’s upcoming revival of the play, sat down with me last week at Quills in the Highlands to discuss her enthusiasm for the production. You may remember Argo from a performance piece she did a couple of years ago where she lived in the window at 21c for three weeks. “I’m really excited,” she says. “I have been wanting to play this role pretty much since I heard the story. My last name, Argo, is Greek, so I’ve always had an interest in figuring out what a woman’s perspective in that time would have been.”

Thematically speaking, it seems like the content of such an ancient sex romp would be challenging for an actress who comes from a religious background in Cynthiana, Ky. “Yeah, being the sex play, it’s a little different,” she chuckles. “But they all know what I do, they’re very supportive, and I keep them in mind when I choose what I’m going to do. I know I’m representing my family and the people of Cynthiana whenever I do something. So I won’t do anything that isn’t true to who I am — who I am is where I came from.”

The two main roles, Lysistrata and Calonice, are a wonderful projection of poise and ambition that didn’t often exist for women of an era two and a half millennia ago. “The stakes for them are extremely high,” Argo says of the backdrop of the Peloponnesian War that frames the story. “The war has gone on for so long by the time the play picks up, everyone is exhausted, they want it to be over. For them, the stakes are higher because the war is in their backyard. But there are still women with their husbands away at war today, so it’s a story that never really goes away. There’s an inherent universal theme to the story. But the way it’s all handled is absolutely hilarious.” At risk of over-simplifying the plot, “Lysistrata” manages to prove that no matter how powerful a man may be, he will always be eclipsed by the power of a woman’s sexuality.

“What we know from surviving texts,” Argo says, “this is the first play that brought the theme of sexuality and power into the public space.” It’s a fact that is often illustrated with comically exaggerated phalluses on the actors and over-inflated breasts and backsides on the actresses, which, in retrospect, almost seems like a poke at the different perspectives of beauty from then until now.

“Lysistrata” runs for two weeks at the MeX Theater at Kentucky Center, so don’t miss your opportunity to catch a rarely performed play that’s so comical, we’re still laughing at the jokes 2,000 years later.