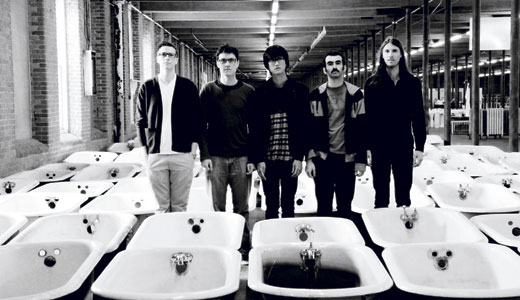 There aren’t a lot of jazz musicians who are also good at marketing their music, but Father Figures’ leader Adam Schatz has found a hook. The band explains that “Zombie Jazz” is a name “… we made up to describe the music we made up: instinct driven. Wild when it wants to be, other times deliberate.” It certainly gets more attention than simply stating, “We’re another jazz band,” which they definitely aren’t.

Father Figures are five musicians with training and interest in jazz, rock and other forms of musical expression. Now based in Brooklyn, they came together in 2006 having met in music school at NYU, intending to form a mostly improvised group who sounded so in sync with each other that the audience would assume they were performing already completed material. “And all the while, we move toward the collective goal of listenability, fun and spontaneity.”

When they’re not having fun together, the members have also sat in with a diverse group of newer artists in the indie rock and electronic scenes, such as Matthew Dear, Buke & Gase, Hospitality, Those Darlins and Adam Green. When LEO spoke with Schatz recently, he had just been in the studio with cult favorites Man Man working on their upcoming album.

They come through Louisville on a brief tour heading from New York to New Orleans, hitting bars, art galleries and colleges in lieu of traditional jazz clubs. At Oberlin College, they’ll also be leading a workshop.

“One of the cool things about this tour is that we can do a lot of sides of the equation,” Schatz says. “We were sort of having a crisis in rehearsal, saying, ‘What are we going to be able to teach college kids?’”

They’ve led workshops before, teaching improv to high schoolers, but this will be their oldest group so far. They show students how they use physical cues to communicate with each other while improvising, then let students try before the band joins in with the kids. “It should be great, I don’t have any sincere fears about it,” Schatz continues, “but it’s funny when we’re in the basement, making each other laugh and being ridiculous, and then thinking about how we’re going to be teaching people.”

It’s their chemistry, in the basement and onstage, that keeps them going, says Schatz, despite the financial difficulties involved with such music. Having met in college, Father Figures has given them an excuse to stay friends, and a home base to return to with new tricks learned playing with others.

“I think audiences really connect with that, and I think it’s super-apparent that we want people to have as much fun listening to us as we do playing the music.”

Their latest release is an EP called Bad Bad Birds, and it’s available through their Bandcamp page, as is their self-titled debut album. They know they’re selling themselves to a younger audience, one infrequently attentive to jazz music. For this tour, they’ve also handmade unique beak creatures, akin to sock puppets, which contain copies of the EP in a USB port stored on the beak’s tongue. It’s music with a history, file-shared in a brand new way.