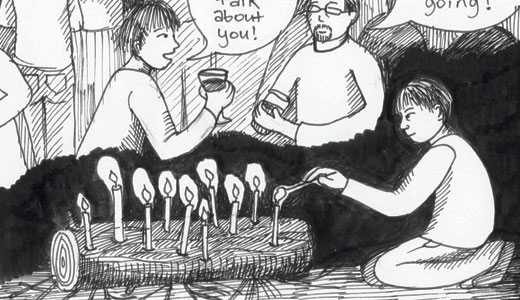 Carrie Neumayer has pursued three things over the past 15 years and has learned that, sometimes, something’s got to give. She began making art and music while still in school and struggled to continue when she became a JCPS art teacher. “Teaching in the system is rewarding in many ways, but it’s a ridiculously demanding career with lots of bureaucratic roadblocks, and it can zap a lot of one’s emotional and creative energy after a while,” she says.

After eight years, Neumayer decided to find a less conventional approach to working as a teacher, one that would also help her get back in touch with her own art. Working as a teaching artist-in-residence with organizations like the Louisville Visual Art Association and the Kentucky Museum of Art and Craft has allowed her more flexibility and variety, and less systemic stress.

Her passion for art has also been turned back on by tackling illustration work for publications like Bitch, Louisville Magazine and LEO. “I absolutely love the challenge of reading a story or article and then coming up with a unique visual concept to accompany the text,” Neumayer says. She’s also returned to her ongoing project, a semi-autobiographical mini comic book series called “Lyra” that she started in high school.

The 10th issue will be available at this Saturday’s “Holiday Bazaar” at the Mammoth, a celebration of local arts and crafts that also allows for last-minute holiday shopping. “In high school and college, the themes in ‘Lyra’ generally revolved around friendship, trying to find oneself, and the general discomfort in being a young person,” Neumayer says. “The 10th issue is definitely the closest to being purely autobiographical.”

The 32-year-old kept a comic-style diary almost daily in 2011, which inspired issue No. 10. Older and wiser, Neumayer says the stories this time deal with career struggles, “still trying to find oneself, and the general discomfort in being a slightly older person.”

“I think of my comics simply as short stories with pictures,” she adds. Her stories are everyday, real stories, and she enjoys reading others who work that way, like Jeffrey Brown and John Porcellino. “Sometimes they are funny or silly, sometimes they are serious — generally not big dramatic events that you’d find in a superhero comic or a sprawling graphic novel.

“I love the quiet, personal experience one can have by looking at still images and reading handwritten words on a printed page.”

Less quietly, she’s also playing in three bands. Her guitar and vocals are featured in Second Story Man, which started back in the late 1990s, and Julie of the Wolves, an all-female quartet begun in 2011. The latter recorded nine songs this month at Treehouse Audio, with a spring release planned. A new, currently unnamed band includes her on bass, alongside fellow musicians and visual artists Amber Estes Thieneman, Nick Thieneman and Ben Sears.

Though she earned a BFA in fine art, with a painting concentration, at the Art Academy of Cincinnati, Neumayer taught herself to make comic books. “I just knew I liked to write and I also liked to draw, and after being introduced to the world of zines and comics that were less traditional, I thought it would be a good medium for me. It seemed like there were no rules, or one ‘right’ way to make comics.”

The Mammoth’s free “Holiday Bazaar” is Saturday at noon at 744 S. 13th St. Go to facebook.com/themammothlouisville for more info.